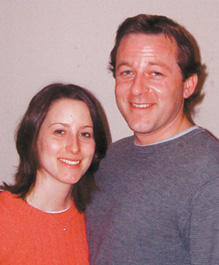 Diane Jane Myer, daughter of Paul and Dr. Bayla Myer of Chesterfield, Mo., and Patrick William Keefe, son of Frank Keefe of Chesterfield and Julie Wiegand of Richmond Heights, Mo., have announced their engagement. She is the granddaughter of the late David and Bertha Miller of Bangor, Maine, and the late Jesse and Naoma Myer of University City, Mo., and Charlotte and the late Marcus Brown of Ladue, Mo. He is the grandson of Patricia Ann and the late Richard Keefe of Richmond Heights, Mo., and Claire and the late Frank Wiegand of Chesterfield, Mo. The bride-to-be is a graduate of Parkway Central High School and Washington University, where she earned a bachelor’s degree in psychology, and the School of Public Health at St. Louis University, where she earned a master’s degree in healthcare administration, and Saint Louis University School of Law, where she earned a juris doctorate degree. She is currently an attorney in the law firm of Donovan, Rose, Nester & Joley, P.C., in Belleville, Ill., where she specializes in health law. Her fiance is a graduate of Lafayette High School and the University of Missouri, where he earned a bachelor’s degree in political science, and St. Louis University School of Law, where he earned a juris doctorate degree. He is currently a partner at the law firm of Keefe and Keefe, P.C., in Chesterfield, where he specializes in business transactions and litigation. A May wedding is planned.

The bride-to-be is a graduate of Baraboo Senior High School and U.W. Stout, where she earned a bachelor’s degree in science. She is currently an executive of Federated Department Stores. Her fiance is a graduate of Ladue Horton Watkins High School and the University of Colorado, where he earned a B.A. degree in economics. He is currently a financial adviser. A Spring wedding is planned.