Your reviews are in: JTA readers grade ‘An American Pickle’ 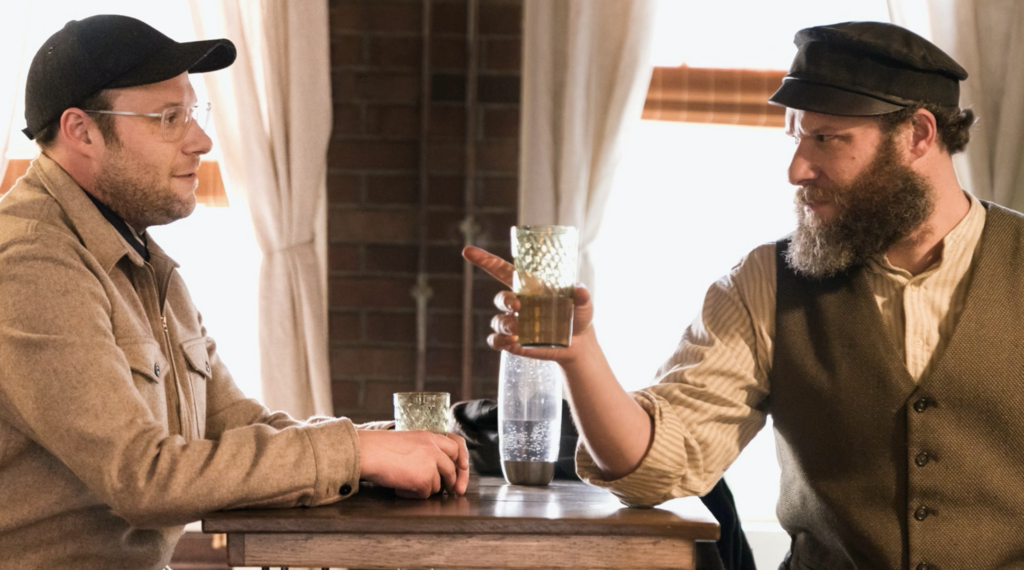 (JTA) – There was already some buzz around “An American Pickle,” the biggest Jewish movie of the year, before the movie’s star Seth Rogen made comments about Israel that seemed to set the Jewish internet on fire.

In the new movie, Seth Rogen plays Herschel Greenbaum, a Jewish immigrant who is preserved in pickle brine for 100 years and emerges to meet his app developer great-grandson Ben, also played by Rogen, in modern hipster Brooklyn.

The movie seems to exist in a world where Israel doesn’t exist – Herschel Greenbaum fell into the pickle brine before Israel was founded and Ben doesn’t seem to think it’s important to tell Herschel about all the Jewish history that’s transpired since.

But the movie was released into a world in which Israel certainly does exist and where opinions about its existence rankle. So perhaps it’s no surprise that Rogen’s Israel comments made it into some of the reviews that JTA offered one week after its release.

After the movie was released on HBO Max last week, we asked JTA readers to share their impressions of the movie with us. Some decided not to watch the movie at all after Rogen’s Israel comments while others were happy to watch the hour and a half long pickle and seltzer-fueled comedy.

Here’s what you need to know before you watch the pickle movie this weekend:

Good for the Jews

“Loved it; the perfect thing to watch with your Jewish family when Fauda is too intense for your mom.” – Joseph Eherenkranz, New York, New York.

“Sweet but Rogen should have introduced the benefits of weed to Herschel.”–  Richard, Los Angeles, California.

“It was ridiculous but an exquisite escape from my political and pandemic obsessed life and it had a very satisfying ending.” – Judy Simon, Monterey, California.

“This movie, that made me cry and respect Seth Rogen as an actor, was surprisingly entertaining and heartfelt, despite how terrible it sounds on paper.” – Susan Wolper, New York.

“A funny and surprisingly heartfelt movie that touches on the nature of family, legacies, and the ways Jewish folks honor both.” – Joseph Freundel, Cambridge, Massachusetts.

“An American Pickle ranks with Fiddler on the Roof and Yentl–among others as one of the most Jewish films ever.” – Danielle Solzman, Chicago, Illinois.

“Loved the movie, made me want to eat matzo ball soup.” – Jaden B., California.

“Man that sucked! What an embarrassment!” – Eric Leibman, Portland.

Bad for the Jews

“The movie was lame – not really funny. Herschel was portrayed as an angry Jew prone to violence. The woke Seth Rogen was the good guy with a silly ending. I give the movie 1 sour pickle out of five.” – Mike Hilert, Burke, Virginia.

“No mention of 2 of the most dramatic and important events that transpired in Jewish history; no wonder Seth Rogen does not understand why Israel is so important to most Jews.” – Micha Danzig, San Diego, California.

“The 90-minute therapy session for Seth Rogen, in which he acts like a spoiled child on a tantrum, never breaches the surface of the intergenerational disconnect it aims to explore.” – Roei Eisenberg, Los Angeles, California.

“This movie is an embarrassment and is mediocre on every level — poorly conceived, poorly written, poorly acted, poorly directed, and poorly cast (should I continue?).” – Harvey J. Kirsh, Toronto, Canada.