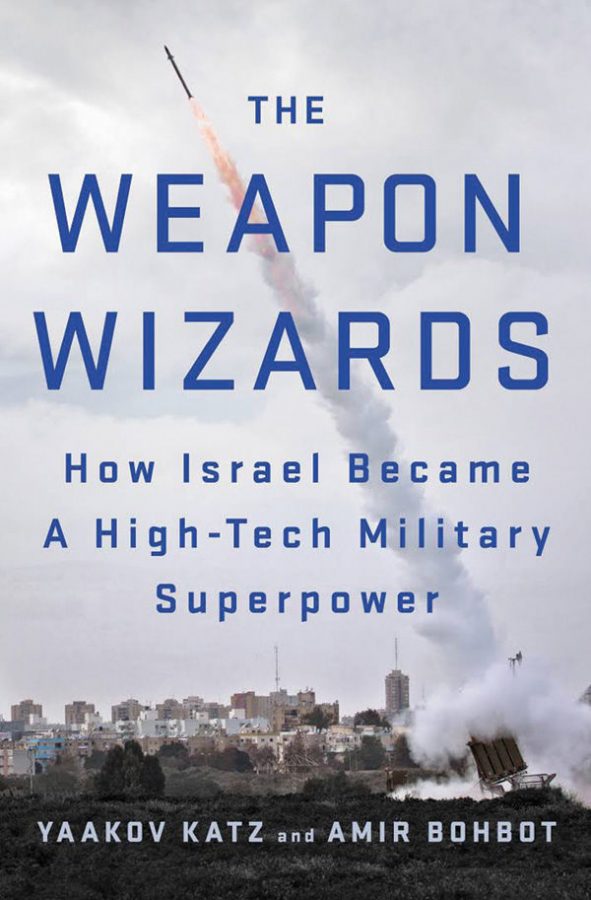 In the mid-1940s, before he became Israel’s founding prime minister, David Ben-Gurion realized a fundamental fact about the country that the 1948 War of Independence would create: When it came to weapons, Israel could rely on no country but itself.

Seven decades ago, though, Ben-Gurion’s existential idea was one of those “ah ha” moments that has been an essential part of the Israeli psyche.

The authors are journalists who know how to tell engaging stories about generals and soldiers, engineers, bureaucrats and politicians. According to the book jacket, Yaakov Katz, a native of Chicago, is editor-in-chief of The Jerusalem Post. Amir Bohbot is senior defense analyst for Walla, Israel’s leading news website and has covered military affairs for Maariv.

They explore the theme of self-reliance throughout this short book. They explain, albeit in sometimes too much detail, how Israel has become a military superpower in the Middle East and a leading arms developer in the global arms race.

The story is almost always the same. A threat to national security arises and clever mid-rank officers and civilians (with active and reserve experience in the Israeli Defense Forces) come up with solutions, often by breaking the rules with chutzpah.

From the earliest days of Israel’s existence through recent cyberattacks on Iran’s nuclear facilities, these military and technical innovators have found a way to overcome or push back the threats.

Take this early example from the 1950s, when Israel began manufacturing its own rifles. In trials, the bullets “blew up inside the barrel” of the first rifle that was fired, the authors write. This happened repeatedly with different rifles.

They couldn’t figure out what was causing this major malfunction until an unnamed engineer took a close look at the copper used to make the bullet cases.

“It turned out,” the authors write, “that rats had infested the warehouse where the copper was stored and that rat urine weakened the copper, making the entire batch of bullets defective.”

A recent example was the Stuxnet worm used to “infect” the computer program Iranian engineers were using to manufacture centrifuges that would lead to enriched plutonium for nuclear weapons. Israeli leaders saw Iran’s nuclear weapons effort as one of those existential threats that has arisen over the years.

“For both countries, the idea was new, and its chances of success were unknown,” Katz and Bohbot write. “Nevertheless, it was extremely attractive. A cyber weapon would leave no fingerprints, would be untraceable and, most importantly, not require fighter jets to fly from Israel or the U.S. to bomb Iran. On the other hand, the attack would have to be as devastating as a missile strike.”

The plan worked. The U.S. Central Intelligence Agency turned to Israel to find a way to transfer the Stuxnet worm to a computer that would be hooked up to the Iranian computers. This story was thoroughly covered in The New York Times and other papers at the time, without the acknowledgement by either Washington or Jerusalem.

“Essentially, Stuxnet caused the engines in Iran’s centrifuges to increase and decrease their speed, just enough so they would eventually break,” the authors write.

And so it has gone over the decades. From fighter jets and the nuclear energy and weapons program to the Merkava tank and drones, Israelis have figured out ways to stay ahead of the survival game by developing weapons to give them that “strong qualitative edge” Ben-Gurion called for.

On May 14, 1948, when the British lowered the Union Jack, had the neighboring Arab states peacefully accepted Israel into the family of Middle Eastern states, just maybe it would not have the military edge it has today. But that didn’t happen.

As many know, five Arab armies attacked the fledgling Jewish State. The result: Israeli leaders learned immediately they had to rely on their own wits if their new state was to survive.

Israel has become one of the world’s leading developers and adapters of high-tech weapons systems, which it deploys to protect the Jews and Arabs who live within its borders and the West Bank areas it controls.

The well plugged-in authors tell engaging stories about weapons and ingenuity. This is an excellent book for wonks but maybe not so much for the average reader.