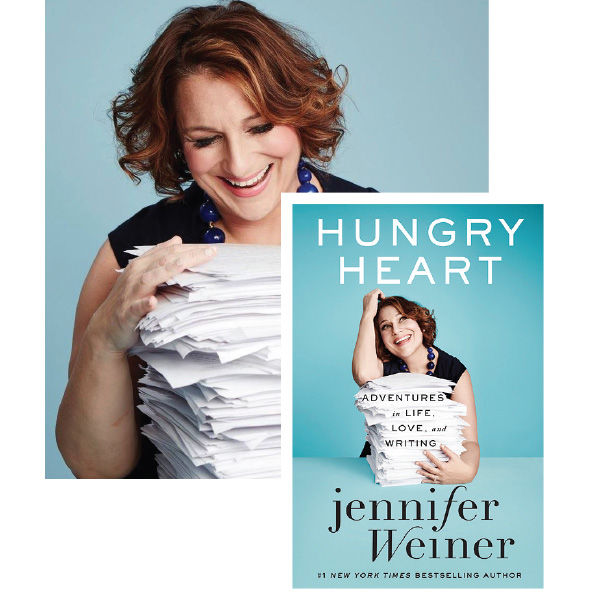 By Ellie Grossman, Special to the Jewish Light

In Jennifer Weiner’s new memoir “Hungry Heart,” this New York Times best-selling author is, well, an open book. She has spent more than five years on the Times best-seller list with more than 11 million copies of her books in print in 36 countries. Her memoir marks her first foray into nonfiction, and it is sure to satisfy and even surprise her readers.

An outspoken novelist, feminist, humorist, columnist, live tweeter, political activist and Jewish mom, Weiner will divulge her hilarious and heartbreaking stories at a Jewish Book Festival event Oct. 19.  On the heels of a whirlwind book tour in support of her first children’s novel, “The Littlest Bigfoot,” which will also be for sale at the book festival, Weiner had this to say in a recent interview:

“You fall down. You get hurt. You get back up again” reads the opening of “Hungry Heart” — this seems to be theme in your life. What is it about you that makes you a survivor and an inspiration to so many women?

I think, like many women, I am who I am because I didn’t have a choice. I had to help take care of my siblings after my dad left out of necessity. I felt compelled to speak out about sexism and inequality at Princeton and elsewhere because, for some reason, a desire for fairness is part of my hard-wiring. So is candor, which is why the whole world will soon be able to read all about my miscarriage.

And, as far as being an inspiration, I think what women see when they see me is someone who isn’t perfect, someone who’s still struggling, someone who makes mistakes and then tries to pick herself up and keep going and make different mistakes the next time.

In your memoir, what are readers going to be surprised most to find out about you?

After my publicist read this book, she called me and said, “Jen Weiner, which is what she calls me, I feel like I really know you.” And I said, “But you’ve known me for years!” It’s hard to say what’s going to surprise people. Certainly, learning the details of my father’s life and death were a huge surprise to me.

Do you see your books eventually bridging the gap between commercial and literary fiction?

I wish. But I think I’m going to be a little like Moses in that regard. Someday, I might see the Promised Land, but at this point I feel like I’ve been placed so firmly in the “frivolous and disposable” box that there’s no hope of ever climbing out. Unless I write under a pseudonym!

Do you feel like your success has longevity because you don’t rely on the critic’s approval but rather the relationship you have built with your fans?

I can point to any number of writers — ironically, many of them Oprah picks — who’ve had huge best-sellers, thanks to some outside force, whether it was a critic or a talk show, telling people “read this book.” Then, when they publish the follow-up, and there’s nobody issuing that directive, the book flops.

As much as it’s natural to hope and pray for that Oprah love, or the cover of the New York Times Sunday book review, I think that it’s much better to build a career from the ground up.

Why did you decide now is the time for a memoir? 

Initially, the plan was to publish a collection of pieces that had already been in print, plus a few of the stories I’ve told over and over. I turned in a draft and then thought it over, and realized that I was 45, which felt like kind of a midpoint. Here I am at the halfway mark, I thought. What have I learned? What stories can I tell that might help women feel less alone, more at home in their own skin and in the world?

I asked for the manuscript back and decided to write like no one would ever read it … and then, when it was clear that other people were, in fact, going to read it, I told myself that telling these stories might make other women feel less alone.

Throughout the book, you reference your Jewish upbringing. Your essay on Nanna’s gefilte fish is a classic. How has being Jewish, including the times you felt alienated by your own tribe as a teenager, influenced your writing?

Being Jewish means that you’ll always be an outsider — which is a real blessing for a writer. Outsiders are observers. We are always trying to figure out what’s going on with the insiders and how they got to be the way they are, and we can see situations from our own unique perspective. And I think that being Jewish has given my stories a richness and a specificity that resonates with Jewish readers, and which seems delightfully exotic to non-Jews.

How has Judaism influenced the way you are raising your daughters (Phoebe, 8, and Lucy 13)?

With my own children, I think a lot about privilege, and the obligation of tikkun olam. My ex and I have chosen to raise our girls in a city (Philadelphia), where they see inequity every time they step outside their door, and know, in a visceral rather than a theoretical way, how much work there is to be done. We volunteer, and we give to charities, and we talk a lot about what money is for, and the obligations that come with having enough of it.

Also, Passover is very special to me because, for years, my Nanna would make the gefilte fish, by herself, from scratch (and then put it in a cooler, and wrap the cooler in garbage bags and label them ‘FISH’ when she checked them at the airport). Then she started making it with me and my mother, and my daughters … and it puts me in mind of all the traditions that are passed down from generation to generation.

What does “Hungry Heart” mean to you?

“Hungry Heart” means that we’ll always want something — food, love, success, respect, attention. Like I say, yearning is the human condition, and what drove us to develop fire, and the wheel, and Instagram. What does it mean to me? That I’ll always want, and that maybe I’ll never feel as if there’s a finish line, and I’ve crossed it, and that it’s going to be the work of the next half of my life to tell myself that I actually am doing what I’m supposed to do, and have gotten where I’m supposed to be.

Would you say the fictional world you create reflects your real life today?

I think there is some magic to writing your own happy ending, to imagining it in all of its specific glory, and writing it down, and putting it out into the universe. I got my happy ending — even at my size, and even with all of the sorrow and mishegas that came with it — and I hope that my example means that other women can, too.