#WomenOfTheWall Practicing Judaism The Way We Want To 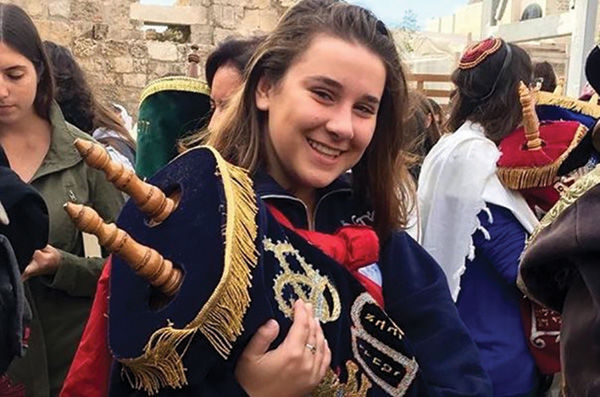 Waking up the morning of Nov. 2, I had absolutely no idea that I would take part in history. At 5:30 a.m., my roommates and I rolled out of bed, and by 8, I was doing a Hakafah, holding and dancing with one of 14 of the Torah scrolls that were brought into the women’s section at the Kotel by a parade of pluralist rabbis, including Union for Reform Judaism President Rabbi Rick Jacobs. This incredible morning actually started off a bit strange after EIE arrived at the Old City. A woman who appeared to be Orthodox with a baby wrapped in a scarf on her chest started to approach the front of our group.

Due to the controversy of the event, most of us assumed that she would come up to us and yell at us for participating in the Rosh Chodesh service. Instead, this woman asked who we are with, and we responded that we were with the Reform movement. She smiled and then asked us if it looked like she was carrying a baby. We tell her that it does, and she pulled the scarf aside to reveal a Torah scroll.

Once past security, we were immediately faced with a bit of a riot taking place on the plaza by the entrance. The pluralist rabbis had taken Torah scrolls through security at the other gate, and they were being pushed and shoved by the wall security, who were actually just a collection of 20 people hired by the government because the police were ordered not to interfere with any of the actions of the day. The men and women holding Torah scrolls began breaking through the mess of people, and fought their way into the women’s section while being grabbed at by various Hasidic people, shouted at by little boys and pushed back by the security.

One by one, scroll by scroll, rabbis, HUC students and various members of Women of the Wall burrowed through the crowd and were met with cheers as they brought the scrolls in. Among the students who were holding Torah scrolls was one of my old unit heads from Goldman Union Camp Institute, helping to bring in a Torah. I consider her a role model. Seeing her fighting for what Reform Jews believe in filled me with pride and made me admire her even more.

Once the prayer service for Rosh Chodesh began, I was filled with a sense of sisterhood and community. Even though I had trouble understanding where we were in the service at some points (Hebrew is a hard language!) no matter what was going on, somebody helped me find the correct line, page or just took my hands and danced with me.

Torahs were being passed around yad l’yad, from hand to hand, and the level of connectedness that I felt to these women that I had just met was unreal.

These women fight every month for equal rights and the ability to practice Judaism the way that they want to, and I was now a part of their struggle. Our struggle. Hearing the words of the shema at the Kotel with a Sefer Torah was a very spiritual moment for me, and our struggles came to fruition. Being passed one of 14 scrolls while hearing the voices of the Women of the Wall, the whistles being blown by Hasidic boys who really didn’t know any better and wearing the tallit passed to me by my old camp counselor was even better.

In that moment, I was proud to be a Jew, I was proud to have partaken within the struggle, and I felt the hope of 5,000 years. Dancing with the Torah, bringing it around our circle of community and seeing the emotions in the eyes of our Kehilah Kedosha filled with the old, young, Reform, Conservative, Orthodox and everything in between, I could think of nothing but the last sentence of the Hatikvah, “L’hiyot am chofshi, b’artzeinu, eretz-tzion, v’yerushalayim.” To be a free nation in our land, land of Zion and Jerusalem. In that moment, Israel was as it should be, my home where I felt comfortable practicing Judaism the way that I feel most connected.