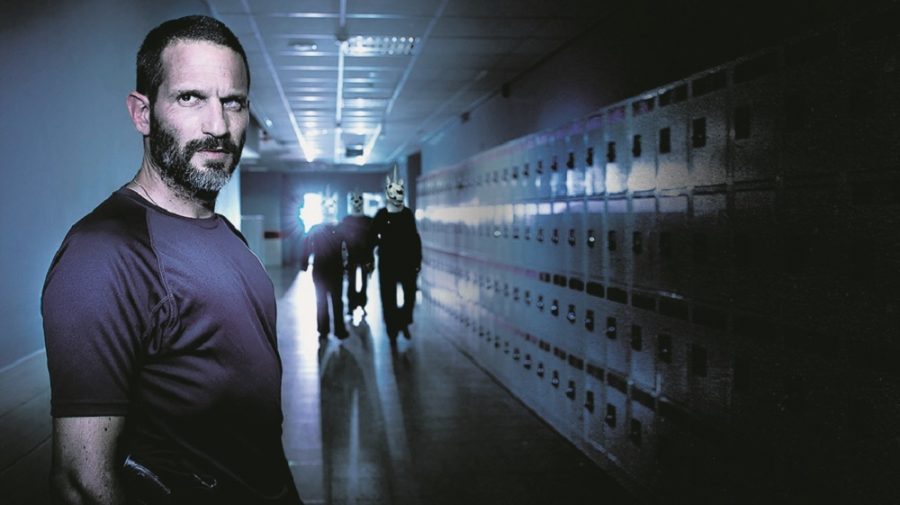 Ever since two shooters walked into Columbine High School in Colorado 20-plus years ago, the world has walked on eggshells during kid drop-off each day. What was once startlingly uncommon has become more common these days, and the entertainment industry is starting to cover some ground on this very subject. Now, Israeli enters the fray with its new television series, “Black Space,” which hits Netflix on May 27.

Starring the ever-reliable Guri Alfi (from “Anachnu BaMapa” and “The Chef”) as Rami Davidi, the investigator of a school shooting at an Israeli school on Yom HaZikaron – a.k.a. Memorial Day — who notices there’s more to the shooting than just one person wreaking havoc. With all the students wearing special white unicorn masks and a lead involving a group of janitors on top of the roof, Davidi senses something much deeper than a mere act of violence. You could say the same about the producers and writers of the show, taking the familiar and shining their point of view through it.

Tapping into the political powers and social dynamic of such an event in a country that’s not exactly used to it, creators Anat Gafni and Sahar Shavit break new ground by attaching their attention to the actual students. Instead of centering the tale solely around the perpetrator and the authorities, they examine the dichotomy among the students, especially their activity and usage of a new social media app, which takes the show’s name: “Black Space.”

You’d have to be blind in order to miss the global effect of these apps on everyday life and any kind of distressful event that takes place. How do we find out about protests, crime, or the latest happenings in the unfortunate events taking place in Gaza? Social media, Google, and the internet, of course. Gafni and Shavit provide the paranoia and agony of a school shooting but like few other shows, they wish to tackle the “why” in it all. Without beating viewers over the head with it, you’ll view the hour-by-hour and day-by-day moments through a prism of cultural unrest.

Seeing this on an Israeli show is oddly hopeful because part of the issue with recognizing world problems is a narrow-minded viewpoint. By yanking the camera from its usual position — America hasn’t fared too well in this risky genre just yet — to Israel and exploring the twists in morality and societal themes there, a whole new avenue of possibilities opens up.

As Lior Zaltzman wrote for Kveller, this isn’t your normal piece of Israeli entertainment. It’s something more hard-hitting and relevant than expected and with all the unrest taking place in Israel currently, “Black Space” may not transport your attention entirely, but it will engage the mind and present something different than the usual Netflix selection.

Outside of Alfi, the cast features Yoav Rotman (Hanina, from “Shtisel”) and Assi Cohen as an older cop who sees Davidi’s theories about the shooting but can’t break off from his own investigative methods. The students are played by an eclectic gathering of young actors who should leave an impression.

Plenty of shows and movies have stuck their head in the “white noise” door, going for easy horror thrills and a quick jump from a viewer. “Black Space” wants to unveil something more sinister and long-lasting: the fragile, young human mind. What is it capable of, and how wide does that terror stretch?

See for yourself on May 27.