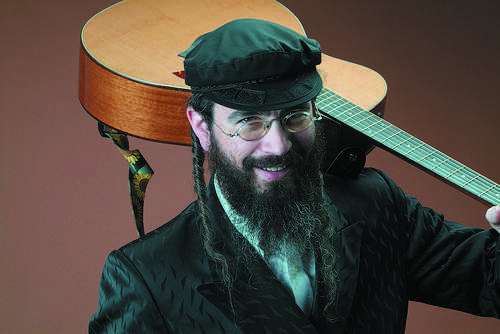 Many are aware of the “Protocols of the Elders of Zion,” the anti-Semitic work that has plagued the Jewish community for more than a century with lies about Judaic desire for world domination.

Yet few would have thought of writing a song about it.

And that’s just what Rav Shmuel did, lampooning the infamous forgery with a song called “Protocols,” which has since been viewed more than 150,000 times on YouTube.

St. Louisans will get a taste of Rav Shmuel’s musical talents on Thursday, April 7 when he comes to the JCC’s Staenberg Complex as part of the Aish Speakers Series. The 7 p.m. event, the Stuart I. Raskas Dessert Reception entitled “Jews, Music and Humor: Getting the Message, Gaining Inspiration,” has an $18 suggested donation.

David, who has known Rav Shmuel for almost 25 years, said that he is both an inspirational and dynamic personality.

“There is a tremendous amount of humor in his songs and his speaking that help bring home the message as well,” he said. “He is a very charismatic personality who is ready to roll up his sleeves and help people out at the same time, not just sitting on a soap box.”

Laughs may be an effective tool for conveying the message but Rav Shmuel himself seems to feel it comes more naturally than as part of a plan.

“Humor for me has been an interesting experience,” he said. “I have a number of lyrics in my songs and stories that I tell that always get laughs although every time it happens it’s quite surprising to me. I don’t see myself as a comedian but I do have the ability to not take myself so seriously and when I’m laughing at myself and end up involved in something really bizarre, I’m sharing the experience so the audience laughs with me. I think that’s where it comes from.”

That’s part of the storytelling aspect to Rav Shmuel’s work. Not that it’s his day job. He actually runs a yeshiva in New Jersey though he’s been songwriting since the early 1970s, often hanging out in Greenwich Village pubs and bars to perform, continuing a tradition the New York native started while living in Israel.

“It’s not a full-time thing,” he said of his entertainment career. “It’s sort of a passionate hobby I do on the side but it’s been received very well so I’ve been pursuing it.”

But in a sense his job as an educator blends into his time on stage. He incorporates texts and Jewish wisdom into his shows.

“If there has to be a topic heading it would basically be the relevance of Judaism and traditional sources to the modern world,” he said.

Rav Shmuel said that his performance on April 7 will be more than just music. He will alternate songs with speech, pausing to talk and share his ideas.

“I’m going to be basically weaving my songs into the talk,” he said. “It’s just going to flow from one to the other.”

He said he hopes the audience feels enriched by the evening.

“It will also be an enjoyable experience, some good music and an appreciation and knowledge that sometimes people aren’t aware that in the religious community people are also being artistic,” he said. “That can sometimes be an eye-opener as well.”

HOW MUCH: $18 suggested donation