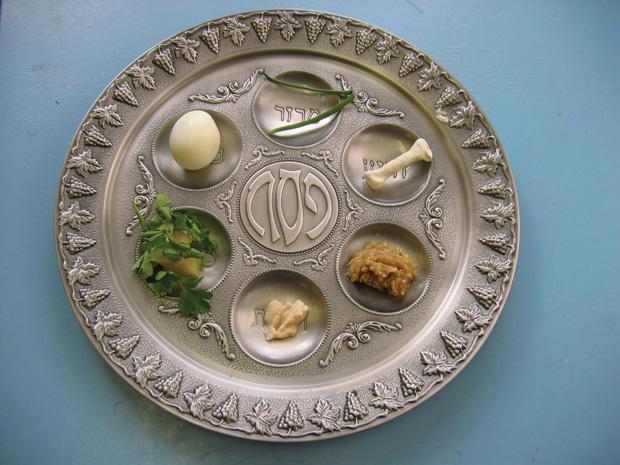 By Margi Lenga Kahn, Special to the Jewish Light

Passover is brimming with symbols: the four glasses of wine and the seven foods displayed on the seder plate, karpas (a spring green), maror (bitter herbs), charoset (sweet fruit mixture), zeroah (horseradish root), baytzah (roasted egg), and the three matzot (representing the three tribes of Israel). While these symbols are on every seder table around the world, the actual  meal varies by geography and from family to family.

In the United States, most seder menus are anchored in the Ashkenazi traditions brought here by the Jews who emigratred from Europe beginning in the mid-1800’s. matzah ball soup, gefilte fish, kugel and dried fruit compote are some of the same dishes that graced the seder tables of our European ancestors.

I’m not here to shatter these rich Ashkenazi traditions. Rather, I’m here to suggest tweaking some of those Passover staples to appeal to the tastes of our children and, at least for me, our grandchildren.  Your first reaction may be to push back and respond, “We did just fine with those foods. Why can’t our children and their children do the same?” My response in two words: gefilte fish.

Now, I happen to love gefilte fish, and in particular my mother’s Polish style sweet gefilte fish: cold patties of ground fish mixed with onions, eggs, matzah meal and spices, cooked in fish broth made from fish carcasses and served bathed in a gelatinous fish stock.  But I realize gefilte fish may not be universally loved.

And I understand that an appreciation of gefilte fish must be cultivated. We discovered that when we offered our daughter Hanna, at the age of 6 months, a taste at her first seder.  It was her first solid food, and she was the picture of enthusiasm until that little piece of gefilte fish hit her palate. Oy. We worried she’d never try solid food again.

That happened 34 years ago and we all still laugh about it. However, now that I have grandchildren, I’d like to fill their first seder at our home with happy memories. Among other ideas, I plan to assemble small bags filled with kid-friendly plague symbols and to create a puzzle or matching game to impress upon them the value of freedom for all. We’ll do lots of singing and, perhaps, some role-playing. Not too difficult, right?

Playing with food tradition, however, is a different story, and I’ve come up with some fun variations on those traditions that I hope will appeal to the youngest members at our seder table. Maybe some of these will appeal to your family as well.

First, the fish course. I refuse to part with our family’s tradition of beginning a seder meal with fish (I’ll save my gefilte fish for later in the week).  While I wouldn’t think of serving frozen fish sticks at our seder, I’ll hope that my fish cakes, made from a mixture of finely chopped fish seasoned with cumin and fresh herbs, rolled in matzah meal and fried until crisp (think mock crab cakes), will be just as popular.  To accompany the fish cakes, I will offer a catsup dip for the kids and a garlic-tahini sauce for the adults.

Nearly everyone enjoys matzah ball soup, young and old alike. Rather than making tennis ball-size matzah balls, which can be a challenge to cut without splashing soup all over, I’ll form the batter into smaller balls using the small end of a melon baller. If small enough, I’ll plan to serve 10 balls in each bowl (equal to the number of plagues). Or if 10 is too many, four (for the four questions).

You could easily alter a standard matzah kugel recipe by substituting kid-friendly ingredients such as shredded carrots and apples for some or all of the matzah farfel. By including raisins and a couple of tablespoons of almond butter in the mixture, this kugel just might become a new family favorite.

And as an alternative to kugel, consider quinoa cakes.  Made from the seeds of a grain recently approved for Passover, quinoa cakes are high in protein, gluten-free and add some much-needed fiber to a meal in need of roughage. The cakes can be baked or fried, and served plain or with a finely chopped cucumber, green onion, dill and yogurt sauce.

If brisket is on your menu, the kids might warm up to brisket sliders: tender shredded brisket, piled high on Passover minirolls. Offering toppings such as crispy fried onions and arugula might even entice the adults at your seder table.

Fruit is a great way to end your seder meal. The traditional brownish compote may not appeal to the little ones (and perhaps some of the big ones). Fruit pies, however, appeal to all. While I suppose it is possible, at least in theory, to make a delectable pie crust out of matzah cake meal, a simpler, healthy and delicious option for your seder gathering is a fruit and berry crisp.

I am sure we can each come up with other creative ways to tweak our traditional seder menus.

Here are some Passover recipes to get you started.