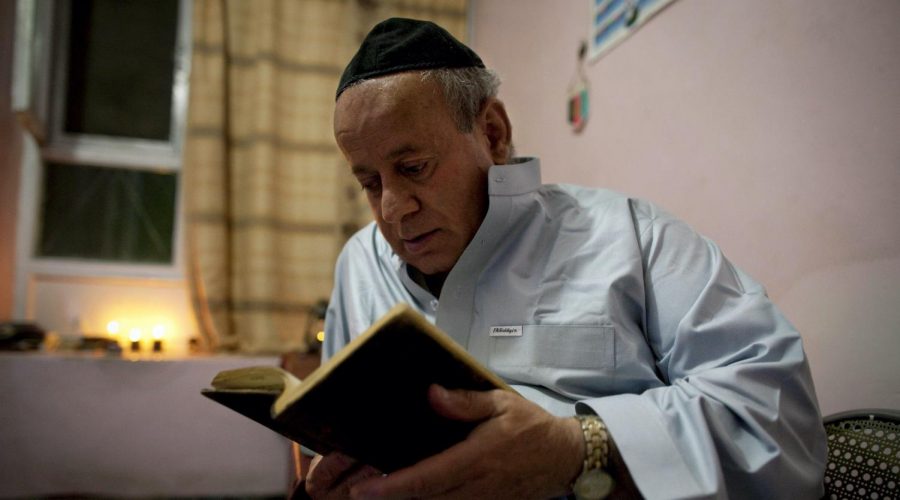 KABUL, AFGHANISTAN - SEPTEMBER 18: Zebulon Simantov reads his old tatered hebrew prayer book as he celebrates the Jewish New Year feast of Rosh Hashanah September 18, 2009 in Kabul, Afghanistan. Zebulon, 57, claims to be the last Jew living in the war-torn conservative Muslim country and says he keeps a Kosher home. The Jewish New Year, or Rosh Hashanah, coincides this year with Eid al-Fitr, a Muslim feast marking the end of the fasting month of Ramadan. Born in northwestern Herat, Simantov attended Hebrew school before moving to Kabul at age 27. In 1992, he fled to Tajikistan, fleeing from Afghanistan's growing violence, married a Tajik Jew and had two daughters. The family immigrated in 1998 to Israel, but he returned to Kabul two months later, leaving them behind. (Photo by Paula Bronstein/Getty Images)

Mark D. Zimmerman, SPECIAL FOR THE JEWISH LIGHT
With the imminent final withdrawal of American troops from Afghanistan, the Taliban is quickly taking control of the country. The Jewish history of Afghanistan goes back at least to the 7th century, with some claiming that Afghani Jews were descendants of the so-called lost tribes of Israel.

Jewish life eventually settled primarily in the community of Herat, though there was a Jewish quarter in Kabul in the 12th century. Most Afghani Jews fled the country in the 1900’s because of an oppressive regime that had forced them into ghetto-like conditions, where they were subjected to riots, rape, and forced conversion.

Most emigrated to the United States and Palestine (and after 1948 to Israel).

Which of the following is true about the Afghani Jewish population? A. Dost Mohammed Khan was the founder of the Barakzai dynasty in Kabul in the early 19th century, gaining the title Emir of Afghanistan in 1823. Unlike many earlier leaders of Afghanistan, Khan was relatively accepting of the Jewish community, and in fact, a Jewish merchant, Yacob Nasirov, was appointed Chief Minister by Khan in 1832.B. While there is much speculation that Noah’s ark came to rest on Mt. Ararat in western Turkey, there is an opposing view that has long been held by Afghani Jews, that Noah’s ark came to rest on the Sakar Sak peak in the Hindu Kush mountain range of western Afghanistan. While no archaeological evidence has been found to support this theory, it is known that early Jewish merchants traveled across this range on the Silk Road trading route between China and the Mediterranean region, dating to the period of the Temple in Jerusalem.C. In addition to the Jewish community in Afghanistan, up until the early 20th century there was also a small group of Pashtuns known as the ibn Yirmiyahu who claimed a connection to the lost tribes that supposedly settled in Afghanistan in Biblical times. While they were practicing Sunni Muslims like most Pashtuns, they maintained a number of Jewish customs including the lighting of candles on Friday nights and the performance of circumcision on male children at 8 days, unlike other Muslim communities who do circumcise, but at a later time. Eventually, in particular because of the anti-Semitic policies of Afghani leaders, most members of the ibn Yirmiyahu community abandoned their Jewish customs, though a small number did move to Palestine where they eventually converted to Judaism.D. Only one Jew currently remains in Afghanistan, Zabulon Simentov, who has been the caretaker of a delapidated synagogue in Kabul for many years, though his wife and children emigrated to Israel in the 1990’s. He recently announced that he plans to leave for Israel prior to the Taliban takeover of the country.E. The second-to-last Jew in Afghanistan was Ishaq Levin. He lived in the opposite end of the same synagogue where Zabulon Simentov lived. In stereotypical Jewish fashion, the two could not get along. They prayed in separate parts of the building, and neighbors complained that they heard them yelling at each other all night.
Click here For The Correct Answer