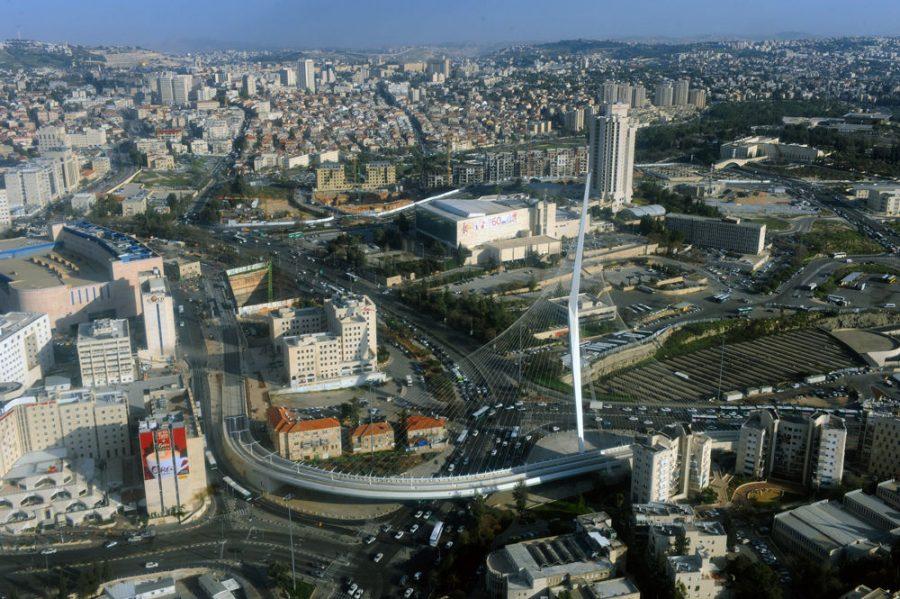 Provided by the Center for Israel Education

Jerusalem holds a $500,000 extravaganza to inaugurate the Chords Bridge, also known as the Bridge of Strings, to serve pedestrians and the new light-rail system at the entrance to the city. Its designer, Santiago Calatrava, has built more than 40 bridges around the world, including a pedestrian bridge in Petah Tikva, but says this is his favorite. The 1,180-foot-long bridge features 66 white steel cables hanging from a 384-foot spire.

Musician Naomi Shemer, best known for writing the song “Jerusalem of Gold,” dies at age 73 after a long battle with cancer. Born on a kibbutz by the Sea of Galilee, she served with the IDF’s Nahal entertainment unit and studied music at the Rubin Academy. She wrote “Jerusalem of Gold” for a festival in 1967. After the Six-Day War, the Israeli public treated the recording by Shuli Natan as the anthem of the city’s reunification.

Ami Ayalon, who leads the Shin Bet security service and Israel’s navy, is born in Tiberias. He earns the Medal of Valor, Israel’s highest military decoration, for helping capture Egypt’s Green Island as a naval commando despite being wounded several times. He commands the navy from 1992 to 1996, when he is put in charge of the Shin Bet. He retires in 2000. He represents Labor in the Knesset from 2006 to 2009.

Israel publishes the Jerusalem Declaration, announcing the official reunification of the city under Israeli sovereignty after the Six-Day War. Jordan lost control of the eastern part of the city and the West Bank after attacking Israel and bombarding Jerusalem on June 5. Jordan had denied access to the city’s holy sites to Jews and Israeli Arabs. By contrast, Israeli Prime Minister Levi Eshkol promises access to people of all faiths.

The British military launches Operation Agatha, a two-week series of raids against Jewish resistance fighters, on a day that comes to be known as Black Sabbath. Involving 17,000 soldiers, the operation seizes weapons and arrests 2,700 Jews, including future Prime Minister Moshe Sharett, most of whom are held at a special camp at Rafiah. Captured documents expose the cooperation among Jewish resistance movements.

German, Polish and Russian Jews establish Kibbutz Tirat Zvi in the Beit She’an Valley as one of the first religious kibbutzim. It is just west of the Jordan River and north of what becomes the Jordanian-controlled West Bank. Its name honors Rabbi Zvi Hirsch Kalischer, a 19th century Zionist leader. The kibbutz is part of the “Tower and Stockade” movement, an effort to expand the borders of a future Jewish state.

Frederick II, the duke of Austria since 1230, issues a charter extending rights to Jews as a way to boost Austria’s economy. The charter encourages Jewish money lending and Jewish immigration to an outlying area and guarantees protection to Jews. Frederick is the first European ruler to claim Jews as his subjects, and his charter serves as a model for such documents across the continent. It remains in effect until Austria expels its Jews in 1420.