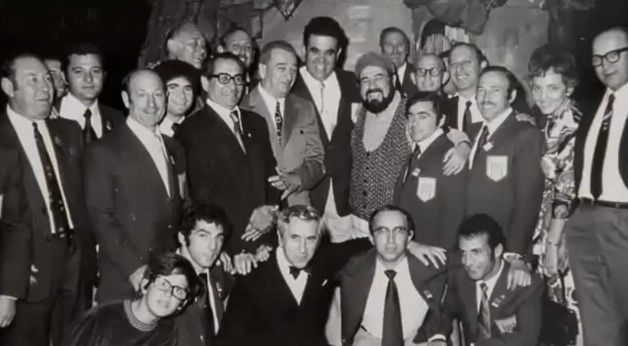 The Israeli Olympic team poses with the cast of a Munich performance of “Fiddler on the Roof” on Sept. 4, 1972, hours before the Sept. 5 attack by Black September.

Provided by the Center for Israel Education

Aug. 30, 1944 — Harold MacMichael Ends Term in Palestine: Rattled by numerous attempts on his life and fearing for the safety of his family, Harold MacMichael resigns as Britain’s fifth high commissioner to Palestine after more than six years, a period of increasing restrictions on Jewish immigration.

Aug. 31, 1947 — Last Meeting for Special Panel on Palestine: The U.N. Special Committee on Palestine, formed four months earlier, meets for the final time. Its majority report, endorsed by eight of the 11 nations on the panel, calls for Palestine’s partition into two states with an economic union. The minority report, backed by Iran, India and Yugoslavia, calls for a federation of Jewish and Arab states.

Sept. 1, 1915 — Weizmann Joins British Admiralty: Chaim Weizmann, who is credited with playing a key diplomatic role in the issuance of the Balfour Declaration more than two years later, is appointed as an honorary technical adviser to the British Admiralty on the supply of acetone, an important ingredient in the manufacture of the military explosive cordite. Weizmann, a chemist in Manchester, England, has developed an improved process for acetone production.

Sept. 2, 1935 — Rabbi Kook’s Funeral: An estimated 80,000 mourners, roughly a quarter of the Jewish population of the Land of Israel, line the streets of Jerusalem for the funeral of Rabbi Abraham Isaac Kook, who died of cancer the previous day. Rabbi Kook, who made aliyah in 1904, was appointed the British Mandate’s first Ashkenazi chief rabbi in 1921.

Sept. 3, 2011 — March of the Million Held: More than 450,000 Israelis take to city streets around the country in what is billed as the March of the Million, part of a summer of social justice demonstrations focused on affordable housing and relief from the high cost of living.

Sept. 5, 1972 — Olympic Massacre in Munich:  Palestinian terrorists with Black September kill two Israeli Olympic team members and take nine others hostage during the Summer Games in Munich. The nine hostages and five of the eight terrorists are killed during a German rescue attempt at the Munich airport.