‘The Human Factor’ definitely gets you talking, and its timely power should hold you for days. 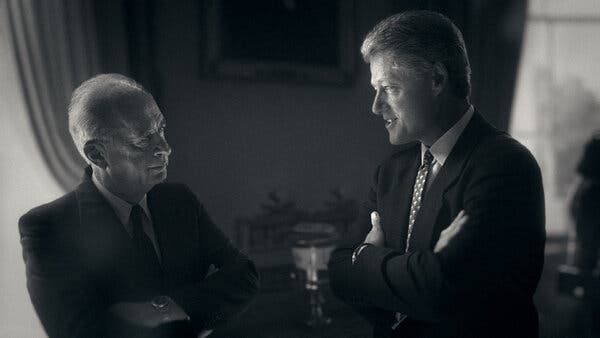 Here’s a scenario: You see two close friends fighting brutally and relentlessly. Before long, news travels and you find out it has been going on for decades or more. What do you do: get in the middle to find peace, stay away from the conflict, or try to find a way to work between the two facades that are bound to crumble?

“The Human Factor” is a fascinating account of the 30-plus year efforts of the United States to find peace in the Middle East between the Israelis and the Palestinians. Jews and Arabs going toe-to-toe over territory, history and all the violence that has consumed the two sides of a seemingly eternal conflict. By the end of the 106-minute documentary, I wanted to ask one question: What good is the future if you can’t come to terms with the past?

One of the biggest spotlights in Dror Moreh’s film falls over Bill Clinton’s time in the Oval Office and the good he tried to do. Good as in a peace treaty between Israel and its nearby neighbors who weren’t going to back down. The pinnacle moment came on Sept. 28, 1995, when Israeli Prime Minister Yitzhak Rabin and PLO leader Yasser Arafat shook hands and the fate of two vicious parts of the world started to soften.

But as the title suggests, tomorrow and the next day can happen to get in the way. Moreh already pocketed an Oscar nomination for “The Gatekeepers,” a similarly-toned documentary that put the sizzle in the director’s reel. This follow-up political history footprint painfully carried more anticlimactic aftershocks than satisfied souls, but isn’t that where this division of film is at its best? Finding the dirt in our collective histories, laying down in it and getting covered, and walking away with some kind of meaning. Moreh doesn’t pull a punch here, pulling accounts from the likes of former Clinton special Middle East coordinator Dennis Ross and Foreign Relations analyst, Martin Indyk.

Aaron Miller, another Middle East analyst who had the President’s ear back then, offers up the most thought-provoking idea that sums up the entire hopeful mess that this movie covers: “We saw the world the way we wanted it to be. We didn’t see it for what it is.”

Sometimes, a conflict can resemble the human element, or factor, of everyday life. All you have to do is take a look on social media or check a chat room to see vile, inhumane messages exchanged in public — and this is about a sports team. People are so resistant to change because it’s ingrained in their DNA to seek out the fragility of others and compare it to their own problems. Now, imagine a couple countries doing this and it’s not hard to understand how it all came apart, several times over.

What I didn’t expect from Moreh’s film is the emotional touch it carried. Here I am, a half-Lebanese writer talking about the United States acting as mediators in a legendary and resilient conflict between Jews and Arabs over territory and principle. The thrilling aspect of watching a documentary is finding a way for it to connect to your life and dig up some extra meaning. Again, a fascinating account of the absolute debacles. One of those times where a single decision could have changed the course of history.

“The Human Factor” spins the “what if” bottle expertly, dialing into the efforts of compassion, ever so ill-advised yet sincere, of the United States to separate its two friends from fighting any further. Like Mike Nichols’ “Charlie Wilson’s War,” this movie allows you to see both the potential victory of goodwill and its rugged limitations.

I am not sure if this is Academy Award-worthy just yet, but I highly recommend it. At the very least, a conversation will be started after leaving the theater. On the drive home, you will discuss the merits of each side and draw up your own preferred course of history. That’s taking something away from a thoughtful piece of commentary. Like the debate it centers around, that chat shouldn’t end for a long time.

“The Human Factor” definitely gets you talking, and its timely power should hold you for days.