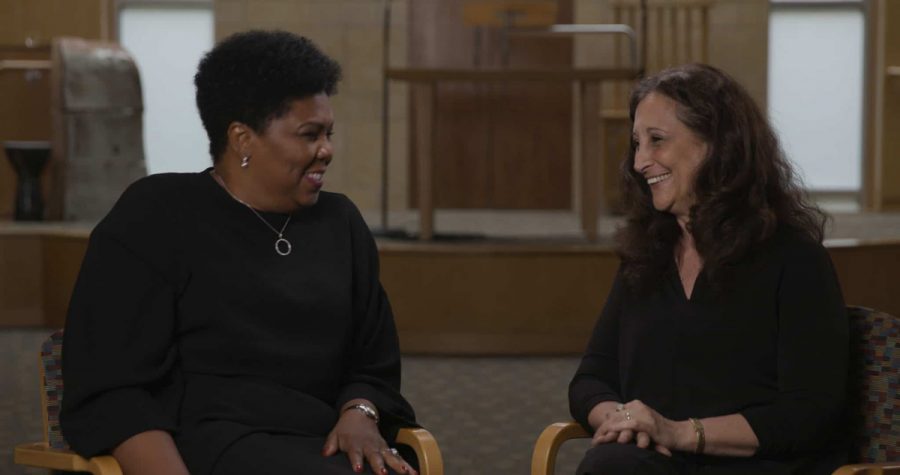 Rev. Traci Blackmon of Christ the King United Church of Christ in Florissant and Rabbi Susan Talve of Central Reform Congregation in St. Louis are featured in the documentary “Shared Legacies,” which is part of this year’s St. Louis Jewish Film Festival.

The Jewish Film Festival is a bit shorter this year, but it offers 12 outstanding dramas, documentaries and comedies from various countries. Some films have already appeared in St. Louis-area film festivals or theaters; others are local debuts.

The annual festival, which is held by the Jewish Community Center, is online and virtual this year because of the pandemic, so films can be viewed in any order. However, the festival program lists them in the order of the online, post-screening discussions.

The festival begins with the wonderful “Fiddler: Miracle of Miracles,” a documentary look at the creation of the beloved musical and how this particularly Jewish tale became an international cross-cultural phenomenon. The discussion is at 7 p.m. on Monday, Nov. 9, led by Mike Isaacson, Muny artistic director and executive producer.

“Crescendo,” set in Israel, is a German drama in Hebrew, Arabic and German about the power of music across boundaries and the formation of an Israeli-Palestinian youth orchestra. The post-film discussion will be at 7 p.m. on Tuesday, Nov. 10, led by Michael Ochs, creator of Pursuit of Harmony, an interfaith organization that promotes friendship between Jews and Palestinians through music.

Morris “Moe” Berg, a brilliant Jewish man who went from baseball player to spy during World War II, is the subject of director Aviva Kempner’s intriguing, surprising documentary “The Spy Behind Home Plate.” Kempner, who also directed the wonderful documentary on baseball star Hank Greenberg, will be featured in a post-film discussion at 7 p.m. on Wednesday, Nov. 11.

“Golda” is an in-depth documentary about Israel’s fourth prime minister, Golda Meir, and so far its only female prime minister. The documentary, which features interviews with people who worked with her, includes footage of Meir after an interview when she thought the camera was off and she speaks very candidly. A post-film discussion at 7 p.m. on Thursday, Nov. 12,  will be led by Anat Sultan-Dadon, consulate general of Israel to the Southeastern U.S.

“Holy Silence” takes a hard look at the Roman Catholic church’s response to the Shoah during WWII. Using historic footage and documents, director Steven Pressman examines the church’s shift in policy when Pope Pius XI, who denounced the growing anti-Semitism in 1938 Germany, was replaced by Pope Pius XII, who took a hands-off stance, and the implications of that for the Shoah. Pressman leads the post-film discussion at 2 p.m. on Friday Nov. 13.

The timely “Shared Legacies” examines the long partnership between Jews and African Americans in their fight for equality and inclusion, beginning with the founding of the NAACP and continuing to the present. This important documentary features the late Rep. John Lewis, D-Ga.; singer, actor and activist Harry Belafonte; Rabbi Susan Talve of Central Reform Congregation in St. Louis; and the Rev. Traci Blackmon of Christ the King United Church of Christ in Florissant. The post-film discussion will be led by Shari Rogers, the documentary’s director, writer and producer, at 7 p.m. on Sunday, Nov. 15.

Some films do not have discussions but do have much to offer.

“Incitement” is a searing Israeli historical thriller/drama based on the events that led to the 1993 assassination of Israeli Prime Minister Yitzhak Rabin by a young Israeli radical (see review above).

“Love in Suspenders” is an Israeli romantic comedy about an older woman and man who meet in a car accident, starring beloved Israeli comedy icon and famous prankster Yehuda Barkan. This was his final film before his death last month due to COVID-19.

“When Hitler Stole Pink Rabbit” is a German/Swiss feature film based on Judith Kerr’s semi-autobiographical, bestselling children’s novel, about a 9-year-old German Jewish girl and her family’s attempt to escape Hitler’s Germany.

“Paris Song” is a Kazakstan/Latvia/USA historical feature film  inspired by a true story about a Kazakhstani musician who meets George Gershwin and Irving Berlin in 1925 in Paris.

The late Oliver Sacks, the doctor and bestselling author of “The Man Who Mistook His Wife for a Hat” and “Awakenings,” is the subject of “Oliver Sacks: His Own Life.” The warm, biographical documentary is directed by Ric Burns, whose work includes collaborations with his older brother Ken Burns on documentary series such as “The Civil War.”