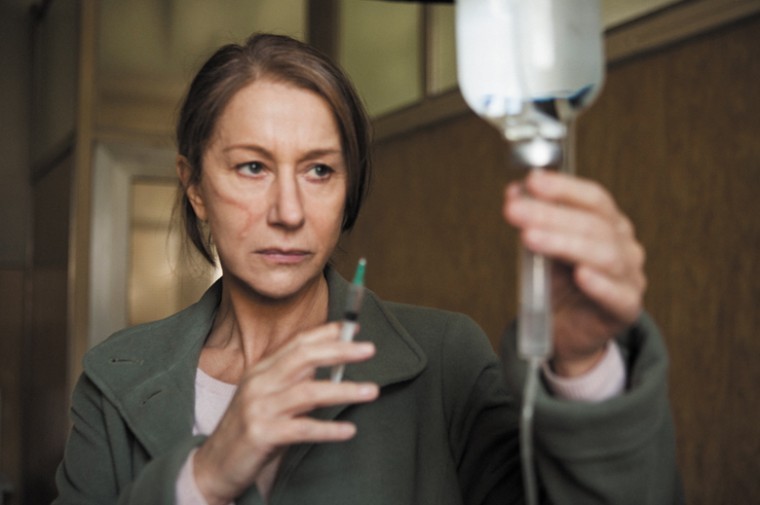 Three young Mossad agents return to a heroes’ welcome in 1965 Israel from their mission to capture a Nazi war criminal, the notorious “Surgeon of Birkenau.” But on that long ago mission they made a pact and, now middle-aged, Rachel Singer (Helen Mirrren) and her two fellow agents find the debt must be paid.

“The Debt” is a historical spy thriller about a long-ago secret mission by the still-new Mossad working for the young State of Israel. This English-language thriller is a remake of a 2007 Israeli film “Ha-Hov” (“The Debt”), a gripping psychological mystery/thriller, which played at the St. Louis Jewish Film Festival.

Re-making the story in English for a broader audience than the Hebrew-language original could reach, “The Debt” is directed by John Madden, who also helmed “Shakespeare In Love.” Madden stays fairly close to the original plot, though the tone of the new film is more of pure spy thriller rather than a mystery with psychological overtones.

The cast is top-notch. Helen Mirren stars as the now-retired agent Rachel who, in 1997, made a career by trading on her fame for the storied mission. Fellow agent Stephan Gold (Tom Wilkinson) has risen to the top of Mossad. Meanwhile, the third team member, David Peretz (Ciaran Hinds), has wandered the world, dabbling in various work, never fully recovering from their harrowing mission.

A rumor from a Russian hospital threatens to reveal old secrets and revive long-buried feelings. Although their days as field agents are long behind them, they must act.

The story takes place partially in flashback, when all three agents were very young. Jessica Chastain plays young Rachel, the junior member of the team and new to field assignments. The more experienced Stephan (Marton Csokas), an ambitious, talkative fellow in his late twenties, heads the mission, aided by serious and near-silent David (Sam Worthington).

Rachel and David pose as husband and wife for the mission while Stephan manages things behind the scenes from a dingy apartment they share. Romantic attractions entangle all three, complicating the team’s work.

They find their target in East Germany, practicing medicine under an assumed identity. Jesper Christensen plays Nazi doctor Dieter Vogel, sly and cunning as ever, posing as an ordinary German gynecologist.

Rachel sees him as a patient and finds something particularly creepy about her appointments with the doctor. The agents’ motives are personal as well as professional, as all three lost family in the Shoah.

The bigger stars and budget goose up the production in this remake. Not surprisingly, this version of “The Debt” is much more polished, with more extensive action scenes. An attempt to smuggle the Nazi out of Germany, which is fairly simple and low-key in the original, becomes a more complex, professionally orchestrated action at a train station, with plenty of twists and surprises.

The Israeli film is painted in more ambiguous tones, commenting on political myths. The characters are more boldly drawn but also more obviously flawed. The retired agents are barefaced in their concerns about tarnishing their legend and less fit to launch a new mission. The younger counterparts in the Israeli version are more plainly inexperienced, passionately patriotic but less polished at their craft. It gives the Israeli version an edge that the new one, more purely a thriller with more action, lacks.

One of the biggest changes is the doctor, a silver-tongued snake who constantly taunts his captors in the Israeli version. He is mostly silent in this remake, which seems to diminish his menace with the agents. While this newer version has more action, the original had more suspense and nuances.

Nevertheless, “The Debt” is still a good spy thriller with striking, memorable characters as well as a tale of political myth, vengeance and star-crossed love against a riveting historical backdrop.

Rated: R for some violence and language