The 3 most Jewish TV shows nominated for Golden Globes 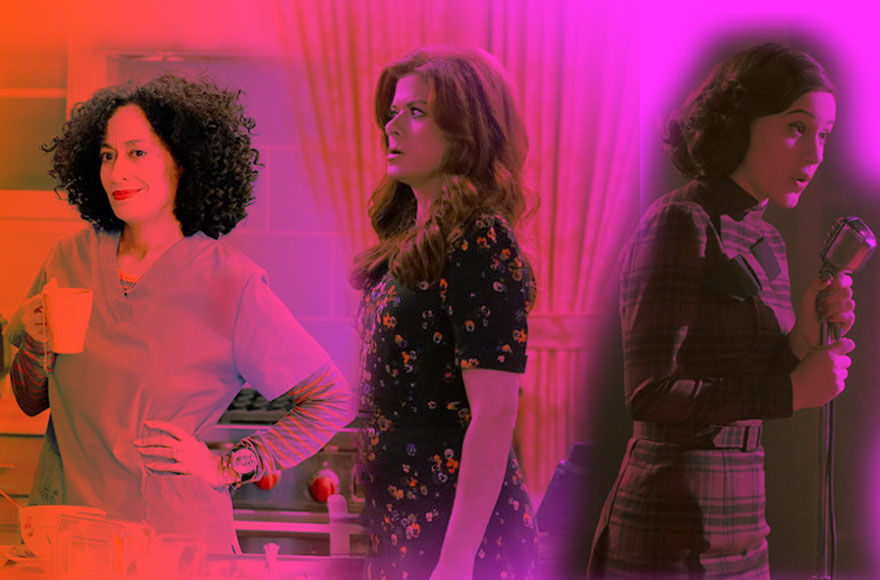 “black-ish,” “Will & Grace” and “The Marvelous Mrs. Maisel” are among the TV series nominated for this year’s Golden Globes. (JTA graphic/Lior Zaltzman)

Lior Zaltzman
(JTA) — It’s early January, which means the 2018 award season is upon us. The first big show is the Golden Globes, which airs Sunday night.

While we’re excited about the great Jewish actors and movies in the film categories (here’s looking at you “Call Me By Your Name”), three of the five TV shows nominated by the members of the Hollywood Foreign Press Association have something Jewish about them. Here are the Jewish and Jewy things about the shows nominated for best television series — musical or comedy.

“black-ish”: The popular and groundbreaking comedy about an African-American family doesn’t have much to do with Judaism, that’s true. But the family’s matriarch, a loving anesthesiologist, is played by Tracee Ellis Ross. The 45-year-old actor is the daughter of the one and only Diana Ross and of music executive Robert Ellis Silberstein, who as you might have guessed is Jewish. In fact, Ellis Ross’ first acting role back in 1996 was playing an African-American Jewish woman in the indie film “Far Harbor.” Ellis Ross won the Golden Globe last year for her role in “black-ish,” but this year, while her show is nominated, she wasn’t personally nominated in the best actress category. Here she is kvetching and kibitzing with Larry King about their love for Yiddish and how, while working on the show “Girlfriends,” they had to edit out some of her more Jewy speech affectations.

“Will & Grace”: The groundbreaking comedy, which helped popularize gay characters on mainstream TV, made a comeback recently after 11 years off the air. The show was created by two Jews: Max Mutchnik, a gay man who based the show on his relationship with his straight best friend, Janet, and David Kohan, the son of Jewish writers Buz and Rhea Kohan. Kohan also is the brother of Jenji Kohan, the creator of the shows “Weeds,” “Orange is the New Black” and, more recently, “GLOW” (Jewish actress Alison Brie is nominated for a Golden Globe for her performance in the show).

Another fabulous Jewish thing about “Will & Grace”? One of its two lead actors, Debra Messing, is, of course, a member of the tribe. Messing, during the 2017 GLAAD awards, implored Ivanka Trump to make sure the White House stands up for LGBTQ rights, addressing her “from one Jewish mother to another.” A longtime activist, Messing seamlessly reprised the role of Jewish interior designer Grace Adler, who moves back in with her gay best friend, Will Truman (played by Eric McCormack) following her divorce.

“The Marvelous Mrs. Maisel“: Once in a while there comes a show so Jewish that it’s easier to enumerate the non-Jewish things about it than it is the Jewish things. For example, the show’s star, Rachel Brosnahan, grew up surrounded by a very active Jewish community in Highland Park, Illinois, but her family is not Jewish.

Brosnahan’s character, Midge Maisel, is a Jewish housewife living in New York City in the late ’50s. When she finds out her husband, Joel, played by Jewish actor Michael Zegen, cheats on her with another woman, she discovers that she has a talent for standup comedy. The hilarious (and Jewish) Alex Bornstein also stars as Midge’s scrappy manager, Susie Meyerson. “The Marvelous Mrs. Maisel” is an homage to the iconic Jewish comedians of the 1950s and ’60s, including Lenny Bruce and Joan Rivers. The show, set in the unmistakably Jewish milieu of Upper West Side affluence, cigar-chomping garment executives and Greenwich Village cafe culture, brims with wonderful Jewish jokes.

Behind this refreshing comedy is a very cool Jewish lady: Amy Sherman-Palladino, who also created “The Gilmore Girls.” Sherman-Palladino’s father was Jewish, and she says she grew up “Jewish. Sort of.” Her Baptist mother refused to convert and she didn’t have a  bat mitzvah, but as she wrote for Vulture in 2013, she “found her inner Jew” after she listened to Carl Reiner and Mel Brooks for the first time.