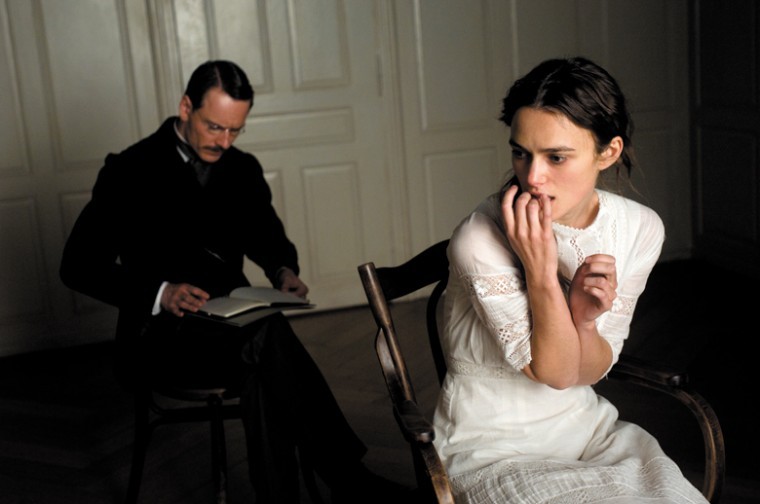 From left, Michael Fassbender as Carl Jung and Keira Knightley as Sabina Spielrein.

There is nothing dry or staid about this film, which features a raw depiction of mental illness and some steamy scenes of sadomasochism. “A Dangerous Method” is a passionate tale of ambition and deceit amid intellectual explorations and sexual deviations, but the film has a strong historical basis. Although it has Freud and Jung discussing their theories, the film is more about personal conflict and social views on the status of women, anti-Semitism and class divisions in pre-World War I Europe.

The film begins in 1904 at a Zurich hospital where 29-year-old Swiss doctor Carl Jung (Fassbender) is treating a challenging new patient, a beautiful but disturbed young woman named Sabina Spielrein (Knightley). The 18-year-old Spielrein is brilliant, Russian-born and Jewish but also violent and unpredictable. Jung decides to try out the new “talking cure,” as psychoanalysis is known, developed by Viennese neurologist Sigmund Freud (Mortensen) on this seemingly incurable patient.

As the doctors correspond and collaborate on her treatment, Freud, Jung and Spielrein form a kind of triangle. The patient responds so well to therapy, she is able to enroll in medical school. The doctors’ correspondence sparks a friendship with the wealthy, non-Jewish Jung traveling to Vienna to meet with his older mentor, the middle-class Jewish Freud, building on their personal and professional relationship.

The film is based on the play “The Talking Cure” by Christopher Hampton, who also wrote the screenplay (and the adaptation of “Atonement”). The story is based on real people and details of their personal relationships that came to light with the discovery of Spielrein’s diary and letters to Freud and Jung. Some of the film’s dialogue was taken directly from historical sources.

Director Cronenberg has a loyal following as an auteur known for skillfully made, intelligent, edgy films like “Crash” and “A History of Violence.” The director, who is himself Jewish, brings these historical figures to life, not just the more famous Freud and Jung, but the less-known Spielrein, who made her own important contributions to psychoanalysis before she perished in the Shoah.

The acting is brilliant, with Fassbender, Mortensen and Knightley all crafting unforgettable characters. Knightley gives a startling portrayal of mental illness in a fearless performance. Fassbender, a rising British actor who was in a slew of films recently, gives one of his best if restrained performances in this film. He maintains a cool and analytical facade as he and Mortensen engage in intellectual maneuverings.

The always-reliable Mortensen studied Freud’s personal mannerisms for added authenticity in the role. Although based on real people, there is nothing stiffly academic about them as the director maintains a tone of calm reserve above roiling waters for many scenes.

The look of the film is gorgeous, with Zurich and Vienna locales serving as backdrops for Jung’s hospital and Freud’s home. Overall, the photography, sets and costumes work in concert to bring an almost dreamy air to the story’s serious discussions and emotional fireworks.

As the film unfolds, its focus shifts from a discussion of early psychotherapy to a subtle examination of anti-Semitism, class divisions and the social status of women. Jung’s privileged background makes it difficult for him to grasp issues obvious to Freud. Class differences are brought to the fore in contrasting Jung’s elegant, coolly aristocratic Zurich mansion, with its manicured lawn and graceful sailboats, to Freud’s crowded, cramped middle-class home and office, with its cozy, familial atmosphere. Ultimately, Jung’s growing interest in mysticism and Freud’s rigid adherence to his views on sex, and their differing views on Jung’s relationship with Spielrein, help splinter their partnership.

“A Dangerous Method” is a powerful, well-acted film and well worth seeing.