Tattooing prisoners did not begin in WWII, but on the cult TV horror show, the parallels with Nazi torture are too obvious to ignore. 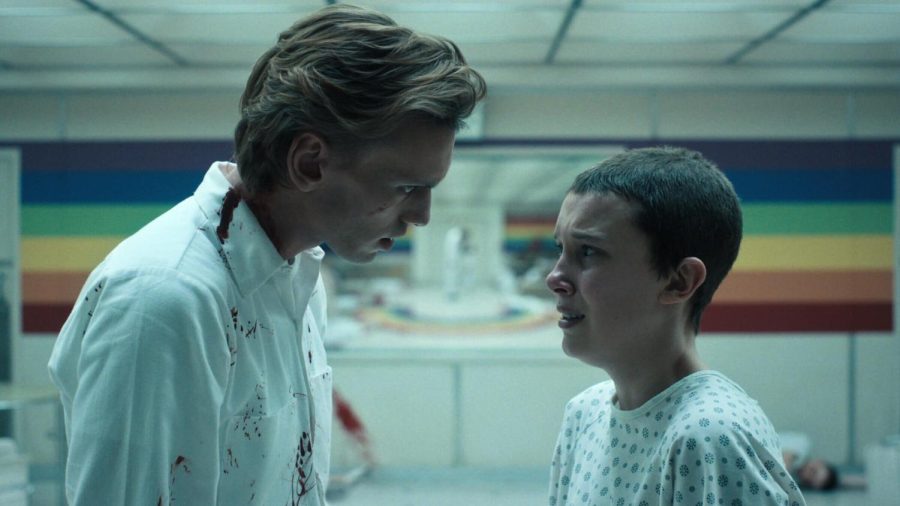 By Mira Fox, The Forward

When you think of numbers tattooed on wrists, you probably think of Auschwitz and Holocaust survivors with numbers inked on their forearms. But for some fans of “Stranger Things,” Netflix’s cult favorite horror show, they think of Hawkins, Indiana, and its superpowered heroine, Eleven. And they’re getting their own wrists tattooed with 011 in her honor.

“Stranger Things” has always played with Nazi themes; there are experiments performed on numbered children with shaved heads, held captive in a lab, evoking Dr. Mengele as much as MK Ultra. While the show’s creators, the Duffer Brothers, haven’t directly mentioned the Holocaust, the references seem obvious enough — and the pair draws heavily from directors such as Steven Spielberg.

But, apparently, the fans only picked up on the shallowest of meanings behind the tattoos — that it’s a special marking for children with superpowers — and decided to prove their fandom mettle by marking themselves in the same way. The show has even reposted these tattoos to its official Instagram account. And fans seem confused by those who have criticized the choice; numerous posts deny any similarity between the numbered wrist tattoos and the Auschwitz prisoner numbers tattooed on forearms.


“The tattoos look vastly different from the ones in the Holocaust, those were on top of the arm, with a different font, while the ones in ST [Stranger Things] are smaller, and go on the wrist. I just think people are trying to connect dots that aren’t there,” wrote one commenter on the “Stranger Things” subreddit.

“There is no connection to the Holocaust in the show so there isn’t any hidden meaning that could give them an argument,” said another Redditor. “Like what’s next, scream at a dude who has his granny’s death date on his arm because there are numbers in it?”

Admittedly, while the Holocaust is the most famous example of prisoner tattoos and numbers, it is certainly not the only one. In antiquity, tattoos, often with the name of the Roman emperor, were inked onto prisoners’ foreheads as a sign of punishment and dehumanization. And inmates have been assigned numbers to help track them for centuries, up to today.

And “Stranger Things” is not the first fictional work to recreate the practice. In “Les Miserables,” Jean Valjean is known by his prisoner number, 24601, and in “Squid Game,” the participants in a sadistic murder game are identified by the numbers on their uniforms.

But most fictional worlds avoid tattooing those identifiers on the forearms of their characters, probably to avoid the overt Holocaust association; “Stranger Things” has made no such effort. Changing the font or size of the numbers, or shifting their location by a matter of centimeters, is not sufficient to eradicate the relationship to concentration camps. (The Auschwitz numbers, which were tattooed by hand, also varied in size, writing style and placement.)

Fans unwilling to acknowledge the Holocaust resonance are paving the way for specious arguments — would a swastika not symbolize the Nazi regime if it was green? As antisemitism and white nationalism rise, will people deny the historical parallels because we’re American, not German, and the propaganda is spread using computers instead of physical posters?

Unfortunately, this mindset is becoming increasingly common; people argued that “Squid Game” was not a critique of capitalism because the show never mentioned the word, despite the fact that the show was about people playing a murder game for rich people’s entertainment because they had no other hope of survival. “Don’t Look Up” was one of the most heavy-handed movies I’ve ever seen, yet people missed its warning about climate change because it did not mention the term; critics even complained that its messaging was ineffective because it was too subtle, not because it was too didactic.

And though shows such as “Succession” and “Billions” depict the corrupting power of money, some critiques complain that the characters are too well-developed, too human, and therefore glorify the wealth the shows skewer; it feels worth pointing out that a show without character development would be unwatchable.

This mindset cheapens the force of art; if everything must be stated overtly, there’s no ability to play with concepts or subtlety. Stating a moral makes it pedantic and easy to ignore. The power to convince comes from showing, not telling — from requiring the audience to actually engage and think critically.

It’s perfectly worthwhile to discuss whether tattooing numbers on wrists is really fundamentally disrespectful to Holocaust survivors, and opinions vary; a small group of descendants of survivors have even gotten their ancestors’ numbers inked on their arms in their memory. Perhaps evoking the Auschwitz tattoo in a sci-fi show like “Stranger Things” weakens the power of the symbol, distancing it from its real history — or perhaps it keeps the memory of the Holocaust relevant and alive, giving people resonant metaphors to grasp onto as the actual event recedes into dry textbooks.

These are the kinds of questions we should engage with as part of preserving the memory of the Holocaust, and ensuring that “never again” is now. We need to be able to complicate ideas to relate them to our modern lives, and continue to apply the lessons of the past.

Get the 011 tattoo or don’t — it’s a free country. But when your tattoo is referencing a show that’s referencing the Holocaust, at least don’t deny the connection. It’s disrespectful to Jews, Holocaust survivors and the creators of “Stranger Things,” who created a nuanced story for fans to engage with.