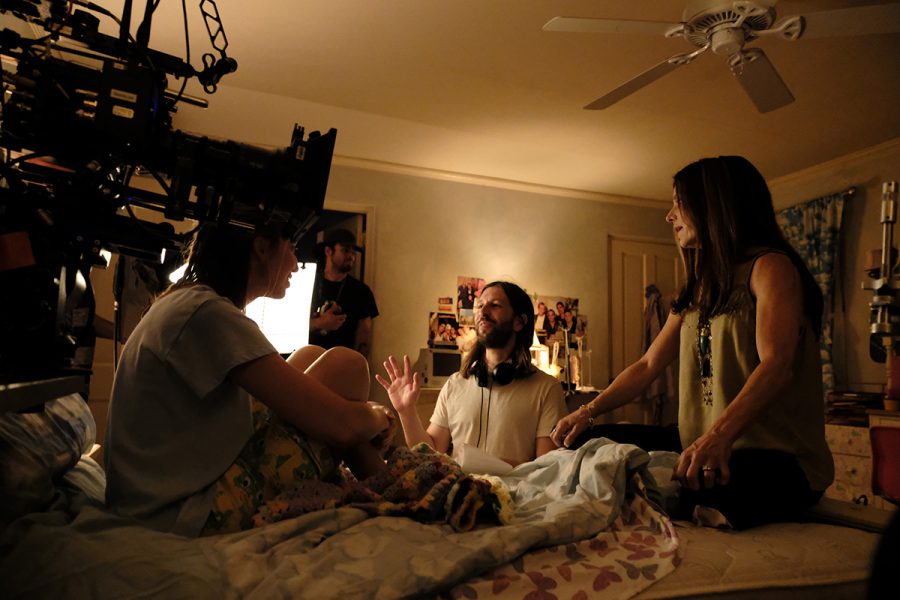 When Sam Zvibleman was a middle school student at Parkway Central in the 1990s, friends put up signs like, “Brant loves Alison,” or “Sam loves Michelle.”

The declarations were not genuine but rather from friends trying to make one another laugh. Alison wasn’t the girl who Brant actually had a crush on; she was someone the guy making the joke thought would be funny for Brant to love.

“Middle school for me and my friends was just busting each other’s [chops], making one another laugh, but you never thought about the consequences, you never thought about who you were affecting,” said Zvibleman, 36. “So if it says, ‘Sam loves Michelle,’ and Michelle was the least popular girl in school, you weren’t thinking, ‘Oh, I bet Michelle is super bummed.’”

Zvibleman has matured since those antics, and along with two women, wrote and co-created a show, “PEN15,” which streams on Hulu and is nominated for an Emmy Award for Outstanding Writing in a Comedy Series. The show, set in the year 2000, explores the comedy and pain of middle school, primarily from a female perspective.

Creating the show allowed Zvibleman to consider how such a joke “is affecting the girl who is going through the other side of that, who is the butt of the joke for the boys.”

“She is a real person; she has real feelings,” he continued, “so it was definitely a great opportunity to look at who I was from a more mature angle.”

Zvibleman, who is Jewish, is the great-grandson of Sam Zvibleman, better known as Sam, the Watermelon Man, a local legend and owner of a stand where he sold the fruit to Bob Hope.

Hope and Zvibleman first connected because the comedian stopped by the stand after hitting golf balls at a driving range while he was in town for shows at the Fox Theatre. Hope said to the Watermelon Man, “It’s so hot, I wish I had some of this at the theater.”

Zvibleman promised that he would deliver the fruit to the venue, and the two developed a decades-long friendship.

The Jewish Light reported: “Sam the Watermelon Man brought this to me,” the comedian told his audience between gulps. “He’s got the greatest stuff you ever bit into.”

Zvibleman is named for the gregarious vendor, but his family otherwise did not have any connections to show business, he said. Still, his parents and grandmothers were talented writers. He had a knack for it, too, and decided to pursue journalism at the University of Southern California. Aware of the school’s renowned film program, he decided to take a class in that department and was “immediately hooked by film.”

“I had like five movies growing up; we had a VHS of ‘Ghost’ and ‘Fiddler on the Roof,’ and I watched Chris Farley movies with my brother, but as far as film knowledge, I had zero,” he said.

Through others in the film industry, Zvibleman became best friends with his “PEN15” co-writers, Maya Erskine and Anna Konkle, about eight years ago. They asked if he wanted to do a TV show with them.

“They had some ideas — one of which was them playing young girls escaping from a cult, and we tried that out for a little bit, and then sort of my contribution was saying, ‘Well, do we need all this plot stuff about the cult, or could we just have you playing 13-year-old girls?”

In reality, Erskine and Konkle are both 32 years old.

But on “PEN15,” with teeth incarcerated by braces and engaged in discussion about a bra strap hanging over the shoulder in order to catch a boy’s attention, the two women are funny and awkward — not because they are unsuccessful in appearing like they are in seventh grade— but rather because they succeed.

The creators decided to have Erskine and Konkle star in the show for more than just comedic reasons. It also allows them to explore territory — like sexuality — that they couldn’t fully do if the actresses were 13.

He was interested in that time in particular because whenever you bring that period up, “it seems like everyone has these really intense emotional reactions and stories that they remember. …Everyone feels like an outsider at that age — I know I did, and I know Anna and Maya did,” said Zvibleman, who had his bar mitzvah at Congregation Shaare Emeth.

He serves as the inspiration for the character Sam on the show.

As to whether they thought Zvibleman, who sports long hair and a beard, should play Sam, he said, “No. I have tried acting and suck at it. I would have just torpedoed the show. My passion is for filmmaking and shooting and editing and writing.”

You can hear his voice in the writing on episodes like the pilot, when the girls are excited about some attention Maya appears to be getting from boys. They later discover that she is the victim of a prank.

He also said he and his female co-creators try to write dialogue free of a particular regional vernacular.

“In northern California, kids will say, ‘hella’ and on the East Coast, kids will say, ‘wicked,’ to mean the same thing, but I sort of keep a check on that, to keep it Midwest in spirit,” said Zvibleman, whose parents still live in St. Louis.

The show received positive reviews from The New York Times, the Washington Post and NPR, among other outlets.

“The juvenile joke of the title and the oddness of its casting notwithstanding, Hulu’s ‘PEN15’…is as deep and real a comedy as you will see in a year already great for television comedy,” Robert Lloyd wrote in the Los Angeles Times. “Nothing more thoroughly conceived, delicately acted or emotionally true will be coming your way, sitcom or drama or in between.”

Zvibleman, who is in the midst of writing Season 2, said he was “completely shocked” by the Emmy nomination.

“It was a total surprise,” he said. “I’m so proud because we worked so hard and it’s a very cool thing.”