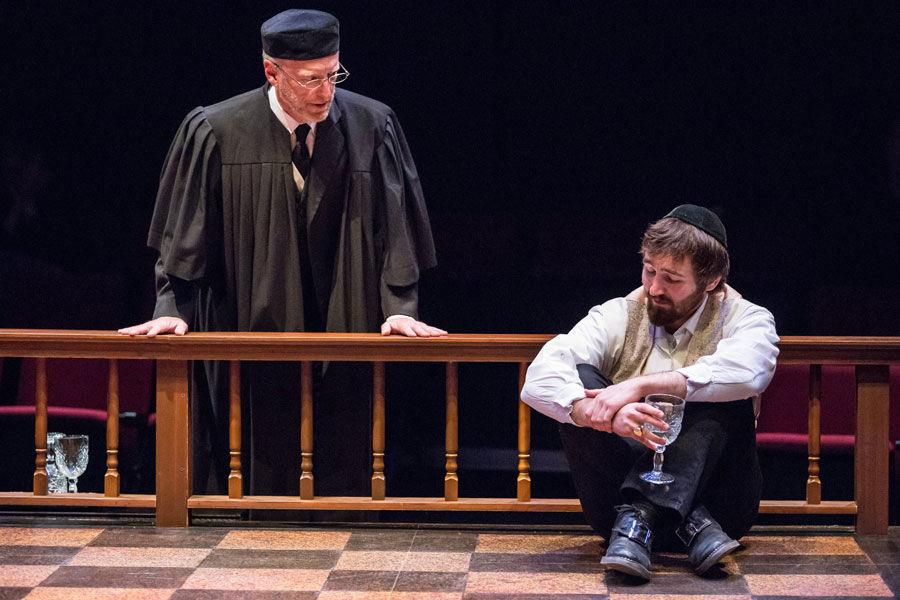 Rob Riordan and John Flack in ‘New Jerusalem’ at the New Jewish Theatre.

In one of the most shameful episodes of Jewish history, the astoundingly brilliant Baruch de Spinoza was railroaded into a harsh cherem, or excommunication, from the Jewish religion in the very Talmud Torah Congregation in Amsterdam he was once considered destined to lead. For its penultimate production of its 2017-2018 season, the New Jewish Theatre is presenting David Ives’ stirring drama about Spinoza’s infamous trial in a riveting interpretation, brilliantly directed by Tim Ocel and featuring a superb cast led by Rob Riordan in the lead role.

Spinoza (1632-1677) is regarded as one of the most influential philosophers of all time. He was descended from a family of Portuguese Conversos, his grandfather and father having escaped to Amsterdam, where they returned to Judaism and joined the respected Talmud Torah Congregation.

As a child and young man, Spinoza, whose first name means “blessing,” was the favorite and most admired student of the synagogue’s spiritual leader, Rabbi Saul Levi Mortera (portrayed with pitch perfect conflicted feeling by John Flack). Rabbi Mortera had hoped that Spinoza, who knew Torah, Tanakh and the Talmud with a nearly perfect memory and mastery, would succeed him as rabbi of the Talmud Torah Congregation.

At the age of 20, Spinoza, who had left his formal Jewish studies three years earlier, turned in earnest to philosophy. He never abandoned his formal affiliation as a Jew, but he branched out into all areas of secular philosophy, developing a skeptical, pantheistic concept of God and Nature being one and the same and renouncing beliefin the miracles of the Bible. In the process,  he violated some of the Thirteen Articles of Faith propounded by Maimonides, whose works he respected but did not fully embrace.

Spinoza’s structure of beliefs anticipated many of the modern reinterpretations of Jewish practices of Reform, Reconstruc-tionist and Humanistic Judaism, which during his life in Amsterdam were considered heretical even in a relatively “tolerant” society. Spinoza has been described by Yitzhak Melamed, a Johns Hopkins University professor of philosophy, as the “first modern European secular Jew.”

Spinoza’s published and unpublished writings challenged both Judaism and Christianity.His family’s business was in dire straits, and he found himself increasingly isolated within the Jewish community. His works were admired by rebellious factions of Christianity, and pressure was placed on the officials in Amsterdam to silence the great philosopher.

The result of the pressure was the infamous interrogation of Spinoza, which led to the issuance of the cherem, the harshest ever issued by a Sephardic Jewish community against one of its own members.

No official transcript of the interrogation, which was really more of a rigged trial than an investigation, exists. But the prize-winning playwright Ives pieced together various sources to come up with a credible reenactment of the proceeding, which took place at the synagogue July 27, 1656. Presiding over it was Abraham van Valkenburgh, a regent of Amsterdam, who forcefully takes charge.

Jim Butz brings just the right amount of intimidating authority to the role of van Valkenburgh, who is immediately challenged by other strong-willed characters, including Rabbi Mortar and Gaspar Rodrigues Ben Israel (Greg Johnston), a synagogue parnas, or officer.

In scenes that invite comparison to the shameful Catholicheresy trial of Joan of Ark, the religious and legal noose is tightened around Spinoza’s neck. Adding to his woes: His hateful half-sister Rebekah de Spinoza, fiercely portrayed by Jennifer Theby-Quinn, barges into the proceedings with venomous attacks on Spinoza. He is also betrayed by his painter friend, Simon de Vries (Will Bonfiglio), and by hisChristian lover.

Spinoza was forced to agree to stand trial and accept theharsh verdict under threat of a death penalty. He did go on with his life as a philosopher and grinder of lenses. Sadly, the shameful excommunication of one of Judaism’s greatest intellectual forces was never rescinded.

Thanks to Ives’ crackling script, skilled direction by Ocel and the first-rate cast, Spinoza finally gets his day in court. A shout-out to the production staff for creating an authentic setting, costumes, scenic design and lighting, which greatly enhance the impact of this powerful play.