Shavuot with a French accent 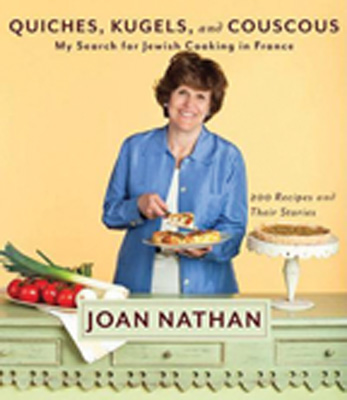 For Nathan, author of “Quiches, Kugels, and Couscous: My Search for Jewish Cooking in France (Knopf, 2010), the love affair with French cuisine started as a teenager when she made her first trip to France in the 1950s.

The prolific cookbook author says the simple pleasure of sampling a slightly melted bar of chocolate sandwiched into a crackly baguette transformed her life.

Believing a girl’s education should include fluency in other languages, her father approached a cousin in France who opened his home, immersing Nathan in his culture.

“Because I have relatives and friends who are French, I’m always curious what they’re doing for holidays,” said Nathan, who relishes visiting people’s homes to see what they eat and how they celebrate.

Falling seven weeks after Passover, Shavuot is a minor holiday with major importance, as it commemorates the giving of the Torah at Mount Sinai.

It is traditional to eat dairy foods on Shavuot, which this year falls on June 8, because of the purity of the Torah.

Nathan has vivid memories of the holiday in France from the past few decades.

Many French Jews attend synagogue in the morning and come home for a well-rounded meal at lunch — more like a dinner — as opposed to a typical American bagels-and-lox brunch.

While the French often incorporate dairy products into recipes, they don’t go overboard on Shavuot the way Americans do by eating a meal composed almost entirely of blintzes, kugels and cream cheese. The French, however, do enjoy a good cheesecake.

The most important element at French holiday celebrations is a sense of style, with elegant table settings and presentation of food. Even the least affluent Jews serve food with great care for its appeal.

Some 600,000 Jews are living in France, making it the third largest Jewish population in the world after Israel and the United States. French Jewish history goes back 2,000 years.

Many cultures have seasoned French Jewish cuisine. Over the centuries, Jews have come to France from Spain, Portugal, the Balkans, Eastern Europe and North Africa. Moving back to their original countries with French recipes, some Jews later returned to France, bringing back variations of dishes they had taken with them.

“Food has never been static,” Nathan said. “Even old recipes are in a constant state of flux and refinement, subject to outside influences and improvements.”

French Jews tend to be discreet about their religion, mostly in response to centuries of anti-Semitism. This is why Nathan, as the title of her cookbook indicates, had to search for Jewish cooking in France.

In recent decades, North African Jews have built a vibrant life in France. From Morocco, Tunisia and Algeria, they revel in their Jewishness. Fragrant with spices, such as harissa (hot red chili sauce), their foods are easy to find in French markets. Their tasty salads, sumptuous stews, hummus and couscous have great appeal for French Jewish families.

Aware of this reality, a friend of Nathan’s pleaded with her, “Please find the old Ashkenazi recipes before they die out in France and it’s too late.”

“My whole life has been about guarding the legacy of Jewish food,” said Nathan, whose research in France found many traditional Jewish foods can be traced to other countries.

“I love French cooking,” said Nathan, marveling at its variety. “The recipes in my cookbook are easy, and I use as many of them as possible on Shavuot.”

The following recipes are by Nathan from “Quiches, Kugels, and Couscous: My Search for Jewish Cooking in France.”

A traditional Sabbath and holiday bread usually made with oil but at Shavuot is prepared with milk.

Put the yeast, butter, and lukewarm milk in the bowl of a standing mixer and blend. Gradually add 6 cups of flour, the salt, and honey to the yeast mixture, stirring with the dough hook and adding more flour as necessary until the dough comes together.

Form the dough into a ball and let it rise in a bowl, covered, for 1 hour. Then divide the dough into 2 equal portions. Roll out each into an oval about 1/4-inch thick.

Preheat oven to 400 degrees, scatter some semolina on a cookie sheet, and transfer the dough onto the prepared sheet. Let rise for 30 minutes.

Brush each loaf with olive oil and bake in the oven for about 20 minutes. Eat when warm, if possible.

Peel the beets and onions. Cut them into chunks and toss them together in a large soup pot. Pour in about 2 quarts of water, or enough to cover the vegetables by an inch or so. Add the garlic, sugar, salt, and pepper to taste.

Bring to a boil, skimming the surface of any impurities that rise. Lower the heat, cover, and simmer for about an hour, or until the beets are cooked. Stir in the vinegar and let cool.

When the soup has cooled off, ladle the vegetables and some of their broth into a blender and puree to the consistency of a thick soup. Adjust the thickness and seasoning of the soup to your taste, adding more beet broth for a thinner soup.

Serve cold in soup bowls with a dollop of the sour cream and a sprinkle of one of the herbs.

This recipe has been handed down through the generations since the first Jews left Spain during the Inquisition.

Bring a small saucepan of water to a boil. Drop in the pearl onions and boil for 3 minutes. Turn off the water and remove the onions with a slotted spoon to a bowl of cold water. When they reach room temperature, cut the root ends and pop onions out of the skin.

Melt the butter over medium heat in a Dutch oven or other heavy-bottomed pan. Stir in the onions and the lettuce, and saute for 2 to 3 minutes. Stir in the peas, sugar, thyme, savory, parsley, salt, pepper, and 1/4 cup water. Cover and simmer slowly for about 5 minutes.

Gently nestle the salmon pieces among the peas, onions, and herbs. Cover and cook for 10 to 15 minutes, or until the salmon is just barely cooked through. Pluck out the herb sprigs and serve.

Popular year-round among North African Jews in France, for Shavuot this dish is made with butter and served with yogurt.

In a frying pan, saute the onions in the butter or oil over medium heat until translucent. Add the sugar and saffron, and continue to cook until caramelized and jam like. Add the raisins and almonds, cooking until the almonds are golden.

Prepare the couscous according to the package instructions, seasoning it with salt and pepper. Mound the couscous in the middle of a plate and surround with the onions, raisins, and almonds. Accompany with yogurt, if using.

This cheesecake, quite different from its American counterpart, reminds Joan Nathan of many she has eaten throughout France, including the one at Finkelsztajn’s Delicatessen in Paris.

Butter for greasing the pan

Zest and juice of 1 lemon

Preheat the oven to 350 degrees. Butter a 10-inch springform pan.

Beat together the milk, ricotta cheese, creme fraiche, egg yolks, sugar, lemon zest and juice, vanilla, and salt in the bowl of an electric mixer or another large bowl.

Toss the flour with the raisins, if using, and beat into the cheese batter.

In a clean bowl with clean beaters, beat the egg whites to stiff peaks. Gently fold them into the cheese batter in three batches. Pour into the greased pan and bake for 40 minutes, or until golden and firm in the center. Allow to cool for at least 20 minutes before unmolding.