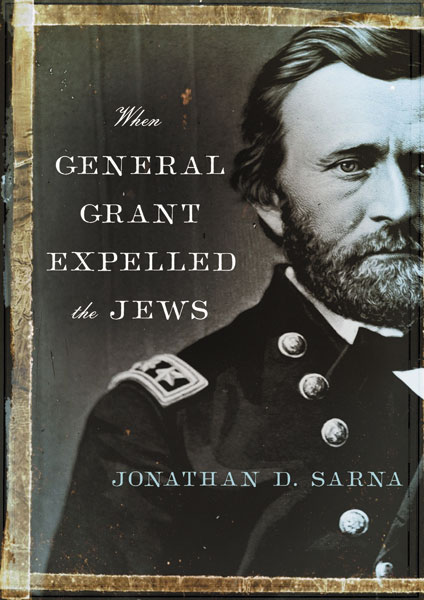 In his latest book, “When General Grant Expelled the Jews,” (Schocken, $27.95) historian Jonathan D. Sarna details the notoriously anti-Jewish “General Orders No. 11,” in which General Ulysses S. Grant in 1862 ordered the expulsion of all Jewish people in the territory under his command in an effort to stop a black market trading operation. President Abraham Lincoln quickly rescinded the order, but the aftermath greatly impacted Ulysses S. Grant’s political and personal life, and his relationship with the Jewish people.

Sarna describes Grant’s action as “the most notorious anti-Jewish order by a governmental official in American history.” But at the same time, Sarna, a professor of American Jewish History at Brandeis University and Chief Historian of the National Museum of American Jewish History in Philadelphia, asserts that later in his career, Grant not only apologized for this action, but “redeemed” himself by his positive actions towards American Jews, including during his two terms as President of the United States.

Grant’s relationship with American Jewry is especially interesting to the St. Louis community, since he resided here and married Julia Dent, a St. Louis resident; their home is now a St. Louis County landmark and tourist attraction, Grant’s Farm.

Sarna feels that it “is time to set the record straight” on Grant’s relationship with Jews after the anti-Jewish edict he issued.

He will be discussing his book, which contains newly discovered findings about Grant’s issuance of General Orders No. 11, at a special event at the Ulysses S. Grant National Historic Site, a unit of the National Park Service, also known as White Haven. Interestingly, Sarna is a key player in Jonathan Gruber’s documentary “Jewish Soldiers in Blue and Gray,” which aired in April on 196 public television stations nationwide.

The Jewish Light caught up with Sarna at his Newton, Mass. home for a telephone interview last week.

What drew you to write this book at this time?

The most obvious reason for the timing is that 2012 is the 150th anniversary of Grant’s issuance of General Orders No. 11, for which for many years has caused Jews to discount Ulysses S. Grant as an anti-Semite. If the decree, which Lincoln quickly rescinded before it could do substantial harm, is all we remember about Grant, it is unfortunate.

I wanted to set the record straight.

Exactly what was General Orders No. 11?

On Dec. 17, 1862, General Grant (then a rising general in the Union Army but not yet its supreme commander), issued and signed General Orders No. 11 to evict Jews from the large war zone (then) under his command, known as the “Department of Tennessee.” It actually stretched from northern Mississippi to Cairo, Ill. and from the Mississippi River to the Tennessee River (which did not include St. Louis). That edict was later described as “the most sweeping anti-Jewish regulation in all American history.”

How many Jews in the Department of Tennessee were affected by and responded to the Order?

Why did Lincoln react so promptly to the request by American Jews that he rescind the Order?

Lincoln said that he did not ‘like to hear a class or nationality condemned on account of a few sinners.” The Order was issued during the period when Lincoln issued the Emancipation Proclamation…Some Jews explicitly feared that Jews might replace Blacks as the nation’s most despised minority, that freedom for Blacks would spell trouble for Jews. So even though Lincoln promptly rescinded the order, it had lingering effects.

How far back in your career did you become interested in Grant’s General Orders No. 11?

Actually, the story of Grant’s General Orders No. 11 expelling ‘Jews as a class’ from his war zone once placed my academic career in jeopardy. In 1982, as a young faculty member at the Hebrew Union College-Jewish Institute of Religion in Cincinnati, I was invited to address the institution’s Board of Overseers. This was an important rite of passage for a new faculty member, and I was determined to prove myself. Since my lecture more or less coincided with the 120th anniversary of the infamous 1862 order, I decided to talk about that event.

My lecture seemed to be going well, until I stated that although Grant had singled out Jews as smugglers — the generally accepted reason for the expulsion order — we now know that smuggling had been rampant throughout Grant’s territory and was by no means a Jewish monopoly.

So, if smuggling was not a Jewish monopoly, why specifically did Grant single out the Jews for expulsion?

In  fact, I enthusiastically  continued in my lecture, Grant’s own father, Jesse Grant, was engaged in a clandestine scheme to move Southern cotton northward.  His partners were Jewish clothing manufacturers named Herman, Henry and Simon Mack.

So Grant was concerned personally over his own father’s involvement with smugglers from the Jewish Mack  family and that was the motivating incident for his issuance of General Orders No. 11?

Sounds pretty straightforward. So how did this place your academic career in apparent jeopardy?

When I mentioned the Mack family connection to Grant’s father, a few chairs in the room began to shift uneasily, and my mentor, the pioneering Jewish historian Jacob Rader Marcus, buried his face in his hands. That, I knew, spelled trouble. I had just said something terribly wrong. Not knowing what the problem was and fearing for the security of my job, I hobbled to the end of my lecture and invited questions. An old man in the front row promptly raised his hand and rose to his feet. “My name is Mack,” he began. Then, looking me straight in the eye, he announced, “That was my great-grandfather you were talking about.” And, he continued after a long pause, “It’s all true.” The room relaxed. Dr. Marcus looked up. Everybody smiled. My academic career was safe.

So what, besides the 150th anniversary of the event, drew you back for a more detailed look at Grant?

Most Jews of the 21st Century do not know that Grant expelled Jews from his war zone in 1862 and that during his presidency (1869-1877), he transformed himself from a villain, a Haman, into a hero, a Mordecai. Too often we categorized our leaders as either “all Haman” or “all Mordecai.” Like other U.S. presidents, Grant was a combination of both qualities.

How did the Jewish vote affect the vote for Grant in the 1868 presidential election?

Grant emerged the winner by a large margin. Except perhaps in New York, where he lost by precisely 10,000 votes and fraud was suspected, the Jewish vote could not have made much of a difference.

Once installed as president, how did Grant accomplish his redemption to the Jews of America?

With the election over, Grant permitted a private letter he had penned concerning General Orders No. 11 (to his friend, former Congressman Isaac Newton Morris) to be released to the press. In the letter, Grant said of General Orders No. 11, “I do not pretend to sustain the order. The order was issued without any reflection and without thinking of the Jews as a sect or race — did not bear up well under close scrutiny… I have no prejudice against any sect or race, but want each individual to be judged on his own merit.’” Even Isaac Mayer Wise praised the letter as ‘noble and generous’ in his own Jewish newspaper. From Jewish eyes, the letter lifted the taint of “Haman” from Grant’s shoulders. Also as President, Grant made more Jewish appointments to key positions than all of his predecessors combined.

Did Grant continue his positive relationship with Jews in his second term?

Yes, during his second term, Grant devoted considerable effort to strengthening church-state separation, vowing to “keep the church and state forever separate.” He made history on June 9, 1876 when he became the first American president to attend the dedication of a synagogue, during the observance of the celebration of 100 years of U.S. independence with an appearance at Washington, D.C.’s Adas Israel synagogue. He also made a personal pledge to the synagogue…The man who had once expelled “Jews as a class” had personally honored Jews in Washington, D.C. for upholding and renewing their faith.