‘Schindler’s List’ at 25: How Steven Spielberg’s deeply Jewish story spoke to the masses 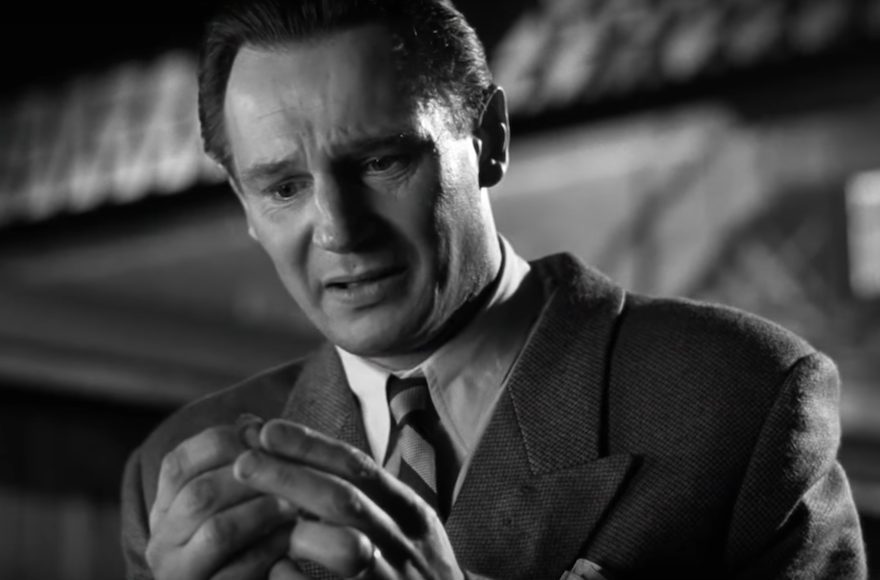 Michael Berenbaum
LOS ANGELES (JTA) — 1993 was a dramatic year in the memorialization of the Holocaust.

In April, the United States Holocaust Memorial Museum opened its doors; 45 million visitors later it is a fixture adjacent to the National Mall in Washington, D.C., not only telling the story of the Holocaust but demonstrating the  ongoing significance of this Jewish event – this European event – to the American people, to Western civilization and to the world.

In November of that year, Steven Spielberg, widely recognized as the most influential director of this generation, released his monumental work “Schindler’s List” to international acclaim. Forsaking many of the tools of his profession, including the beautifying effect of color, Spielberg created a masterpiece. Nominated for 12 Academy Awards, it won seven, including best picture, best director, best adapted screenplay and best original score. The overture to “Schindler’s List,” written by John Williams, is routinely played whenever Holocaust events are held. Its haunting tones evoke not only the motion picture but the event itself.

Expected to lose money, “Schindler’s List“ was probably greenlighted by Universal Studios because Spielberg was Spielberg, a director’s director. He personally vowed not to make money on the film, saying his task was sacred, not entrepreneurial. Yet despite its length of over three hours, which made two screenings an evening difficult, it grossed $321 million in its initial release, more than 14 times its original cost. Spielberg donated his entire share to charity.

The story of Oskar Schindler was cherished by its survivors but little known even by experts. For years Leopold Page would tell his story to people who walked into his Beverly Hills luggage store hoping that one of his prominent customers would bring it to the screen. Australian writer Thomas Keneally walked in one day. The result was his 1982 historical novel “Schindler’s Ark.”For decades two New Jersey developers, Murray Pantirer and Abraham Zuckerman, named a Schindler Drive or Schindler Road in each of their New Jersey developments, honoring the man who saved their lives. Only later – much later – did residents of their developments understand who was being honored and themselves feel honored by their address.

Schindler, a Sudeten German, was an unlikely Holocaust hero. A philandering Nazi war profiteer, he used Jewish money, Jewish talent and Jewish slave labor to build his metalworks business and his fortune. His transformation was gradual. He saw too much evil and then used the same cunning, and daring, to save his endangered Jews. He moved them from Krakow to Czechoslovakia along with his factory, and they survived the war. More than 1,200 Jews were rescued due to his interventions.

Spielberg resisted the temptation to valorize Schindler, who was portrayed brilliantly by Liam Neeson, warts and all. Spielberg couldn’t quite end the film, perhaps because he didn’t want to, so he gave filmgoers four endings: Schindler’s final speech wishing he had done more; the Jewish workers walking away into an uncertain future; a segment in color featuring real-life survivors visiting Schindler’s grave; and a closing title card reading simply, “There are fewer than 4,000 Jews left alive in Poland today. There are more than 6,000 descendants of the Schindler Jews.”

The film is widely recognized as one of the finest ever made and gained such a moral stature that it was aired by NBC without commercial interruptions. Ford’s sponsorship of the broadcast was perhaps an act of atonement or posthumous justice: Company founder Henry Ford, publisher of the anti-Semitic Dearborn Independent and the American disseminator of the “Protocols of the Elders of Zion,” was honored personally by Hitler.

“Schindler’s List” had a monumental unintended consequence. Survivors kept coming up to Spielberg and saying “have I got a story to tell you,” and the filmmaker listened with ever-growing fascination. As a man who could move millions with his work and was at the forefront of technological innovation, Spielberg vowed to record the testimonies of 50,000 survivors and preserve them for posterity. Naturally he chose video.

The result was what was then called the Survivors of the Shoah Visual History Foundation, which took the testimony of 52,000 Holocaust survivors in 57 countries and 32 languages, compiling the largest collection of oral history of any historical event.

Examples abound: In my own work with the Illinois Holocaust Museum & Education Center, the testimonies of Chicago-area survivors were turned into a dozen films. Macedonia has used Macedonian testimonies, Mexico City Mexican testimonies. It is the gift that keeps on giving as scholars have made use of it for their research. Even great document scholars, such as Christopher Browning, learned the historical importance of oral history. Related films have been made on death marches and Sonderkommandos, the prisoners who worked in the vicinity of the death camps, areas where documents are few and memories deep.

Now housed at the University of Southern California, the renamed Shoah Foundation Institute for Visual History and Education is pioneering a video dialogue with survivors using voice recognition software. It allows a genuine conversation with holographic images of survivors, drawing on their  actual testimonies. It is taking testimony from other genocides, Cambodia and Rwanda and Bosnia, as sadly the list grows. And institutions throughout the world are creating educational programs from this work.

Spielberg himself has become a major moral voice of our generation, a voice that only grew with time and with new works such as “Saving Private Ryan,” “Lincoln” and most recently “The Post,” to name a few — films that grapple with racism and slavery, war and memory, freedom of the press and the courage to take a stand.

Spielberg himself grew more comfortable and more profound in his Jewish identity and his ability to embrace that identity without being narrowly parochial or limiting the audiences for his films. His name is synonymous with excellence — film excellence and moral excellence. And his stature poses a challenge to filmmakers of all generations to engage their own tradition and speak through that experience to the world.

Like the U.S. Holocaust Memorial Museum, “Schindler’s List” demonstrated that a Jewish story could remain deeply Jewish and yet speak to the mainstream not only of American society, but the contemporary culture as well.

In Krakow last week, I stood in line with hundreds of visitors at Schindler’s factory, where a museum has been created. It attracts visitors from throughout the world, all of whom were drawn to the place because of the story Spielberg told as only he could: of a scoundrel who over time became noble. For after all, “he who saves a life, saves the world entire.”

Michael Berenbaum, professor of Jewish studies and director of the Sigi Ziering Institute: Exploring the Ethical and Religious Implications of the Holocaust, was president of the Survivors of the Shoah Visual History Foundation from 1997 to 2000.