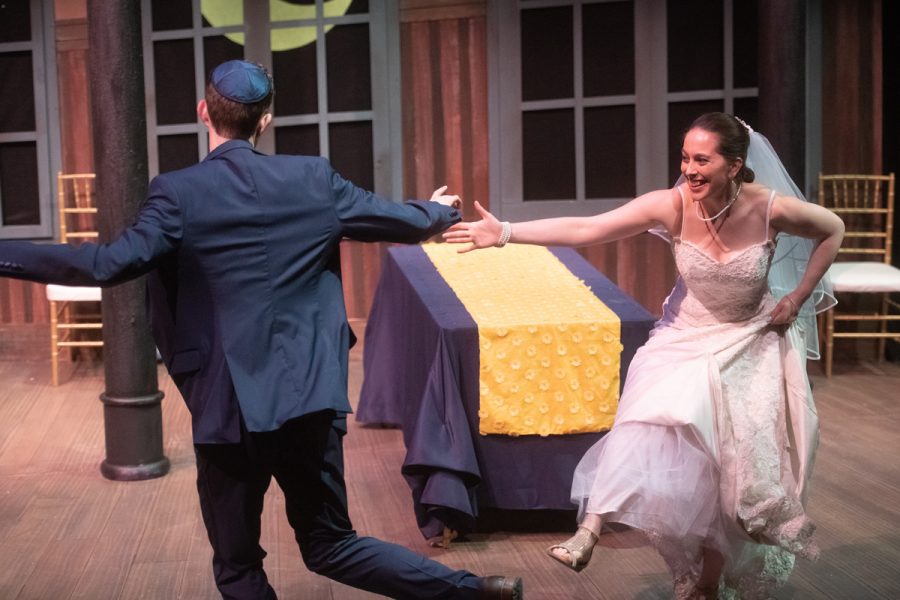 By Judith Newmark, Special to the Jewish Light

A wedding is a lot like theater, complete with stars, costumes, sets and, not infrequently, plot twists. So, if writers take inspiration from the altar, why not?

After all, the source material is abundant.

Playwright Tasha Gordon-Solmon draws from that well in “I Now Pronounce,” a comedy closing the 2018-19 season at the New Jewish Theatre.

Although many members of the audience have doubtless enjoyed their generous share of Jewish weddings, it takes a little while to get into the play’s rhythms. That’s because Gordon-Solmon and director Edward Coffield aren’t telling a straightforward story.

True, we move chronologically through the evening, a transition cleverly tracked by a glowing moon outside the windows of David Blake’s simple set. The play opens with an aged rabbi (Craig Neuman) alone under a huppah. We must imagine a wedding party, including a bride and groom whom he seems never to have met. It’s kind of … expressionistic?

From there, we move into a series of short scenes — skits, really — that gradually blossom into character sketches.

This is where the comedy finds its legs. “I Now Pronounce” descends from two great wedding comedies of the screen: “Lovers and Other Strangers,” which was originally a Broadway play by Renee Taylor and Joe Bologna but is best known in its 1970 movie version, and Robert Altman’s 1978 “A Wedding.”

Both ensemble pieces, they explore quirky characters who, fueled by the emotion of the occasion and, in many cases, by an open bar reveal more of themselves than they likely intended, partly to each other and certainly to us. “I Now Pronounce” is their daughter.

We have a bride, Nicole (Jessica Kadish), and a groom, Adam (Graham Emmons), both full of doubts and dismayed by an unfortunate event that might be considered an omen if you’re inclined to look at things that way. Their quarrelsome first dance might be a kind of omen, too.

One bridesmaid, Eva (Frankie Ferrari), delivers the ultimate TMI toast and instantly regrets it. But she has a warm heart, something she reveals when she gently tries to coax the screaming bride out of hiding in the ladies’ room.

Eva strikes up a conversation, and more, with a glum groomsman, Seth (Ryan Lawson-Maeske). The two actors reveal real chemistry in their comedic “courtship” (although there’s no explaining why Gordon-Solmon has Seth, who in this production seems more Jewish than anyone but the rabbi, mention church. Why not leave it vague? It’s the playwright’s one glaring misstep.) The two are a delight, as Ferrari chatters and Lawson-Maeske sinks further and further into unspoken gloom until they come up with an alternative.

Will Bonfiglio gives a sharp performance as snarky Dave, a groomsman who thinly veils his egotism in the guise of helpfulness.

And as bridesmaid Michelle, Delaney Piggins just about steals the show. Her long, lavishly detailed monologue about true love — doves are involved, an entire room full of doves — adds up to a hilarious, dead-on summary of fairy-tale romances that are supposed to culminate in “perfect” weddings. Juxtaposed with a decidedly imperfect one, the scene is ridiculous and touching, and Piggins hits both notes simultaneously. She’s a real find.

In many shows about weddings (the musical “It Shoulda Been You,” the third act of Neil Simon’s “Plaza Suite”), the parents of the bride and groom are big roles. Here, they are entirely absent. But Gordon-Solmon still manages to leap generations. She gives us three flower girls, charmingly played at NJT by Millie Eidelman, Abby Goldstein and Lydia Mae Foss.

Although they need more volume and clearer diction, the girls look adorable. If there were better sound equipment, that might have resolved this age-appropriate and entirely predictable problem.

“I Now Pronounce” is never going to be the last word in Jewish stage weddings, a position held now and probably forever by the marriage of Tzeitel and Motl Kamzoil in “Fiddler on the Roof” (even if it does end in a pogrom). But with its quick, bright character sketches from the ensemble and its willingness to take a chance on love, this comedy earns a spot up there with a pair of terrific old movies.