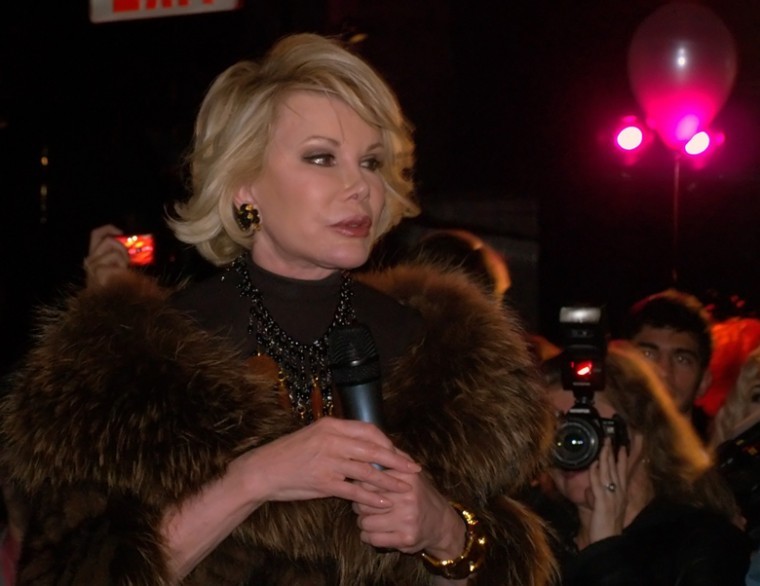 Joan Rivers, seen here speaking at a party in New York in 2010, told an Australian newspaper that she has undergone 739 plastic surgery procedures.

By JTA Staff, 6nobacon.com
NEW YORK — The post-Super Bowl “Late Night with Jimmy Fallon” featured Adam Sandler and Andy Samberg. Both have SNL under their belts (Fallon does too), both are very Jewish and, according to Sandler, they both have a pretty similar name — which is enough for them to actually work together on a new movie, “That’s My Boy.”

Not many serious topics were discussed, though Samberg said he had always wanted to play Sandler’s son, since their nose resemblance is just uncanny. Sandler, Samberg and Fallon also impersonated one another — a pretty simple task for Sandler (mentally challenged 8-year-old?), but Sandler’s imitation of Fallon and Samberg was the winner.

And Fallon did a keg stand, with Samberg and Sandler holding his legs. He only lasted five seconds.

You know how sometimes you’re watching TV and all of a sudden Joan Rivers appears and someone always says, “Man, she’s probably had over 500 plastic surgeries!”

Believe it or not, the number is actually higher: 739!

In an interview with the Australian Daily Telegraph, Rivers, 78, admitted that having plastic surgery for her is kind of like going to Starbucks for others, except that the coffee at the clinic is probably better.

“Every weekend I just go in and I do something new. I get a 10th one free,” Rivers said. “It’s a little like coffee; you just keep going.”

Rivers, whose new reality TV show “Joan & Melissa: Joan Knows Best” is threatening to kill your TV from the inside, was interviewed alongside daughter Melissa, who apparently is not really happy with her mom’s knife fetish.

”At one point I start to think the risk outweighs the reward, so I wanted my mom to know how I felt about it and I think I made myself fairly clear,” Melissa said.

Apparently that didn’t really work out, though Joan is taking pride in one thing she hasn’t done yet: a tattoo. Melissa joked that her mom should tattoo her home number on her body, with a message: “If lost, please call Betty White.”

By the way, in case anyone is contemplating trying to keep up with Rivers, at a rate of one surgical procedure a week, it should take a little more than 14 years to reach 739. It’s a long time, but think how spot-on your Joan Rivers Halloween costume will be in 2026.

He may not have the storytelling strength of Steven Spielberg or the cinematic artistry of Terrence Malick, but Judd Apatow is finally getting the kudos he deserves as a fantastic director/screenwriter/everything else.

The Writers Guild of America will be honoring Apatow at its Feb. 19 awards ceremony, with Kristin Wiig presenting the satirical director with his award. While some may consider this an undue honor (everyone just looooves those serious movies), those haters are wackadoos. The Juddster has taken the comedy genre and turned it on it’s head, creating a new brand of funny that appeals to the elitists and frat boys alike.

Parker in for Moore in ‘Lovelace’

Hey, remember Demi Moore? You know, the hottie who went all angsty-tween after her separation by huffing nitrous oxide and chilling with Disney love child Zac Ephron?

Parker was http://www.nydailynews.com/entertainment/movies/lovelace-set-photos-surface-sarah-jessica-parker-replaced-demi-moore-film-article-1.1015943″>photographed recently on the “Lovelace” set dressed as feminist leader Gloria Steinem (Demi’s original role). Producers reportedly courted Parker after Moore dropped out and now will star in the film alongside Amanda Seyfried as the title character.

News first surfaced a few months ago that Oprah Winfrey had made an unusual visit to a mikvah in Brooklyn Heights as part of her new series, “Oprah’s Next Chapter.” More details are now available about Oprah’s forthcoming show about Chasidic Jews and their “usually private and mysterious way of life.”

According to OWN, the Oprah Winfrey Network, “During the episodes, Oprah spends time with two Hasidic Jewish families who give her unprecedented access into their world, revealing secrets into their usually private way of life. Oprah sits down with a family of twelve as part of her visit, enjoys a traditional meal, and meets one of the few black Hasidic Jewish families in the country.”

The two-part show will air on consecutive days starting Feb. 12.

Mark Cuban has a history of successful investments. He was one of the pioneers of webcasting and owned an NBA team, the Dallas Mavericks, that finally won the championship.

Cuban is a judge on the ABC entrepreneur show “Shark Tank,” in which people pitch business ideas to major investors who can choose whether to invest in them. Last Friday, this dorky-looking guy named Steve Gadlin appeared on the show to talk about his website, I Want to Draw a Cat For You. For $9.95, Gadlin will draw you a little cat stick figure. Pretty simple, right?

According to TMZ, Gadlin only spends about 63 cents on material. Sounds pretty profitable, enough for Cuban to invest $25,000 in exchange for 33 percent of the company. Cuban’s investment caused the website to crash, with thousands of immediate requests instead of the weekly 10 to 40.

To anyone who doesn’t take the online cat phenomenon seriously, who’s the last to laugh right meow?

Portman to show off her ‘Scruples’

Harvard grad, Oscar winner and new mom Natalie Portman can add http://www.6nobacon.com/2012/01/31/natalie-portman-to-show-off-her-scruples/ “>a new title to her resume. According to Reuters, the “Black Swan” star is set to produce the new ABC series “Scruples,” based on the 1970s classic novel by Judith Krantz.

While the book was already made into a relatively successful miniseries in the 1980s, this version will be bigger, badder and way hotter. The hourlong drama is being billed as a “sexy soap set in the late 1970s” that revolves around a socialite who opens a fashion boutique following the death of her husband.