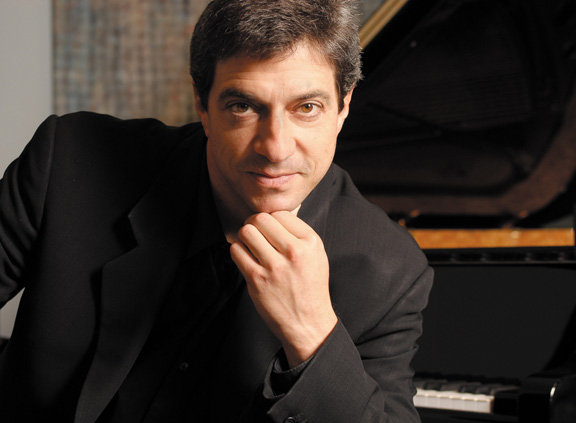 Musicians will go through a lot to get the right gig. All Sam Glaser had to do was put on tefillin, something easier said than done. He hadn’t used phylacteries since his bar mitzvah.

Unsure if he’d even put on the strap correctly, Glaser began running through a few of the prayers when the phone rang.

“It was the sports channel of Los Angeles asking me to do all the music for the Dodger and Angel home games that season, which was a really amazing gig,” he said. “I thought, ‘We’re going to try this again tomorrow.'”

“It hasn’t happened since then but it definitely got me launched on a journey,” he added with a laugh.

Glaser may chuckle about it now but that experience with Jewish spirituality nearly two decades ago brought him far more than one gig. It brought him a closer relationship to God. It also gave a new focus to his career. A young singer with two secular albums to that point, most of the last 18 have been Judaic. Since 1997, he’s brought his unique sound to at least 50 cities annually and every year one of them has always been St. Louis. Now he’s coming back. Glaser will give a performance at U. City Shul on Nov. 13 at 8:30 p.m.

Rabbi Elazar Grunberger said such performances are part of a master plan he’s been working to implement since becoming the synagogue’s full-time rabbi in March of last year. Grunberger hopes to bring in a lineup of speakers, musicians and other programming allowing the organization to serve not only the congregants but the adjacent neighborhood as well.

“My vision has been for the U. City Shul to be like a community outreach center, particularly for the seven zip codes surrounding the U. City area,” he said.

Grunberger said Glaser, whom he’s known for 20 years, is the perfect choice to be a part of that effort. In the past, he’s played in venues ranging from Central Reform Congregation to Aish HaTorah to the Jewish Community Center.

“Besides the music being high-quality and being so talented as a recording artist, he also has a great message of outreach and inclusion,” Grunberger said. “That’s very important. He brings Jews together from all walks of Judaism and that’s what I love.”

Glaser is pretty proud of that fact, too. But while he may believe in unifying Jews he doesn’t always feel that way about blending together all his distinctive sounds.

“Every album has its own unique flavor,” he said. “I’m emphatic that whenever I put one out it tells a story. I don’t put rock and pop and jazz and klezmer all in the same album.”

Glaser’s first attempt to express his passion for Judaism came with his 1992 release “Hineni,” (meaning here I am). It seemed a fitting title for his introduction to Jewish music, a genre the Los Angeles native was only dimly aware even existed at the beginning of that decade. Yet as he started to yearn for deeper spiritual meaning in his own life, he began to do more Jewish songwriting. It wasn’t long before he started getting calls to perform Judaic tunes. He found that as his Jewish repertoire built musically his own inner desires for meaning were being satisfied as well. His talent built on his spirituality and his spirituality in turn built on his talent.

“At one point I started realizing that I’m feeling like a hypocrite here in that I’m talking a lot about Judaism but I’m not really doing anything about it,” Glaser said. “When I started personally investing in the Sabbath and a relationship with God it really started to profoundly affect my music.”

Since then, the father of three has toured from London to Hong Kong to Tel Aviv. He has served as executive director of the Jewish Music Commission and produced the American Jewish Song Festival and American Jewish Idol. He was also music coordinator for the Department of Continuing Education at the California-based University of Judaism.

Today, Glaser doesn’t just perform in concert to fire up others about their own spiritual journey. He also offers 28 different “living inspired” workshops covering a range of Judaic topics for teenagers. The day before his U. City Shul performance he’ll be presenting some of those at Block Yeshiva High School. He’ll also give a concert focusing on children’s music to H.F. Epstein Hebrew Academy during his visit.

He said he’s glad to return once again to the Gateway City, a place where he’s even been booked for weddings by congregants who have seen him perform at their synagogue.

“I want to get people inspired and excited about their Judaism,” he said. “My big goal on the road is just to increase Jewish enthusiasm, get people out of their day to day and get them thinking about deeper issues.”

And it’s that sense that makes him happy to know he’s not just another face in the secular music crowd waiting for the next big record deal.

“That’s a tough road,” he said. “Something about Jewish music, finding a niche where I felt loved and needed was strong incentive.”

On Friday, Nov. 12, U. City Shul will host a Carlebach-style Shabbat service with Glaser followed by dinner. The cost is $20 for adults or $10 for those 12 and under. Children under five eat free. After the Saturday’s concert, Glaser’s latest album will be available for purchase.