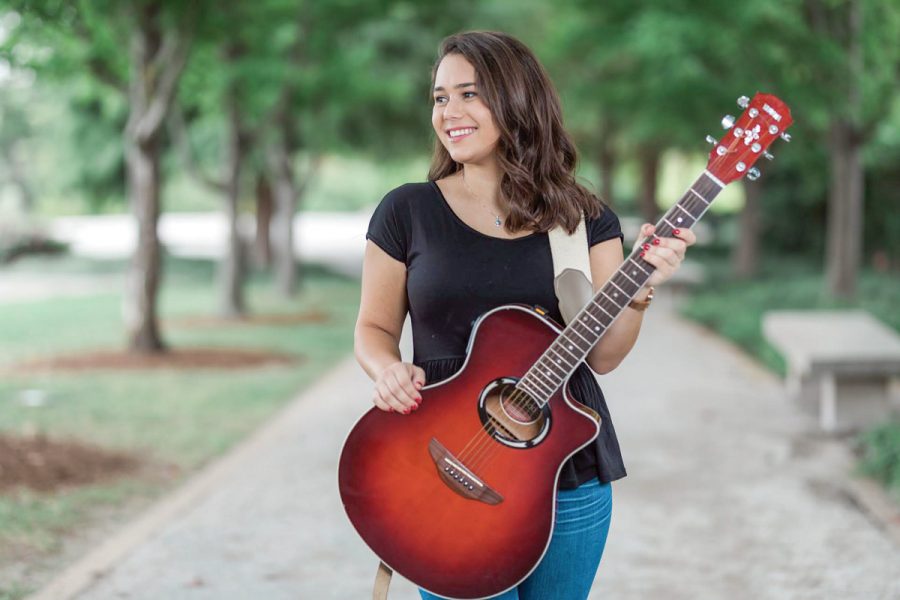 Lucy Greenbaum was always told she should become a cantor.  Before high school, music was just her side gig. She sang at open mics and coffeehouses, never taking her performances too seriously.

But Greenbaum’s cantor urged her to participate in the songleading program at Kutz Camp, a Union for Reform Judaism leadership camp in New York for high school students.

She didn’t expect to fall in love with Jewish music. But a few short years after her time at Kutz, Greenbaum had led Washington University’s Jewish a cappella group, released her debut album and in June accepted her first post-graduate job as Congregation Shaare Emeth’s music and youth engagement coordinator, a position designed just for her.

Greenbaum’s singing will make you smile. Her spiritual lyrics are backed with guitar strumming and a bit of percussion, bound together with her cheerful voice. She’s already been a huge hit at Shaare Emeth: People of all ages love joining Greenbaum in song.

“She’s a really inviting worship leader,” Shaare Emeth Rabbi Andrea Goldstein said. “(Greenbaum can) inspire people in a worship setting through the beauty of her voice and the openness with which she leads.”

A native of Phoenix, Greenbaum, 22, has experience with songleading. During her junior year at Wash U, she was the music director of Staam, the university’s Jewish a cappella group. She planned rehearsals, led warmups and readied the group for performances. As a senior, she continued her leadership in the group, serving as its tour coordinator, a role she had shared with other Staam members during her sophomore and junior years.

Greenbaum, who graduated in May, said sheis thrilled to stay in St. Louis and join Shaare Emeth’s team. The congregation keeps her busy. She mentors middle school children in songleading after Sunday school, leads the music at Shaare Emeth’s midweek and Sunday religious school programs and plays music for Tater Tot Shabbat, a program for kids through age 5.

She also is the youth group adviser for children in grades 4-12 and helps with NFTY. Greenbaum, a NFTY alumna, will put together NFTY’s lounge night, a teen hangout once or twice a month, and work to coordinate its Missouri Valley Fall Chavurah, a program uniting Missouri Valley high schoolers at Shaare Emeth in November.

Greenbaum joins Goldstein in Prayer Lab, an alternative service run jointly through the Jewish Mindfulness Center of St. Louis and Shaare Emeth. The monthly musical service was Greenbaum’s idea, and she coordinates it with fellow musicians.

And she does a bit of bikur cholim, visiting the sick alongside Shaare Emeth’s rabbis. She recalled a powerful moment in a hospital’s neonatal intensive care unit when she sang Mi Sheberach, the Jewish prayer for healing, for two premature babies who ultimately thrived.

But right now, the synagogue is wrapped up in Camp Emeth, an eight-week summer camp for children in grades K-8. Greenbaum spends her summer days working with Camp Emeth’s mostly high school-age counselors and singing with the kids.

“I just want them to find their community at this camp and know that people they are spending their summer singing next to are the people that they can probably count on for a long time,” she said.

Greenbaum is a Camp Emeth veteran; she was the music specialist there last summer. Throughout her senior year at Wash U, Greenbaum interned for the synagogue and loved it. The feeling was mutual. Shaare Emeth’s staff was grateful to have Greenbaum and wanted to keep her.

“Lucy brings a joy to everyone, and when Lucy presents and sings, people are in awe,” said Rosalie Stein, Shaare Emeth’s executive director. “She has the presence and musical capability of bringing everyone together. It’s amazing for Shaare Emeth, and it’s amazing for the community that she stayed here.”

It’s no wonder Shaare Emeth wanted Greenbaum to work for them: She is a rising Jewish music star. Her 2017 debut, the EP “Sing Your Strength,” recorded with Kosher Style Records in Los Angeles, is positive, inviting and inspiring. The album, available through streaming services including Apple Music and Spotify, features four upbeat tracks: “Adonai S’fatai,” “Mi Chamocha,” “L’cha Dodi” and “Shalom Rav.”

Each song has a different story. “Adonai S’fatai” was born from frustration and anger. Greenbaum had gone to a protest in February 2017 over President Donald Trump’s executive order barring nationals of seven mostly Muslim countries from entering the United States. Excited that her voice was heard in the throng, Greenbaum started humming a melody and searched for a prayer to pair with it. The phrase Adonai s’fatai tiftach (“God, open my lips”) from Psalm 51 matched her feelings, and the song flowed from there.

“Shalom Rav (Abundant Peace)” came from a feeling of conflict and uncertainty. Greenbaum had just transferred to Wash. U for her sophmore year and felt out-of-place. The words, part of the Amidah’s final blessing, brought her solace during this time of unease.

Greenbaum, who writes in English and Hebrew, often uses Hebrew prayers as her inspiration.

“I find a lot of comfort in writing a new melody to traditional words,” she said.

Greenbaum poured her emotions into her latest track, “L’takein Et Ha’Olam.” Upset by the Senate confirmation hearings in October that elevated Brett Kavanaugh to the Supreme Court, Greenbaum channeled her anger into lyrics and melodies, putting her own spin on Dan Nichols’ song.

“It stemmed from my feeling of frustration with the world and the government,” Greenbaum said.

“L’takein Ha’Olam” has brought Greenbaum success. She won the Jewish Star singing competition with it. Apprehensive about applying to the “American Idol”-like competition run through nonprofit radio station Jewish Rock Radio, Greenbaum ultimately submitted the song. The public voted her one of the competition’s seven winners, and Greenbaum’s prize was to record it, which she did in February.

She joined her fellow winners in St. Louis for Songleader Bootcamp, a Jewish music conference headed by Jewish rock musician Rich Recht. Jewish songleaders and aspiring songleaders from across the country convene annually in February at the St. Louis Jewish Community Center to learn about songleading and share Jewish music. Greenbaum has attended multiple Songleader Bootcamps and performed there.

Greenbaum is close with Recht. She joined him on Jewish Rock Radio, a station he founded that plays Jewish and Israeli music all day. The station features sessions with artists like Greenbaum, who was interviewed for its “Emerging Artists Podcasts.” Her songs are played during the “Jewish Women Rock” hour aired once or twice a week.

She also accompanied Recht in some of his “Jewish Rock Radio Live Across America” concerts, where Jewish musicians from different cities record concerts together and post them online.

Greenbaum hopes her new job will help her achieve her personal mission: bringing hope and healing through music.

“Jewish music is more than music, it’s more than Judaism,” she said. “It’s a way for people to connect with their spirituality in a way that is both vulnerable and powerful.”

“36 and Under” highlights interesting Jews aged 36 and under who either currently live in St. Louis or have spent a significant amount of time here. If you want to recommend someone for this intermittent feature, email [email protected]