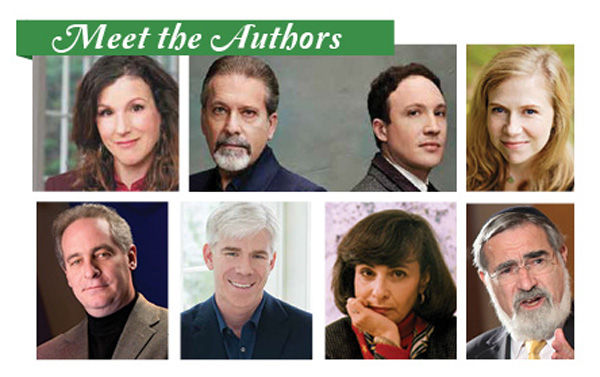 More than 30 presenters will put in time at the 37th Annual Jewish Book Festival set to kick off next week, covering topics from politics to religion to cooking.

“I think all the stars aligned this year to get this great schedule,” said Zelda Sparks, director of cultural arts at the Jewish Community Center.

Festival director Scott Berzon said that the event is among the biggest in the nation ranking with Houston, Atlanta and Detroit though various festivals measure their size using different yardsticks.

“There are several that claim to be the largest in the country,” he said. “We’re one of them.”

The 2015 iteration of the event has a bit of a different format showcasing three keynote speakers instead of just one. Though Ambassador Dennis Ross will keynote the opening day of the festival Nov. 1, two keynotes already gave talks this month. Anita Diamant, author of “The Boston Girl” spoke Oct. 13 and former Federal Reserve chairman Ben Bernanke gave a talk last week.

Ross, a longtime figure in the Israeli-Palestinian peace process, will speak at 7 p.m. Sunday about his book “Doomed to Succeed,” which looks at the history of Israeli-American relations from Truman through Obama (see related story below).

Other highlights of this year’s two-week event are slated to include Emmy Award nominee Ilan Stavans giving a presentation of his book on the Jewish connection to travel, Brian Abrams speaking about how to “Party Like a President,” which covers the personal vices of American leaders from gambling to marijuana and “Eat. Read. Live.” — a special women’s event moderated by Janice Kaplan. Nov. 6 will be “Food Friday” with two culinary authors.

The event’s second week will feature Tess Gerritsen talking about her thriller “Playing with Fire,” Judith Viorst discussing her book regarding the peeves and pleasures of marriage and a panel of local authors including Gail Benick, John Daniels and Dick Weiss.

Music and dance will play a role as well. Nov. 8 will feature a tango concert in partnership with the St. Louis Symphony, along with dance lessons for the uninitiated, and the festival will close with a dance performance by the Saint Louis Ballet Company on Nov. 15.

Another unusual event will include a session of mahjongg, which will be held in connection with Ann Israel’s presentation of a book on the subject Nov. 10. Participants must register in advance to play.

“My job as the director is not only to bring in great authors but also to make sure there is something for everyone,” said Berzon. “This year, we really have what I would consider to be one of the widest ranges of topics.”

Sparks said she is looking forward to a number of events, including the talk from Rabbi Lord Jonathan Sacks on Nov. 2. The London author will speak on his work “Not in God’s Name,” which addresses the problem of religious violence.

“Not everybody knows who he is but for those who do, he is like a superstar,” she said.

She’s happy to see a panel by the Kellermans, a family of mystery writers on the agenda for Nov. 11. There’s also news personality David Gregory who will speak on Nov. 9 regarding a work he was inspired to write when then-President George W. Bush asked him “How’s your faith?”

“His book is called ‘Finding Faith’ and he’s exploring his own Jewish faith and the faiths of others,” Sparks said.

Though the heart of the festival is in November, the main event will also kick off a series of “bookend” events with additional authors set to run once a month from December through April.

Ticketing options for this year’s festival have changed a bit. As always, seats for presentations can be purchased individually as can an $85 “Premier Pass,” formerly known as “series-plus,” which includes November presentations as well as access to the bookend events. However, the previous “series ticket,” which included only November events, has been eliminated.

“We’ve sold more Premier Passes this year than we have in many, many years,” said Sparks. “We’re edging toward 600 of these right now.

She and Berzon both advise that option.

Berzon said he expects a total of more than 10,000 people to attend events throughout the year.

“I think it is important to always note that even though it is called the Jewish book festival, our audience members need not be Jewish,” he said. “Our topics are so diverse that everyone really is welcome. I would encourage people to take a look at the lineup and find something that appeals to them.”