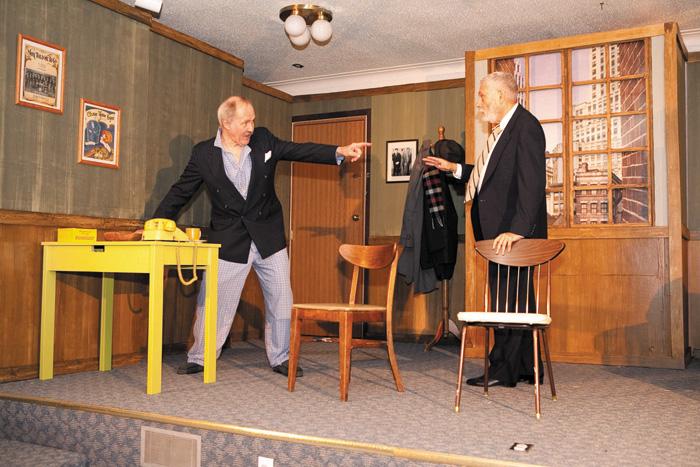 Gil Nussbaum (left) as Willie Clark and Sam Hack as Al Lewis in 'The Sunshine Boys.'

Gil Nussbaum, 71, is artistic director and founder of the Aliyah Theater, an organization now in the second week of its first production, “The Sunshine Boys,” which will run Sept. 30 and Oct. 2 at 8 p.m. and Oct. 3 at 2 p.m. at B’nai Torah, 1701 St. Peters-Howell Road. For more information, visit www.aliyahtheater.com.

Why did you choose the name Aliyah?

Aliyah means ascent in Hebrew, climbing to a higher plane. I named it that in that it reflected a desire on my part that the offerings of this theater should stimulate intellectually and emotionally engage aiming for something higher.

How did you choose the first production?

Why found a theater company? How did you get the idea?

I had realized over the years that we needed to find a reliable and nourishing outside source of funds. I had a lot of involvement in theater around town and do a lot of community theater, I realized that B’nai Torah meets for prayer only once a month. I looked at it and here’s a place that had about 70 seats and a stage about 12 deep by 26 wide which is not bad, had an adjacent parking lot that could hold about 40 cars and the theater sign started flashing in my head. I went to the board and made my proposal and they agreed.

What’s the next production going to be?

We haven’t decided or even talked about what the next offering will be but it will be sometime in the spring and it will have a Jewish theme of some kind. “The Sunshine Boys” is like that. It’s not a Jewish play but yet the syntax and the dialogue give it that flavor.

Will all the plays be Judaic in nature?

Not necessarily but they will be related to themes that are Jewish themes.

How many people are helping with the production?

We have about seven actors. We also have people making the sets and dealing with the lighting and sound so . . . we have about a dozen people involved.

Are they all from B’nai Torah?

No. I’m the one involved in B’nai Torah. None of the rest is. They are not all Jewish, either. A number of local community theater people decided this is a worthwhile effort to put their energy towards, to raise some money and raise some visibility for this small synagogue.

Any special challenges doing this in a synagogue?

The theater is the same space as B’nai Torah uses for its religious programs. The stage is the bimah. After our fourth performance, we break everything down and put it in the back so (B’nai Torah) can have a Friday night Simchat Torah service, a Saturday morning bat mitzvah and when that’s done, we quickly will take and bring out our set again. We’ve designed our set with respect for what’s on the bimah. We cover but never move or touch the Ark.

How often will you produce a new show?

We’re planning on doing it twice a year. Not to be ambitious but perhaps by next March or so.

Tell me about your own background.

I’m actually a retired radiation physicist. I worked for many years in radiation/oncology/radiology at Barnes Hospital, but theater has always been a big hobby of mine. I first got involved here in 1993. I played Tevye in “Fiddler on the Roof” at the JCCA. A couple of years later I played in “Man of La Mancha” at Lindenwood. Over the last 17 or 18 years I’ve been in about 20 productions. Most of them have been with St. Charles Community College.

At 31 families, (B’nai Torah) isn’t rolling in dough. I wanted to do something that would increase our visibility in the Jewish community and also to present B’nai Torah with a powerful educational tool for teaching members and non-members about things Jewish.