Presidential couple: Husband and wife are current board leaders of their respective shuls 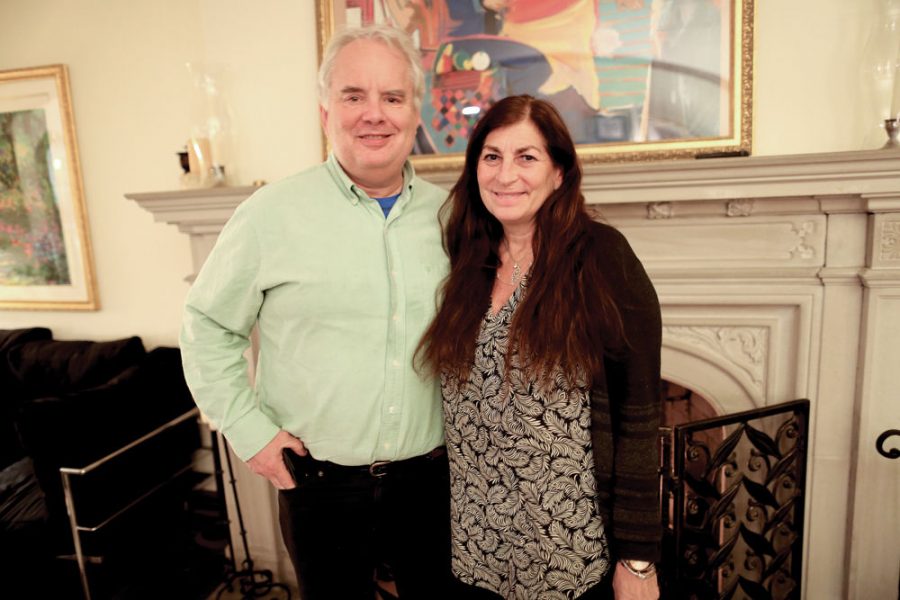 The board presidents of Bais Abraham Congregation and Kol Rinah meet regularly to discuss a variety of subjects: supporting the Jewish community, governing an Orthodox synagogue. . . and whose turn it is to take out the trash.

That’s because they are husband and wife.

Randi Mozenter, the president of Kol Rinah, and her husband Larry Friedman, the president of Bais Abe, are both longtime members of their respective synagogues. They view their dual roles as an important part of creating a strong Jewish St. Louis region. It’s also part of their nature to volunteer.

“I think both of us are building a community of philanthropy,” Mozenter said. “We’re building something really important for the next generation of Jews. And we’re solidifying an identity at a time where it’s really hard to do that.”

Friedman has a similar vision of his role as a volunteer. He said service to the Jewish community is carrying on a family tradition.

“My family has always lived in St. Louis,” Friedman said. “My great-grandfather was the head of a landsmanshaft. My great uncle was on the board of Chevra Kadisha. My older brother was bar mitzvahed in 1966 in the building where Bais Abe is now. So I have an affinity for the some of these institutions and I like the idea of helping them continue into the next generation, because I think it’s important.”

How unusual is a married pair of congregation presidents? Rabbi Harold J.  Berman, executive director of the National Council of Synagogues, said it is a rarity.

“I have to say that I have only known very few families in which husbands and wives belong to different congregations, and I have never heard of one in which they are both presidents of their respective synagogues,” Berman said.

A 2018 Orthodox Union survey of synagogue presidents showed 87 percent accepted the position because they felt a sense of responsibility. That is clearly the case for Mozenter and Friedman. They also both have some of the unique skills needed for the positions.

“I think we each bring maybe a slightly different palette or mix of things to the jobs,” Mozenter said. “It’s funny because we have very different personalities, but a lot of our core characteristics are very similar.”

According to Friedman, “We each handle stress very well. And we’re able to be very patient and tolerant. Randi inspires confidence, and she’s very passionate. She’s also very detail-oriented and well organized.”

Mozenter described her husband as the ideal leader of a congregation.

“He is brilliant with big picture things,” she said. “He’s phenomenal with people. He really can look at an institution and see what’s needed and to see how to help it grow. And everyone loves him.”

That could explain Friedman’s tenure on the Bais Abe board. He’s served the organization as a volunteer for more than 25 years and is currently in his second tour as president. Friedman was board president from 1998 through 2007 and he is now in his 10th year in the role.

“Simply the fact that Larry seems to know everyone in the St. Louis Jewish community and can tell me exactly what their connection is to Bais Abe is useful,” Silberstein said. “But he also knows the individual members and lay leaders of Bais Abe very well, as well as the history of the shul. Larry is really good at talking to people and building relationships. His positive attitude and sense of humor make him someone people are excited to work with.

“He has an ability to keep things in perspective, taking the little crises that come up every day in the life of a synagogue in stride without getting too worked up,” Silberstein added. “He also has an ability to recognize every person’s strengths, which allows him to empower others to successfully take on leadership roles, which is really the primary job of a good shul president.”

Mozenter, 61, was born in Philadelphia and grew up in a rural community in New Jersey. Her father, Stan, opened a clothing store there and was an exceptional salesman. She remembers that a customer once admired Stan’s shirt and wanted one just like it. There were no more in stock, so her father literally gave the man the shirt off his back. That gesture helped cement a regular, repeat customer.

While she built a successful career, Mozenter also raised a family. She was married for nearly 23 years to Joel Wexelman, who died in 2009 after battling lung cancer. Eventually, Mozenter gave JDate a try. The first match turned out to be a winner—Larry Friedman, who was divorced.

Their initial phone conversation lasted well over an hour during which Friedman offered up his life history. It was a sort of reverse deposition for the expert litigator. The two hit it off immediately and as happens in the insular St. Louis community, Friedman and Mozenter learned they knew many of the same people. Jewish geography came in handy for two middle-aged professionals who were new to the world of online dating.

Friedman, 64, graduated from Parkway North High School. He graduated from Columbia College in New York with a degree in comparative literature. He then earned his law degree from Columbia College and an MPA (Master of Public Administration) degreefrom Princeton. Friedman served as a law clerk for Irving Kaufman on the Second Circuit Court of Appeals in New York. He is now a partner at Thompson Coburn where he specializes in business, corporate and fiduciary duty litigation.

Before Friedman met Mozenter, he was already serving Bais Abe as board president. Therefore, she relies on his experience when a knotty problem comes up.

“It’s just an incredible resource to have someone that really understands the challenges and the opportunities of the position,” she said.

There were certainly big decisions for her to weigh in on soon after Mozenter assumed the role. Kol Rinah was in the midst of a big transition four years ago. Mozenter was vice president of personnel on the congregation board when Senior Rabbi Noah Arnow was hired, and she was president when another young rabbi (Scott Shafrin) was hired to transform the religious school experience. The congregation leadership also signed off on a major change—moving to a new building.

Mozenter is a dedicated volunteer and has even adjusted her work schedule to make sure she is present and available at Kol Rinah. Her focus on the future of the congregation is especially important during the evolution of the organization, according to Arnow.

“Randi has been unbelievably focused on our building project, dealing with so many details and issues,” Arnow said. “She works tirelessly and virtually every single day on behalf of Kol Rinah and does so much behind the scenes to make sure everything runs smoothly.”

Kol Rinah Associate Rabbi Scott Shafrin echoed Arnow’s assessment of Mozenter, referring to both her and Friedman as “mensches who give tirelessly to their families, friends and the Jewish community.”

“Randi’s leadership of the synagogue has been phenomenal,” Shafrin said. “She truly and wholeheartedly cares about people. She adds personal touches to everything, whether it’s calling or visiting someone who is ill or needs help, making sure to check in with individuals or families needing help or recovering from a loss, or just lending a helping hand on a Shabbat morning or a synagogue program, Randi invests so much of her heart in this community. Since I have been here, she has steadfastly supported my growth as a rabbi and a leader.”

Her dedication to the position has definitely inspired Friedman.

“She’s been a tremendous resource and source of wisdom for me,” he said. “When she told me she was asked to take the position, I told her jokingly, ‘If you want to spend less time with me, there’s easier ways to do that than being president of the synagogue.’”

There is a clear mutual admiration between the president-spouses. Said Mozenter: “I think we help each other. When I come home from a meeting, Larry always says, ‘How was it—I’m sure you were great.’ And that’s followed by ‘What can I help with?’ That’s really helpful having someone to problem-solve with.”

As if working fulltime and putting in lengthy hours for their respective synagogues weren’t enough, the couple volunteers for other organizations, too. Friedman has served on the boards of the Eighth Circuit Bar Association and Epstein Hebrew Academy. He is currently a board member of the Jewish Community Relations Council, a post he’s held for six years. According to Maharat Rori Picker Neiss, JCRC executive director, Friedman’s volunteer efforts make a significant impact in the community.

“He has been a tireless advocate for our work, thinking critically about the issues facing the St. Louis region and the role of the Jewish community in being on the front lines of responding to those needs,” Picker Neiss said. “Larry is open to hearing a multitude of voices and incorporates massive amount of information before making decisions. He recognizes that the role of community work is not just about the results, but about the process in which we get there, and how we get there together.”

Like Friedman, Mozenter has volunteered for multiple organizations. She serves on the boards of Jewish Student Union and the Washington University Neighbors’ Council. She also was a member of the executive board of Kids In The Middle for five years, including two years as president. Additionally, she was a Jewish Federation Millstone Fellow.

Mozenter and Friedman are both energetic and eager for new challenges. They are empty-nesters with adult children who have lives and families of their own. When pressed as to why they put in a significant amount of time volunteering, Mozenter said they get a great deal of satisfaction out of the experience.

They put in the effort for purely altruistic reasons, without expecting any special commendations. However, when Friedman was asked to take on the board president position for the second time creating a unique husband-and-wife board president combination, Mozenter came up with one possible positive outcome.

“The first thing I said was, ‘Maybe we can get a Jewish Light story out of this!’”