Photo exhibit focuses on Muslims who saved Jews during WWII 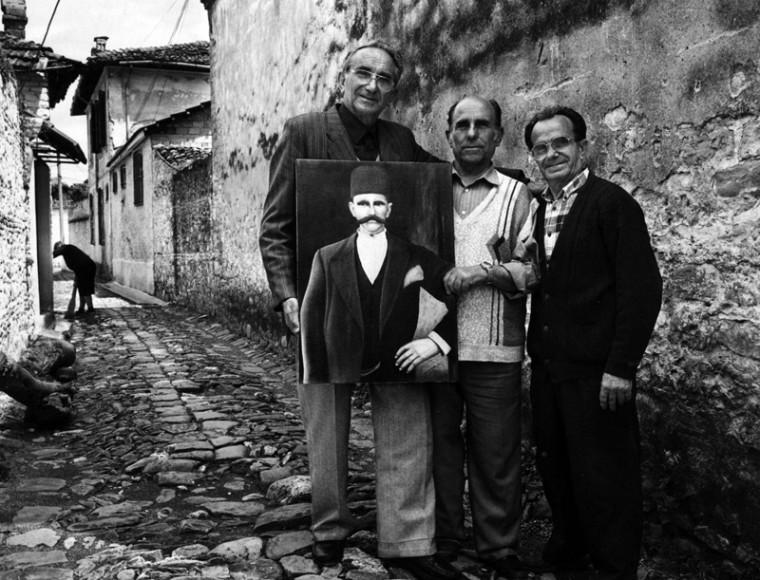 One of the images from Norman Gershman's book, “BESA: Muslims Who Saved Jews in World War II.” Images from the book are featured in a new exhibit at Temple Emanuel.

Some are smiling while others look grim. Most hold pictures of fathers, mothers, husbands – faces young and old, all captured in crisp black-and-white, as stark and frozen in history as the stories they help to tell.

There were many unusual tales of heroism to arise from WWII but that of Albanian Muslims who helped Jewish families during one of history’s darkest moments may be among the least well-known.

“Given the tension [today], it’s a teachable moment,” said David Sherman, president of Temple Emanuel at 12166 Conway Road. “These people had no obligation to the Jews and put themselves and their families at risk to protect us during WWII.”

Sherman’s synagogue will be hosting a showing of 31 photos that tell that incredible story from the book “BESA: Muslims Who Saved Jews in World War II.” Featuring the photography of Norman Gershman, the work’s title refers to an ancient Albanian code of honor that compelled residents of the small Eastern European nation to help those in danger. Thousands of Jews were sheltered in Albania, the population of which is 70 percent Muslim, according to the CIA World Factbook. In fact, despite Nazi occupation, the tiny Adriatic state became the only European country to gain Jewish population during the war, said Stuart Huck, Gershman’s colleague who worked on the technical end of the photography project.

“When I tell people I’ve been photographing Muslims who saved Jews during WWII, their jaw drops,” he said. “They can’t believe this happened. It’s important for people to know that there was and is a culture like this in Albania.”

Huck will speak at an invitation-only cocktail reception kicking off the BESA exhibit the Wednesday evening, Oct. 20. Hosted by the temple and sponsored by the Jewish Community Relations Council, the Islamic Foundation of Greater St. Louis, the Holocaust Museum and Learning Center and the Brodsky Jewish Community Library, BESA will be on display the following day with the exhibit running through Dec. 1.

A panel discussion including representatives from the three major monotheistic faiths is set for 7 p.m., Thursday, Nov. 18 to further illuminate the topic.

Huck said that the project began when Gershman received a mailing from the Jewish Foundation for the Righteous and noticed the poor photography. Referred to Yad Vashem, the Israeli Holocaust memorial, he began offering his photography services. Though denied at first, his persistence paid off and Gershman was finally off to Albania to meet with what records said were 30-35 families.

“The week before we left, we got a list from the head of the Albanian-Israeli Friendship Association with a list of 150 families on it,” recalled Huck. “We were immediately aware that this was a much bigger story than what we had anticipated.”

But one that was no less moving. Huck and Gershman discovered that the besa code of honor resulted in the sheltering of many families, generally without recompense.

“Jews were literally knocking on doors saying ‘can you help me?'” Huck said. “In every case, that door was opened and they were invited in. Most importantly, they were always treated as honored guests.”

Sherman said he eventually hopes to bring in tours of school children to see the photos. Dan Reich, curator for co-sponsor HMLC, said the showing is a chance for people to understand an aspect of the Shoah that has not been well-publicized.

“It’s really wonderful and a unique opportunity to shine a light on those who rescued others, in this case the actions of the Albanian Muslim community during the Holocaust,” he said.

Rena Abrams, a member of Temple Emanuel, said she thinks the community will find the upcoming event a rewarding experience. For her, there is an even more personal connection. While not Muslim, her Albanian grandmother’s family helped to save Jews in Greece during the war.

“I’m really looking forward to everyone enjoying the exhibit and reading the stories of these people who risked their lives as my grandparents did to save the life of a Jewish family or individual,” she said.