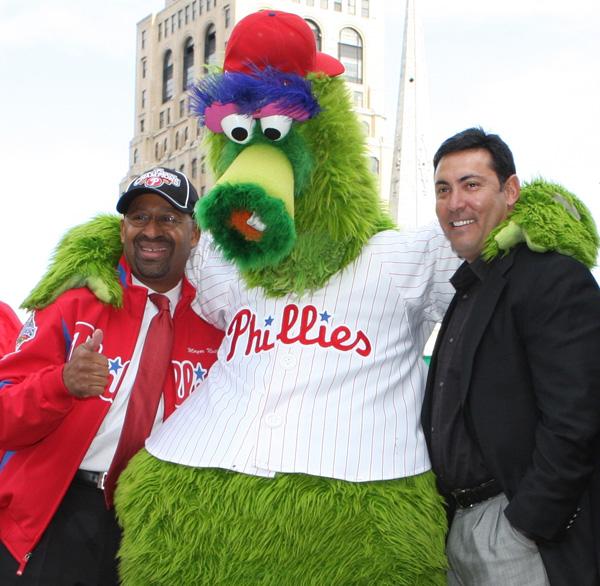 Ruben Amaro Jr., right, the general manager of the Philadelphia Phillies, joins Mayor Michael Nutter and the team's mascot at a pep rally in Philadelphia during the playoffs in 2009.

PHILADELPHIA — The son and grandson of professional baseball players, Ruben Amaro Jr. was as good a candidate as any to become a baseball lifer. Yet soccer was actually his “first love” as a kid, and he was good enough at the sport to qualify for a youth team traveling to play in Germany.

But his Jewish mom nixed the idea — for Holocaust-related reasons.

To whatever degree that decision helped steer Amaro toward the family business, Philadelphia fans should be thankful.

In a decade as assistant general manager of the Phillies, he helped build a squad that would win the 2008 World Series — only the second championship in the team’s 126-year history. Days later he was promoted to general manager, a perch he has used to orchestrate a string of high-profile trades and signings that have the Phillies, historically baseball’s losingest franchise, looking like a dynasty rather than a one-year wonder.

In 2009, Amaro’s first as general manager, the team made it back to the World Series, losing to the New York Yankees. This season the Phillies finished the regular season with the best record in the big leagues and are well positioned, as the playoffs kick off this week, to become the first National League team since the St. Louis Cardinals in 1944 to reach three straight World Series.

“A lot of my friends said, ‘Did you have to get the job after you won the World Series?’ ” Amaro joked in a recent interview with JTA. “It was a tough act to follow.”

Amaro was new to the job, but not the sport. He has spent the majority of his 45 years in and around baseball — ultimately not a surprise given that his father, Ruben Amaro Sr., spent 11 seasons in the majors, including six with the Phillies, and his grandfather, Santos, was a Cuba-born legend who starred in the Mexican Leagues in the 1940s.

Amaro Sr. would marry Judy Herman, a Jewish girl from Philadelphia in the early 1960s, and stick around the Phils’ organization long enough to acquire a World Series ring as first base coach in 1980 — Amaro Jr. was one of the batboys. He went on to star at Stanford University, helping the school win the College World Series in 1987.

After eight seasons in the majors, including five with the Phils — and a trip to the 1993 World Series, which the team lost — he was offered the assistant GM job in 1999.

“Its funny,” Amaro said. “When I was little, I wanted to be a doctor or veterinarian. Soccer was actually my first love.”

“We had a very diversified family,” he said, referring to his Jewish mother and Catholic-Hispanic father. “We did Passover, Yom Kippur, Chanukah. We were exposed to both faiths pretty equally.”

Growing up in northeast Philadelphia, Amaro never had a bar mitzvah. But, he recalled, “I had a lot of friends who were bar mitzvahed and went to a lot of them.”

Though his wife is Catholic and raising their children in that faith, Amaro said that “We go to seders all the time. For the New Year we were hanging with my Aunt Linda.”

What does he love most about the Jewish religion?

Turning serious, he adds, “I think in the Jewish faith there’s an emphasis on family, and the closeness of the family is something that really appeals to me.”

Just a few months after becoming general manager of the Phillies, Amaro was inducted into the Philadelphia Jewish Sports Hall of Fame. At the ceremony, Amaro’s mother, Judy Amaro Perez, recalled the memory of her own mother, saying she would have been quite proud of her grandson.

“Many a seder did we have at her house, and Ruben was included,” she said.

In explaining the selection, the organization’s director, Debbie Weiss, told The Jewish Exponent that the Hall of Fame was not in the business of  imposing a litmus test for Judaism or being Jewish. Instead, she said, what the organization was most looking for was integrity.

“It’s someone with integrity and values that are consistent with Jewish values,” Weiss said.

If performance is a measure, Amaro has lived up to the honor.

Shortly after taking the reins, Amaro would make the first of several great moves, letting longtime left fielder Pat Burrell walk as a free agent and replacing him with Raul Ibanez, who would carry the team with his bat for the first two months of the 2009 season.

His biggest successes, however, have involved bringing top-flight hurlers to town.

In 2009, with the pitching staff struggling, Amaro signed 37-year-old Pedro Martinez. He pitched well, but the bigger move came soon after, on July 29. After being rebuffed in his attempt to acquire Roy Halladay — perhaps the best pitcher in baseball — from Toronto, Amaro outmaneuvered a number of veteran GMs to land the 2008 American League Cy Young Award winner, Cliff Lee, in a trade with Cleveland for four prospects.

Lee’s spectacular debut in San Francisco two days later and stellar showing the next two months was surpassed only by a near perfect postseason, where he went 4-0, and became a certified Yankee killer, winning games 1 and 5 of the World Series. But the Yankees still managed to dethrone the Phillies in six games.

Reaching the World Series “was gratifying, yet disappointing,” Amaro said. “We didn’t play very good baseball against the Yankees.”

Amaro had more big decisions to make in the offseason. Six weeks after Lee’s World Series domination, the Phillies sent him to Seattle for three prospects. The same day, he traded three other prospects to Toronto for Halladay, the pitcher he had really coveted that summer.

“We loved Cliff Lee,” the Phillies GM said, “but we only had him under control for one more year” before he would become a free agent. “If we were going to be able to obtain a No. 1 starter and had a chance to keep him for several years, then we oughta give ourselves a chance to do it.”

The Phils immediately signed Halladay to a three-year extension, and the right-hander was dominant from the start of the season. But Amaro would spend the next several months fending off critics who wondered why the Phils couldn’t have kept Lee along with Halladay.

The team got off to a hot start in 2010, but cooled due to a host of injuries. By mid-July, in third place and barely above .500, Amaro began looking for another starting pitcher. One year to the day that he had managed to pry Lee from Cleveland, Amaro outbid several contenders for Houston’s Roy Oswalt.

“We had a lot of internal discussions about doing a number of things,” Amaro said, including “breaking up the club.”

“We felt if we were gonna make any move, it would have to really move us forward.”

The trade has been a home run: Since arriving in Philadelphia, Oswalt is 7-1 with a 1.65 ERA.

For those keeping score, that’s three times in a row that Amaro outmaneuvered the rest of his colleagues to acquire the best starting pitcher on the market.

With Halladay and Oswalt leading the way, it’s been Roy Vey for the rest of the league. The Phillies finished the season with a 49-19 stretch run that produced their fourth straight division title and the best record in baseball.

The defending NL champs were slated to open their best-of-5 playoff series with the Cincinnati Reds on Wednesday. How confident is the GM?