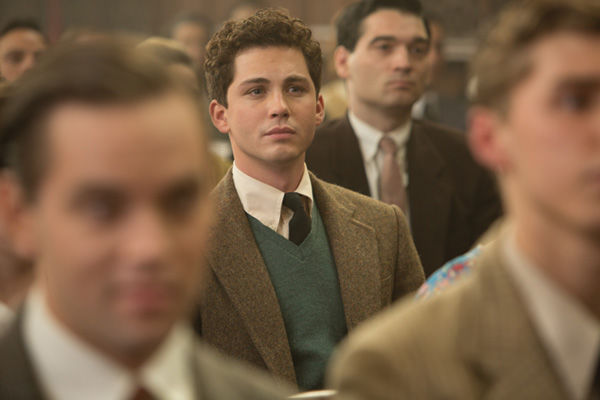 Logan Lerman in a scene from “Indignation,” a film adaptation of the Philip Roth novel. Photo: Alison Cohen Rosa

Philip Roth’s more than 30 novels have earned him every literary award except the Nobel Prize in Literature but have rarely served as the basis of successful films. “Goodbye Columbus” was a commercial success and entertaining, but  “Portnoy’s Complaint,” Roth’s outrageous ode to onanism, came across as merely crude and clunky onscreen.

“Indignation,” based on Roth’s slim 2008 novel, is a true exception. Writer-director James Schamus, who captures the quiet but anxious tone of Roth’s novel, and actor Logan Lerman, who is superb as protagonist Marcus Messner, succeed admirably in telling this moving story.

It’s 1951, just before the uptight Eisenhower years and the cultural and sexual revolutions of the next two decades. Marcus, an intellectually brilliant but socially and sexually naive Jewish boy from Newark, N.J. (Roth’s birthplace), enrolls in a small conservative college in Winesburg, Ohio (a Rothian nod to Sherwood Anderson’s stories of mid-America). In doing so, he leaves behind a middle-class Jewish home where his kosher butcher father (a credible Danny Burstein) seems to be losing his mind to what today might be called dementia.

There is urgency about Marcus’ decision to enroll at Winesburg College. It is the peak of the Korean War and, without a student deferment, Marcus could be sent to his death. Indeed, one of his classmates is killed in action.

Marcus, while ethnically Jewish in every respect, considers himself an atheist and rebels strongly against the college’s required chapel attendance. His intellectual hero is Bertrand Russell, a Nobel Laureate whose famous essay, “Why I am not a Christian,” won him both acclaim and disdain.

A run-in with his Jewish roommates leads to his transfer to an isolated single room, the least desirable in the campus dorms, and contributes to his ongoing arguments with Dean Caudwell (a magnificent performance by Tracy Letts).

Caudwell represents everything parochial and stubborn about middle-class values at midcentury in the Midwest. He is just as stubbornly committed to his narrow-minded provincialism as Marcus is to his intellectually open-world view.

Marcus carries his Jewishness with him like a tight-fitting sport coat. He wants to be the dutiful “good Jewish boy,” make good grades and stay out of trouble — and not be drafted. But his plans are disrupted when he becomes infatuated with a beautiful, sexually forward, non-Jewish coed named Olivia Hutton (Sarah Gadon), who proves to be much more complicated and conflicted than she first appears.

As is the case in many of Roth’s later novels, there is an almost Greek tragedy quality about the plight of Marcus. If he dropped out of Winesburg in a dispute with the imposing dean, he could be drafted and sent to Korea  If he stayed at school and continued his relationship with Olivia, it could cause great heartache for his mother (Linda Emond), who disapproves of the emotionally unstable girl.

As the moving parts of the story converge, a growing sense of dread and entrapment envelops the viewer. First-time director Schamus does an amazing job telling a poignant story rife with terrific, fleshed-out performances.

“Indignation” is the best screen adaptation of any of Roth’s novels. It deserves to be seen more than once so that its true impact can sink in.