‘Pastrami on Rye’ is a tasty portion of deli history 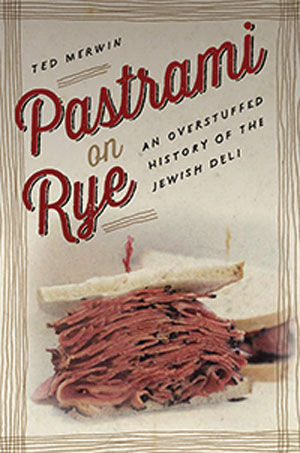 With apologies to Charles Dickens, Ted Merwin’s book, “Pastrami on Rye: An Overstuffed History of the Jewish Deli,” might well be described as the best of times and the wurst of times.

In fact, Merwin, an associate professor of religion and Judaic studies at Dickinson College in Pennsylvania, has produced a well-documented, well-written culinary and cultural history of the Jewish delicatessen in America.

Although Merwin’s research indicates that there were delicatessens in the United States before the American Revolution, the first real influx of what were actually called delicatessens began when German and other Central Europeans migrated to New York and opened such establishments.  Most of these early delicatessens were located on New York City’s Lower East Side and were operated by various ethnic groups, including the French.

According to Merwin, the Jewish delicatessen was an outgrowth of kosher butcher shops.  In addition to selling uncooked meat, these shops also sold prepared foods, including pickled meats, frankfurters on hooks, and even canned beans and soup, ketchup and crackers.

Eventually, as kosher delis developed, they also began to sell meats, which could be sliced hot, with frankfurters and potato knishes cooked on a grill in the window.

Merlin writes that these delicatessens served other purposes.  They provided take-out service for the Jewish immigrant, especially the early 20th-century woman who spent much time preparing family meals.  The delicatessens also became gathering places for Jewish immigrants who made them the cultural and culinary center of New York Jewish life.

In 1888, Katz’s opened as the first “true” Jewish deli in New York.  Soon it was joined by others on the Lower East Side and throughout the city.  The increasing number of Jewish delicatessens gave rise to the growth of kosher sausage companies.  Among the largest were Sinai Kosher and Oscherwitz, both founded in the late 19th century; Hebrew National, founded in 1905; and Zion Kosher, which emerged in the years after World War I.

After discussing the rise of the delis outside New York in places such as Los Angeles and southern Florida, Merwin outlines the factors that led to the deli’s decline.  These include the attraction of other ethnic cuisine, especially Italian and Chinese food, and the Jewish movement to the suburbs where there were no kosher butchers and where synagogues were sparse.

Merwin also maintains that the younger generations tended to downplay their Jewish ethnicity and culture and instead developed a more “sophisticated” taste in food.  If they wanted a “deli” sandwich, there was a supermarket delicatessen counter available nearby.  By 1960, supermarkets sold 70 percent of the nation’s groceries, including deli products.

Finally, there was a rapid decline in the number of Jews who kept kosher or who wanted to be seen eating in a kosher establishment.  Most of the new delis after the 1960s were kosher-style, where traditional Jewish foods were served but the meat was not kosher.

Merwin claims that the final cause of the demise of the Jewish deli was the resurgence of Orthodox Judaism.  Unless a delicatessen was Glatt kosher, which meant it adhered to the most rigid Orthodox standards, including closing on the Jewish Sabbath and holidays, Orthodox Jews would not patronize it.

Merwin concludes that by the beginning of the 21st century, Jews had turned their backs on their own style of cooking, going so far as to identifying it as “unhealthy, low class and unappetizing.”  Merwin contends, however, that as long as there are both Jews and non-Jews who will continue to eat “traditional” Jewish food, delis will still stay alive in our culture, but he doubts that they will ever regain the importance they once held in the Jewish community.

Merwin has set out to trace the rise and fall of the delicatessen in American Jewish culture, using this analysis to help us understand the American-immigrant experience.  He has been more than successful.  By meticulous and thorough research, Merwin has shown that in the postwar migration to the suburbs, city neighborhoods fragmented and delis closed.

Merwin’s book contains fewer than 200 pages of text, yet the research and writing required more than 10 years.  That seems hard to believe until one realizes that there are more than 40 pages of footnotes and bibliography and that some text pages contain more than 10 footnotes.  Merwin’s research is meticulous, to say the least.

The result is an extremely readable book, rich in nostalgia, and recommended for both its historical background and current relevance.

Here’s a suggestion though: Prior to reading, place two pieces of rye bread on a plate, smear them with brown deli mustard, and heap hot pastrami between the slices.  Then add coleslaw, two or three crisp, green pickles, and finally a large glass of Dr. Brown’s Cream Soda. Then begin the book.