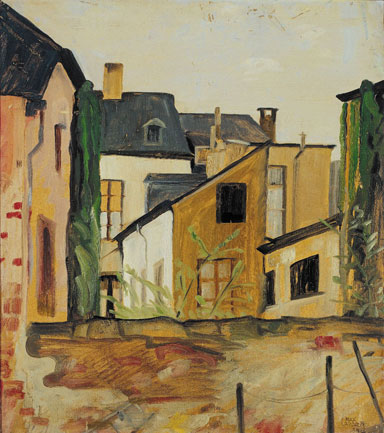 By Li Cornfeld, Special to the Light

When it comes to great artists associated with St. Louis, few people think of Max Lazarus. A celebrated painter who fled Nazi Germany, Lazarus called St. Louis home from 1938 until 1942, when he moved to Colorado to seek treatment for tuberculosis, just as he began to achieve success as an artist here. Meanwhile, in his native German city of Trier, his works were largely destroyed and his memory forgotten.

That is until now. “Max Lazarus: Trier, St. Louis, Denver: The Jewish Fate of an Artist,” curated by the City Museum of Trier, showcases his life’s work in a single exhibition for the first time. In addition to displaying paintings from every period of his life, Lazarus’ role as a premier German synagogue painter in the early part of the 20th century is impressively documented by the exhibit, despite the destruction of the synagogues that he designed. The exhibit will be on display at the Sheldon Art Galleries from Feb. 18 to May 7.

The opening of the Lazarus exhibit in Trier this past March marked the culmination of many years of a detective-like work by curator Barbara Schulte. As an art history student completing a thesis on the German artist Reinhard Heb in the mid-1990s, Schulte was surprised to hear him speak highly of an artist named Max Lazarus. An artist of exacting standards, Heb seldom praised his contemporaries, piquing Schulte’s curiosity.

Schulte’s initial research revealed that Lazarus had received immense critical success as a young artist in the early part of the 20th century. Then the rise of the Nazis intervened, preventing Lazarus from ever receiving the widespread recognition promised by his early reviews. Thus Schulte began a quest to rescue Max Lazarus from the obscurity of history – and his surviving artwork from the basements of relatives where it had been kept for decades.

While the localized art scenes of the mid-20th century forced Lazarus to begin anew with each move, the interconnectedness of today’s world has allowed Schulte to bridge the three phases of Lazarus’ life and work. Using the Internet to help locate Lazarus’ disparate relatives, in the fall of 2008 she traveled to San Fransisco, Denver, and St. Louis, combing through archives and storage spaces.

The resulting exhibition is remarkable for its comprehensive inclusion of Lazarus’ artistic development across three distinct locales. His lush landscapes of Trier depict the serenity of Western Europe in the early part of the 20th century and reveal the artist’s personal affection for his birthplace. The Expressionist cityscapes from his years in St. Louis – the exhibit includes paintings of Grand Avenue and St. Louis City Park – are a dizzying blur of color, maybe suggesting the disorientation of forced immigration. His paintings from Denver, meanwhile, show the arid cleanliness of the American southwest and its mid-century urban development.

In addition to Lazarus’ changing landscapes, the exhibit showcases portraits from each period of his life. The intimate, sensitive drawings of his fellow patients at the sanitarium where he received treatment in Colorado are particularly striking. Lazarus had honed his skills as a portrait artist while in Trier, when Nazi policy required his expulsion from the Trier Artist Guild, of which he had been a founding member. Barred from public cultural activities, he rented a private studio where he produced so-called “speed portraits.” These rapidly produced pencil sketches, filled in with watercolor, allowed paying customers to sit for just half an hour and then pick up their finished products. He was thus able to continue supporting himself as an artist, for a time, in spite of increasingly heavy restrictions against Jews.

Among the most valuable of Schulte’s discoveries include vibrant watercolor sketches and historical photographs of the eight synagogues, now destroyed, which Lazarus painted before leaving Germany. A team of experts at Darmstadt University then used that documentation to digitally recreate Langden Synagogue, designed by Lazarus in 1926 and destroyed by the Nazis in 1938. Should researchers elsewhere uncover similar documentation, one might imagine a future exhibition devoted to recreations of the destroyed synagogues of Europe. Such an exhibition could work to recuperate them from the obscurity of history, just as the Trier exhibition rescues Lazarus’ life works.

Li Cornfeld is a freelance writer who grew up in St. Louis but is now based in Brooklyn, N.Y. Max Lazarus is her second cousin, three generations removed.

What: Max Lazarus: Trier, St. Louis, Denver: The Jewish Fate of an Artist

Gallery Talk: 6 p.m. April 12, Dan Reich, Curator and Director of Education at the Holocaust Museum and Learning Center, will speak on Max Lazarus’s career as an artist in exile. Bellwether Gallery, admission free.