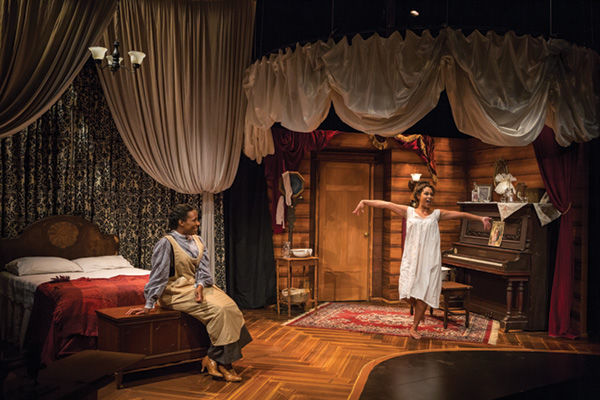 Pulitzer Prize-winning playwright Lynn Nottage is known for giving voice to stories of the disenfranchised that otherwise might be forgotten. “Intimate Apparel” certainly delivers on that, though in the capable hands of New Jewish Theatre director Gary Wayne Barker and his six-member cast, the play becomes first-rate theater as it effortlessly stitches together thoroughly affecting performances with a multi-layered drama that is equal parts tender, bittersweet and compelling.

The year is 1905 and Esther Mills (a remarkable Jacqueline Thompson, who is in most every scene) has made a life for herself in New York City, albeit a lonely one. The 35-year-old African-American seamstress lives in a boarding house where she sews beautifully crafted undergarments for clients ranging from white socialites to black prostitutes, tucking her profits into the patches of a crazy quilt she keeps at the foot of her bed. Esther dreams of the day when she will have enough money to open a beauty parlor where black women can go to feel special.

But that isn’t all Esther dreams about. Having lived in the boarding house since the age of 17, she has seen many other girls marry and move out. Her spirited landlady Mrs. Dickson (Linda Kennedy) encourages Esther to date a certain hotel employee — after all, time is running out for her to have children — but she has no interest in this “obese” man. It isn’t until she starts receiving letters from a Panama Canal laborer named George Armstrong (Chauncy Thomas) that Esther wonders if maybe, just maybe, romance could be in her future.

Despite knowing her way around a sewing machine, Esther is illiterate. When she tells this to her client Mrs. Van Buren (Julie Layton), a wealthy white woman in an unhappy marriage, she excitedly conspires with Esther to pen her letters so that Esther and George can correspond.

Also conferring with Esther is her racy friend Mayme (Andrea Purnell), a once-aspiring pianist who now sells her services to men. As the play unfolds we find out more about the concessions these women made, as well as those of Mrs. Dickson, who casts a skeptical eye on Esther’s epistolary relationship with George as it grows more serious.

If you’re scratching your head wondering what’s Jewish here, it is the other male relationship Esther has, the one with Mr. Marks (Jim Butz), a Hasidic fabric salesman. Esther is his favorite customer — he can’t help but gush when she comes around, saving special Japanese silk and Scotch wool for her and offering them at a discount. She, too, cherishes their meetings. This is a man with whom she has much in common, though the two clearly know their affection for each other can only be at a distance.

What makes “Intimate Apparel” so worthy are the people who populate it, and how we come to care about them, especially Esther. Despite describing herself as plain looking and unable to read or write, Esther is no dummy, though her desire to be loved seriously tugs at — if not overwhelms — her typical prudent nature. In Esther, Nottage has created a fully fleshed, deeply realized character, which she based on her own great-grandmother.

When “Intimate Apparel” first opened Off-Broadway in 2004, Tony Award-winner Viola Davis played the role of Esther. Let’s face it; those are some pretty big acting chops to live up to. Wisely, Thompson makes Esther her own, imbuing this pragmatic, dignified woman with enough emotional grit that by the end of the 2½-hour play, it’s all we can do not to run on stage and hug her.

The supporting cast also is rock solid. Kennedy, who seems incapable of a poor performance, sparkles as the busybody landlady, adding humor to the proceedings without compromising the nuances of her character. Layton and Purnell elevate their roles so they never fall to stereotype; both demonstrate skill in balancing their outspokenness with quiet vulnerability.

Butz is a true delight as the bashful salesman, whose heart takes flight whenever Esther comes around. The two don’t exactly exude chemistry, but there is a sweetness to their interactions that is irresistible.

Thomas captivates as George, the handsome laborer from Barbados who goes from gently wooing Esther with his letters — which he delivers in a melodic dialect under soft stage light — to unleashing his anger and frustration after he moves to New York and they instantly marry.

Barker deserves kudos for his even-handed direction, never allowing sentimentality to take over. Scenic designers Peter and Margery Spack do a masterful job compartmentalizing the stage with moving curtains that work to connect the characters as well as lend intimacy.

Although the action in “Intimate Apparel” takes place more than 100 years ago, Nottage’s beautifully scripted play, and the superb treatment it gets from NJT, reminds us that issues of economic struggle, race, religion and gender politics are still very much a part of the American landscape.