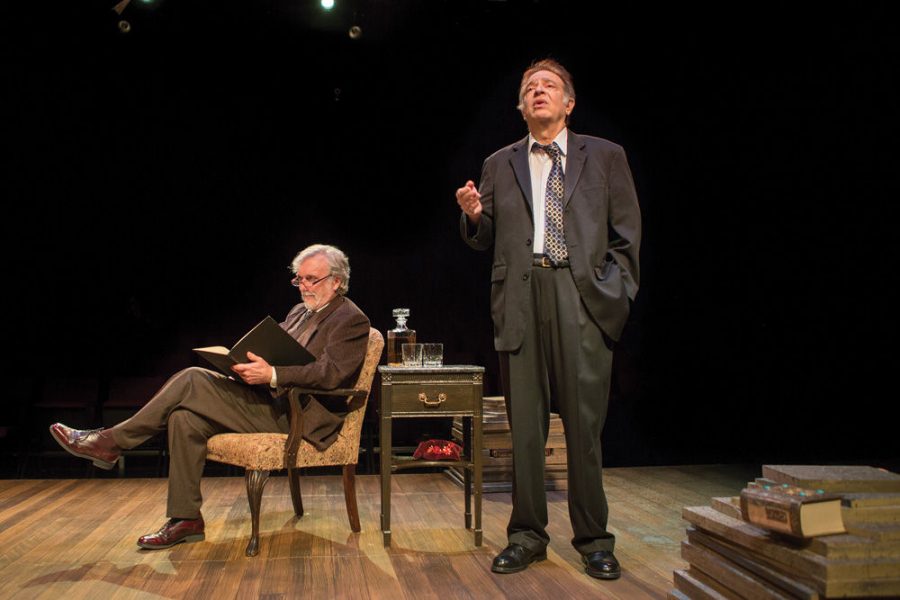 Prepare a double-entry list with the names of Jews of whom we are most proud on one side of a ledger, and Jews about whom we feel revulsion and shame on the other.

On many such lists, the names of Jonas Salk, Albert Einstein and Louis D. Brandeis would appear on the proud side, with names such as Leopold and Loeb, Bugsy Siegel and Mickey Cohen on the shame side.

Without doubt, on a more contemporary list, the name of Elie Wiesel, the Holocaust survivor, novelist and Nobel Peace Prize laureate, would appear near the top of those of whom we are most proud, while the name of convicted Ponzi schemer Bernard Madoff, whose financial criminality victimized numerous major Jewish organizations, would surely be among the “how low can you go?” short list.

Now try to imagine a conversation between Madoff, who is serving a century-plus sentence at the Federal Correctional Center in Butner, N.C., and Wiesel, whose foundation lost more than $15 million to Madoff. Such a conversation is the concept of “Imagining Madoff,”  the  New Jewish Theatre’s third production of season that runs through Feb. 8.

Playwright Deb Margolin originally intended to base the imagined conversation between Madoff and Wiesel, but the real-life Wiesel objected to being depicted in her play and even threatened legal action. So Margolin substituted a fictional character named Solomon Galkin. Like Wiesel, Galkin is a Holocaust survivor; unlike Wiesel, Galkin is a poet, not a novelist.

Though Wiesel might still object to the similarity of the Galkin’s character to his own, the play itself works powerfully to juxtapose the lives and personalities of these two larger-than-life characters, each of whom must live with a life of pain – Madoff over his destructive swindling, and Galkin with the searing memories of his Holocaust experience.

Bobby Miller delivers a strong performance as Bernie Madoff, a hard-bitten, hard-driving ubercapitalist whose greed and hubris led to his downfall. As portrayed by Miller, Madoff’s frustration and anger over the collapse of his scheme and his subsequent conviction and imprisonment is on full display, as he paces like a trapped jungle beast in his jail cell. But he also exhibits an odd affection when it comes to his wife, Ruth, who liked to be surrounded by bright colors, soft bath towels and lots of flowers.

“I don’t like flowers,” Madoff says in one of his monologues. “They’re too feminine.”

Madoff also reflects a crude insensitive streak by trying to remember the punchline in an awful “light bulb” joke involving Jews. He retains an obnoxious bravado, unfettered by the shame he should feel for his destructive breaches of trust.

Jerry Vogel is believable as Galkin, the deeply philosophical poet of the Holocaust, who tries to put into words that which is inexpressible. Galkin is seen to be a serious scholar of the Talmud, Mishna and midrash – and to be fond of consuming large amounts of whiskey in his long conversations with Madoff before he knows that he is being swindled by a man in whom he had placed his trust.

Except for the drinking, an understandable form of self-medication, Vogel’s portrayal of Galkin is quite similar to the real-life Wiesel. Even the voice, which is often so muted as to be difficult to hear, is similar to that of Wiesel, who has lectured in St. Louis numerous times over the past few decades. Of note is the fact that Madoff comments that he himself is soft-spoken, which causes people to lean in closer to hear what he is saying. They don’t realize that his muted demeanor hides a scheming and criminalized mind that causes untold damage to his clients, many of whom had been close friends.

Rounding out the cast is Julie Layton in a sharply realized depiction of the Secretary, a former trusted administrative assistant to Madoff. She describes her ex-boss as a highly private, secretive man who occasionally surprised her with questions that alternately made her feel flattered to be noticed and awkward over their personal nature.

Scenic designer and artist Kyra Bishop and her production staff deserve a special shout-out for designing a three-tier set that successfully manages to take us inside Madoff’s prison cell as well as Galkin’s warm, book-lined study. It is here where Madoff and Galkin have all-night conversations about Talmud, wondering whether biblical stories, such as Abraham’s willingness to sacrifice his son as a “test” from God, make sense.

Meanwhile, during these conversations, Galkin keeps praising Madoff as a compassionate man with a gift for finances who is providing such life-affirming advice and business management to groups such as Hadassah, the American Jewish Congress and his own charitable foundation, all of which would suffer multimillion-dollar losses. At various points during these conversations, Madoff expresses some conflicted emotions and comes close to confessing his crimes to Galkin but always fails to do so in the face of his friend’s professions of friendship and respect.

The third tier of the stage is the perch of the Secretary, where she is seated in an environment that looks like a witness stand, with a microphone slightly elevated. The Secretary is seen responding to questions being posed by the Securities and Exchange Commission, which led to the arrest, conviction and imprisonment of her infamous former boss.

In her demeanor, the Secretary goes back and forth between being self-confident and defensive, insisting that she had no knowledge criminal activity was taking place right under her nose. Her protests evoke the lame excuse by the kind of Nazi functionaries who victimized people like the fictional Galkin and the very real Wiesel: They were only following orders, and had no idea what was happening.

Tension builds in the 90-minute play, directed with skill by Lee Anne Mathews and performed with no intermission. It would be almost impossible to make up a character like Bernie Madoff, let alone juxtapose him against an iconic figure among Holocaust survivors. Margolin’s crackling script, along with well-orchestrated direction and solid acting, makes for an evening of good theater.