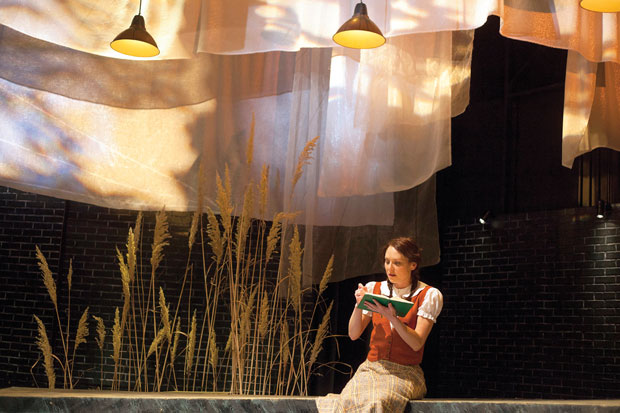 Shanara Gabrielle gives a tour-de-force performance in the lead role of the New Jewish Theatre’s production of “Hannah Senesh,” by David Schechter.  The play, which faithfully depicts the heroic and too brief life of its title character, retells the true story of Hannah Senesh (also spelled Szenes), for the last 10 years of her life, 1934 to 1944.

Senesh is a young Hungarian Jew who managed to escape from her native land just before it was fully occupied by Nazi Germany.  When she travels to pre-Israel Palestine, she leaves behind her mother, Catherine Senesh, and her beloved brother George.

The highly idealistic young woman becomes infatuated with Zionism as the pathway to survival for the doomed Jews of Europe. From Hungary, she makes her way to Palestine, and settles in Kibbutz S’dot Yam, near Caesaria.  Wanting to do more to make a difference, she volunteers to become a paratrooper for the Palmach, which links up with the British Army for dangerous rescue missions behind enemy lines in Yugoslavia.  The linkage with the British Army was intended to provide “cover” to the Jewish volunteers who helped rescue trapped British soldiers while they sought to help free Jews and bring them back to Palestine.

Tragically, as Senesh bravely attempted to cross back into Hungary, she was caught and arrested, brought back to Budapest, placed in a dank prison and put on trial for treason.

In her challenging and demanding role, Gabrielle performs with breathtaking skill, drawing not only upon her time-tested acting chops, but also her stunning acrobatic skills as an aerialist.  When she enlists in the elite paratroopers unit of the Palmach, the precursor to today’s Israel Defense Forces, she puts herself through a regimen of on-stage exercising, including perfectly executed push-ups, sit-ups and other rigorous physical training.

Gabrielle’s Senesh evolves from a feisty, mildly rebellious teenager into the mature and inspirationally brave hero of the Jewish Resistance to the Nazi horror.  She tries a popular vegetarian diet, only to give it up days later.  When she adopts Zionism, however, it becomes a lifetime commitment related to saving her fellow Jews.

Much of Schechter’s script is based on Senesh’s own brilliant poetry and on the detailed journal she kept for much of the last 10 years of her life.  Some of her most moving poems are excerpted and projected onto an on-stage screen, which also effectively visualizes Senesh’s parachute drop behind enemy lines.

One of Senesh’s most enduring poems is also a song “Eli Eli,” which is sung as a regular part of Jewish services in synagogues throughout the world.  It is sad, evocative and extremely moving.

In addition to Senesh, Gabrielle portrays Hannah’s mother, Catherine Senesh in opening and closing sequences, which bookend the play.  Gabrielle carries off the two roles with total believability, though the thickness of Catherine’s accent requires close attention so as not to miss some dialogue.

In the course of Senesh’s writings, we learn of her concerns over her inability to find a steady boyfriend. She laments that by the time she is 22 she had not yet kissed a boy.  She struggled not only with global politics and war, but with her own issues of identify and sexuality. That makes her character more accessible and less mythic.

There is only one other character in the play. Jimmy Betts has a very brief cameo role as a Nazi guard, whose shouted order for Hannah to “halt” as she attempts to cross into Hungary truly jolts the audience, which had been listening intently to the voices of only Hannah and her mother for the entire play.

Director Kat Singleton does a good job of keeping the action moving in seamless fashion. Shout-outs go to stage manager Emilee Buchheit and scenic designers and artists Peter and Margery Spack for a simple but starkly effective set that frames the action superbly.

Hannah Senesh’s life ended brutally at the hands of the very Nazis she was bravely fighting to resist.  But her life was not in vain. The script could benefit from a line or two noting that she and her colleagues were able to rescue some comrades-in-arms before they were caught.  But Schechter’s play and a brilliant performance by Shanara Gabrielle give “Hannah Senesh” the powerful dramatic retelling of her story that it richly deserves.