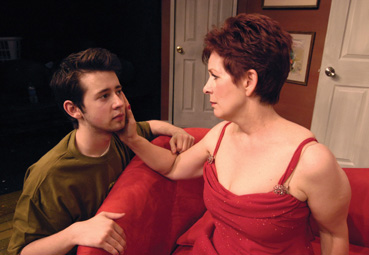 The popular therapist-author Harriet Lerner, a frequent speaker at the Greater St. Louis Jewish Book Festival, often quotes her colleague Mary Karr’s definition of a dysfunctional family: “any family with more than one person in it.” Karr’s observation truly applies to the current play at the New Jewish Theatre.

Donald Margulies, the Pulitzer Prize-winning playwright (Dinner With Friends), is the author of a by turns sad and funny family tragicomedy, What’s Wrong With This Picture?, which is the final production of the 10th season of The New Jewish Theatre of St. Louis.

Splendidly directed by the award-winning Edward Coffield, and superbly acted by an accomplished cast, What’s Wrong With This Picture? invites the audience to suspend disbelief in ghosts or agnosticism about the hereafter to accept its operating premise: that Shirley, a vibrant, restless housewife, Mom and in-law, dies suddenly when she chokes to death on some moo shu pork at a new Chinese restaurant — and because of the unfinished business in her personal life, just as suddenly returns home to her stunned husband Mort and 17-year-old son Artie just after the shiva period has ended.

Reflecting on recent personal issues of grief, director Coffield, who calls the Margulies play “sweet, amusing and peculiar,” says in the programs notes that his own losses taught him that there “were times when grieving was surprisingly funny, odd and extraordinary.” All of these emotional surprises are embedded in What’s Wrong With This Picture? as we observe the over-the-top New York Jewish family wrestle with the conflicting, overwhelming, painful and even amusing aspects of losing a loved one.

Veteran actor Alan Knoll does an outstanding job in the challening role of Mort, the suddenly widowed husband of his beloved Shirley. Truly wonderful is the portrayal of Mort and Shirley’s 17-year-old son Artie by John Kinney, who capures just the right balance between being a kid who has just lost a parent with absolutely no warning, and his Holden Caulfield-like defenses against the hypocrisy of his elders, including the rabbi, who used an inaccurate “fill-the-blanks” template for his Mom’s funeral, causing Artie to shout out his objections at the service. In the first act, in which the entire extended family at the shiva call seems grotesquely overbearing and obnoxious, only Artie, in the restrained, well-directed performance by Kinney, seems relatively “normal” and empathy-evoking.

Mort’s parents, the controlling, almost dictatorial Bella (Nancy Lewis) and Sid (Richard Lewis), and their daughter Ceil, (nice work by Liz Hopefl), whom they are neurotically anxious to help find a mate, are attempting to persuade Mort to “let go” of Shirley and move on with his life and that of his son Artie, but Mort is inconsolable and incapable of “letting go” not only of Shirley’s clothing, but of his strong love for his life’s partner.

Nancy Lewis delivers a forceful performance as Bella, who is alternately judgmental and unfeeling, caring and concerned over her son’s excessive grief. Richard Lewis as Sid, who seems almost comatose through much of the first act, and who is becoming delusional, comes to life in the complex second act and reveals long-hidden feelings he had harbored for his daughter-in-law.

Kat Singleton has the most challening role, that of Shirley herself. Kat Singleton immediately banishes any intellectual doubt one might have about whether her return from the dead is “real” in the context of the play. (If you are very literal-minded and think ghost stories are “silly,” do yourself a favor and go along with the premise; you will enjoy the play a lot more).

While the characters fret over such mundane concerns as to a missing laundry ticket for Mort’s shirts, they also confront such cosmic isues as to what life and death are all about, the fragile, complex and wonder-filled nature of all close relationships; things that are hidden and should stay hidden, and things that are revealed that perhaps are better left unsaid.

Donald Margulies’s style invites comparison to Neil Simon, whose autobiographical play Broadway Bound will open the 11th New Jewish Theatre season in October. Like Neil Simon, Margulies endows his characters with perfect timing and a limitless supply of wisecracks, although many of the laugh lines in Margulies’s work come out of leftfield, to greater effect than some of the laugh-a-minute Simon dialogue. Some may find the first act a bit too “in-your-face” as the loud, confused New York Jewish family members explode emotionally in every direction. But hang in there, because in the all-imortant second act, everything comes together with much more balance and texture. Each of us has to deal with issues of grief, loss and gratitude for remaining alive after such events. What’s Wrong With This Picture? answers its own question; when a loved one is taken from us, the “picture” of our lives is permanently changed. But our Jewish mourning customs, the integrity of our family values, and the dear memories of our loved ones can help us “let go” of their physical beings, so that their souls — and ours — can rest in peace.

What’s Wrong With This Picture? will complete its run in the studio theater at the Jewish Community Center, 2 Millstone Campus Drive, on May 20. For information or to order tickets at $18 to $25, call 3l4-442-3283.