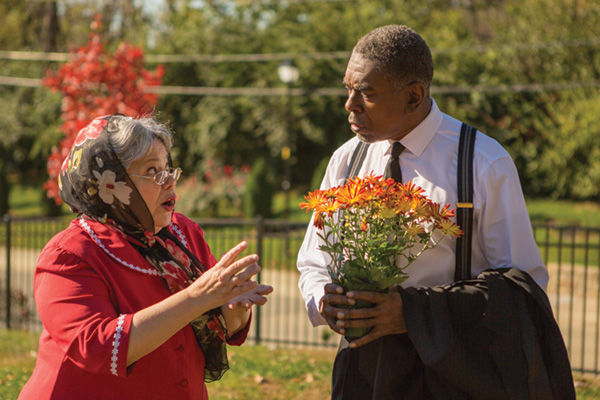 For just the third time in the history of the New Jewish Theatre, artistic director Kathleen Sitzer will step out of her office and onto the stage. Sitzer will play Daisy Werthen in Alfred Uhry’s poignant drama “Driving Miss Daisy,” the second show in the company’s 20th season.

Set in Atlanta from 1948 to 1973, the play is about the complex relationship between Daisy, a white Jewish widow, and Hoke, the African-American chauffeur who Daisy’s grown son Boolie insists she use. Daisy doesn’t want a driver, but over the years the initially difficult relationship develops into a deep friendship. In the play, Uhry also explores racism, religious prejudice and attitudes about the elderly.

“Driving Miss Daisy” opened off-Broadway in 1987 and won the Pulitzer Prize for drama in 1988. Uhry also wrote the screenplay for the movie, which came out in 1989 and starred Jessica Tandy, Morgan Freeman and Dan Aykroyd.

The play is part of Uhry’s “Atlanta Trilogy,” based on his experiences living in Atlanta as a Jew. “The Last Night of Ballyhoo” and “Parade” complete the trilogy.

Sitzer made time recently to talk about the show, her part in it and the history of NJT.

What led to your decision to play the title role?

At the beginning of the play, Daisy is 72, and I am in an appropriate age range for the role. Besides, Daisy is such a wonderful character, and the kind of character I do. When we decided to bring back the show, I just had to be Daisy.

The New Jewish Theatre first produced “Driving Miss Daisy” in the company’s 2004-05 season. What made you choose the play then?

When I read “Daisy” then, I realized just how much Jewish content is in it. Daisy is a Jewish woman — an assimilated woman, but one who retains her Jewish identity — and she berates her son Boolie about his lack of Jewish identity. Daisy also is prejudiced, but one of the beautiful things about the play is that she and Hoke develop an incredible relationship. When we closed our season with the show in 2005, we got a very interesting response.

What was that response?

Audience members told us when they had seen the play elsewhere or the movie, they’d had no idea it was a Jewish play. I think that speaks to the intimacy of our space and it also speaks to what we do: examine universal themes and issues reflected through the narrow lens of Jewish experience.

How are rehearsals going?

Very well. J. Samuel Davis plays Hoke, and Eric Dean White is Boolie, so I am being supported by two of the finest actors in St. Louis. Sydney Grosberg Ronga is directing. Still, I am a little nervous, because people will know it’s me up there on stage, and they will have a lot of expectations.

What were your past roles with NJT?

In 2001, I played Ruth in the our production of Donald Margulies “Collected Stories,” and in 2007, I was Kate in Neil Simon’s “Broadway Bound.”

When did you begin acting?

I’ve been acting since high school, and my master’s degree is in theater, though I didn’t do much of it during college. Later, I worked in community theater. Though I don’t have hundreds of shows under my belt — I’ve not had the time to do that — I do have a decent list.

What special experiences come to mind?

I did a show with the Black Rep, and I was in a Theatre Project show. I got my Actors’ Equity card back when that meant you wouldn’t work often as an actor in St. Louis.

When did the JCC get in the business of presenting theater?

There has been theater at the JCC for at least 75 years, maybe longer. The Rooftop Players was in place when the old JCC was on Union, and in the mid-’60s, an in-house troupe was called the Center Players. There was nothing Jewish about them except some of the people involved were members of the Jewish community. Later, a group called the Shalom Players produced plays in a small room in the basement here.

You came in as artistic director 20 years ago. What were your goals then, and have you achieved them?

I wanted to provide programming with a strong, clear, Jewish focus and to professionalize the program. I have achieved both goals. I’d say 20 years is a long time in the life of a small or midsize theater, and for us to have achieved this milestone is a true cause for celebration.