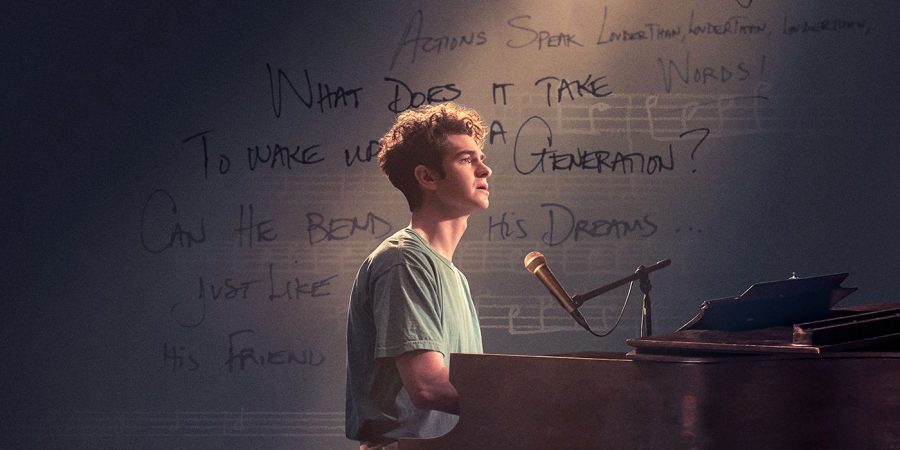 It’s almost as if Jonathan Larson knew he didn’t have a lot of time on Earth, so he spent every waking second writing. Phrases such as “art or life?” were written on notepads; the questions that seemed unanswerable brought the most passion out of him, even if the pressure never let up. A new Netflix film celebrates Jonathan Larson, and his pursuit of writing a masterpiece.
Jonathan Larson
Larson was born into a Jewish family, and could write a song about anything: the sugar dispenser at a diner or the chaos of Sunday brunch. But his heart sat next to musical theater. Too bad it was a dying art back in the early 90s, when AIDS was taking several young lives and the meter always looked low for creative types hustling and bustling their way around New York. Souls like Larson, who is struggling and poor yet revered in his Soho, N.Y. community as the film opens.
Netflix’s “Tick, Tick…BOOM!”
Larson’s goal was to write the next great musical play, a goal that he succeeded at with the renowned “Rent.” But Lin-Manual Miranda’s new film, “Tick, Tick…BOOM!” covers the 10 days leading up to Larson’s 30th birthday, a life checkpoint that he saw as the true deadline for all creatives looking to leave their mark on the world. By going back to the days where he spent eight years writing a complex sci-fi love story, Miranda and screenwriter Steven Levenson show us the genius before the world knew he was one.

That is, everyone besides Larson’s close-knit friends who believed in his genius from the very start. People like Michael (Robin de Jesus), the childhood friend who chose a life of steady paychecks instead of the artistic dream yet still supported his best friend. Alexandre Shipp’s Susan is the love in Jon’s life, a theater muse who became a close friend and girlfriend before Larson’s goals built a wall in front of their life together. Karessa (Vanessa Hudgens) and Roger (Joshua Henry) are the voices who bring his words to life yet can’t make others invest in them.
A different kind of musical
Here’s the thing. I never felt like I was watching a standard musical when “Tick, Tick, BOOM!” was playing. You don’t see 100 people swinging around a crowded Los Angeles highway or down a famous borough in New York. We see the songs come together from the sad lyrics of one man’s life, which brings us closer to those songs when performed. There may be plenty of singing here, but Miranda and company also throw an unconventional coat of paint over the usual constant song-and-dance flair, allowing the storytelling aspect of the film to be the main strength.


The Cast
The movie doesn’t work without Garfield’s go-for-broke performance. Forget everything he’s done before because Larson stands above them all. Carrying a head of hair that looks like tiny antennas stuffed with numerous ideas, Garfield’s dedication to the material and the role makes this movie truly something special to behold. He makes you believe in Larson’s words and fall in love with his ideas. Unlike “The Eyes of Tammy Faye,” where he was overshadowed by Jessica Chastain, “Tick, Tick…BOOM!” lives and breathes on his ability to make us both love and revere Larson.

Out of the supporting cast, de Jesus leaves the biggest dent. Playing the flip side of the artist coin– the one who goes into advertising and abandons the theater– he shares some of the movie’s best scenes with Garfield. There’s something tragically earnest about his Michael, a typecast and disillusioned minority in a sea of dreamers. Judith Light’s agent and Bradley Whitford’s playwright steal scenes of their own.
‘Rent’ fans beware
If you know Larson’s story, the viewing pleasure for Miranda’s film may be altered. Due to my reluctance to the musical genre of film, I knew very little about him, which only made the reality hit harder. After all, art is a singular experience, something that he took to heart with each of his projects. How to make something accessible to the world that is both personal and unlike anything that’s come before?

Larson conquered that mountain with “Rent,” which he wrote shortly after completing “Tick, Tick…BOOM!”  Lin-Manual Miranda and Andrew Garfield conquered it with this movie about his life: creating a musical that doesn’t function exactly like most musicals, yet still captures the heart of the artistic endeavor.

You can enter this inspiring movie into multiple award races. It’s terrific. Proof that some people don’t get a lot of time on this rock but what they decide to do with the days and nights could reverberate for decades.