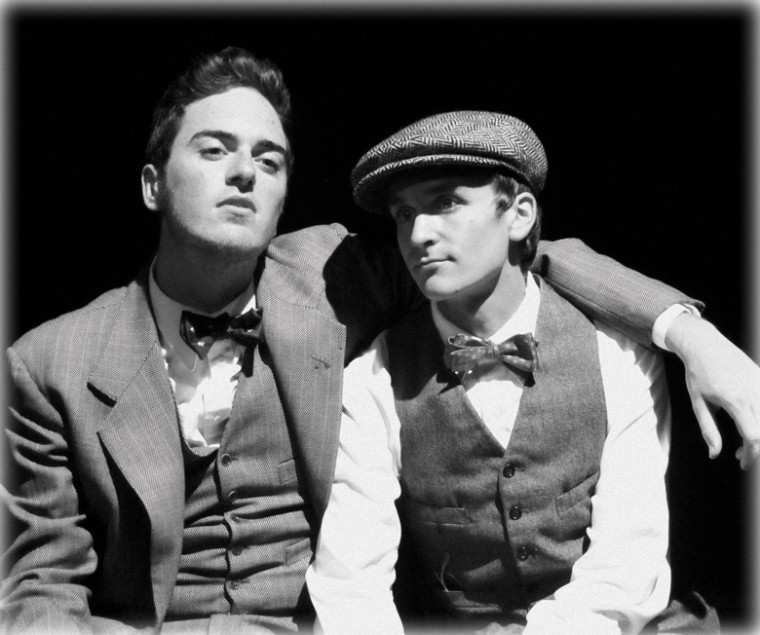 Blake Berry Davy as Richard Loeb and James Bleecker as Nathan Leopold in ‘Thrill Me: The Leopold & Loeb Story.'

In 1924, in the tony Hyde Park section of Chicago, two wealthy Jewish college students, Richard Loeb and Nathan Leopold, said to have IQ scores in excess of 200, were infatuated with Nietzche’s concept of the “Supermen,” the idea that highly gifted people are “above” the laws designed for ordinary humans. To prove their loyalty to the concept, these two honor students who were about to enter law school at the University of Chicago, conspired to commit the “perfect crime,” kidnapping and killing Bobby Franks, the young child of another wealthy Jewish family in their neighborhood.

The crime was far from perfect and a series of blunders, including leaving a pair of spectacles near the culvert where they hid the victim’s body and typing a ransom note on an easily traceable typewriter, led to their arrest.

Starting this week, “Thrill Me: The Leopold & Loeb Story,” an original musical based on the infamous kidnap-murder case will have its St. Louis premiere under the auspices of Max & Louie Productions.

Stephen Dolginoff wrote the book, music and lyrics for “Thrill Me,” which has been presented in over 50 other cities worldwide since its premiere Off-Broadway in 2005. The St. Louis production will be directed by Brooke Edwards, a Kevin Kline Award winner and a founder of the Orange Girls. The two-character production stars Blake Berry Davy as Richard Loeb and James Bleecker as Nathan Leopold, both musical theater students at Western Illinois University.

In real life, Loeb was stabbed to death by a fellow prisoner in 1936, while Leopold, who was on good behavior during his entire incarceration, was paroled in 1958 and served as a medical assistant at a Puerto Rican Hospital after his release. He died of natural causes a few years later.

The play, which draws extensively from Leopold’s 1958 parole hearing transcript, focuses on the complex and obsessive relationship between the two young kidnap-murderers, with references back to the events and decisions that led to their bungled “crime of the century.” Legendary attorney Clarence Darrow was able to spare the two from the death penalty, but the case itself not only shocked the nation at large but also truly traumatized the American Jewish community since both the perpetrators and the victim were from wealthy Jewish families.

Dolginoff said he wrote “Thrill Me” because he was always interested in doing a true crime story, and also wanted to write a small musical about a very intense relationship between two people. “I came across the story of Leopold & Loeb and realized that both of my ideas could make one great musical,” he said.

He went on to explain that “Thrill Me” is essentially a story about the relationship between Nathan and Richard. “The crime is part of the plot, but is not the main focus of the story,” he added.

With respect to how Jewish audiences and critics have responded to the show, Dolginoff said, “I have found the Jewish community to be very supportive of ‘Thrill Me.’ I have been lucky enough to have met a few people who knew Nathan Leopold and they found the work to be very respectful of the memory of him.”

Edwards acknowledged that directing a musical with such a grisly crime as its subject matter caused some challenges.

“One of the biggest is to make the characters likable or empathetic in some way to the audience,” she said. “Yes, they committed a horrific crime, but you want the audience to learn something and care about these boys.”

She also noted how important it is for the actors portraying Leopold and Loeb, whose relationship has been described as homo-erotic, to have the right chemistry.

“It is a two-man musical and they are both onstage the entire time together,” she said. “If there is no chemistry, there is no show.

“There is a lot of trust between these two actors. Leopold and Loeb had a very complicated, intense relationship and it is the actors’ abilities to create that relationship that makes the story and that takes chemistry. And these boys have it.”

James Bleecker, who plays Nathan Leopold, the more “submissive” of the duo, said of his portrayal, “It would be easy to make Nathan a ‘whiner’ as he does become rather obsequious to Richard’s demands. Though, knowing Nathan’s brilliance, and his sincere affection towards Richard, allows me a chance to channel and expose his depressed inner frustration.”

Blake Berry Davy, who plays Richard Loeb, explained that “getting into the head” of his character, the more dominant of the two, required him not to see Loeb as a criminal but as someone who gave into his guilty pleasure, albeit murder. “Doing something you know is wrong always brings with it at least some slight excitement or nervous energy, and Richard is someone who thrives on that kind of excitement,” he said. “There was one day during rehearsals when I smashed a few plates on the ground with the intention of finding Richard’s specific joy in destruction.”

Davy said playing the mastermind of a cold-blooded murder was intimidating at first, but also fascinating. “It was incredibly freeing to enter the world of someone so withdrawn from the confines of social norms; to explore physical intimacy with no feelings of compassion, to explore something like kidnapping and murder with virtually no remorse or fear of consequences,” he explained.

“Thrill Me: The Leopold & Loeb Story”