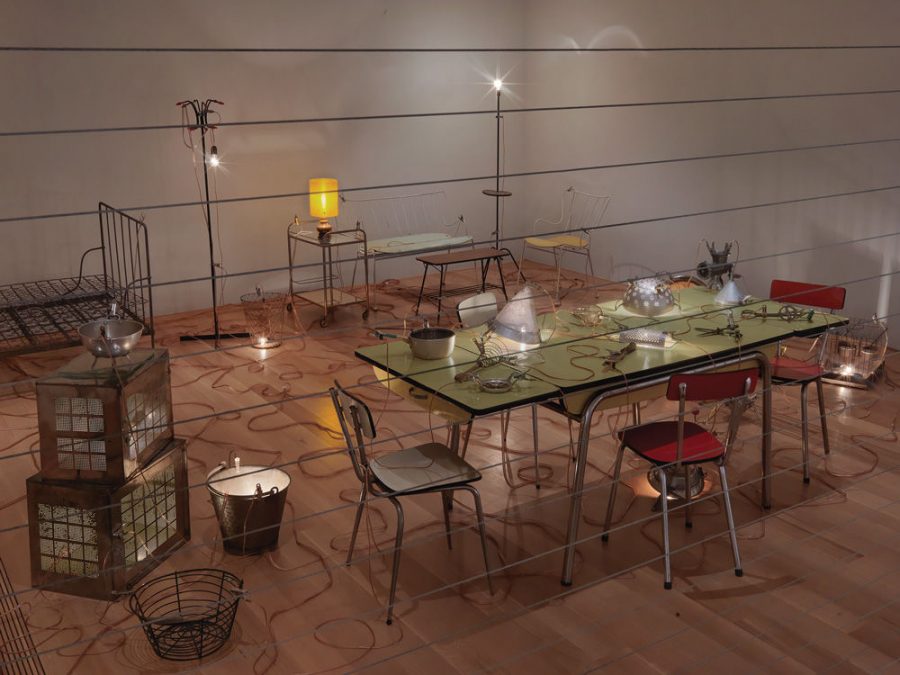 By Stephen Cohen, Special to the Jewish Light

The works of Mona Hatoum, an internationally renowned artist who was born to a Palestinian family in Beirut, give powerful expression to feelings of dislocation, upheaval and confusion that can be experienced on a personal as well as a collective level.

Hatoum, who lives in London, was initially recognized for her video and performance installations, and her exhibition at the Pulitzer Arts Foundation is made up of installations and sculptures.

This is not your regular exhibition, if for you an exhibition shows sweeping, colorful canvases or delicate drawings to which you can relate with immediacy on a sensory level.  Rather, it is one that demands thoughtful engagement.

Viewing these works, you will begin to see the interplay of surrealism, conceptual art, the minimalists of the ’60s and other influences on the artist. Mostly, you need to be open to the experience of the works and to the multiple meanings and messages they contain, and to allow yourself to have them wash over you as you experience and engage with them.

If you do, works such as “Untitled (Wheelchair II),” a shiny stainless steel wheelchair with knife blades for handles, and “La Grande Broyeuse (Mouli-Julienne x 17),”a very large replica of a manual food grinder, suddenly feel a little more discernible, and “Quarters,”a bunk-bed type installation with its evocations of Sol Le Witt’s works,feels less alien or strange.

“Turbulence (Black),” a circle of different size marbles on the floor has an implicit sense of potential fragility and danger. If you have ever felt tempted to touch something that is fragile after you’ve been warned not to, you might feel a similar impulse at the sight of these glass marbles, even while fully understanding the potential consequence of your behavior.

How timely, in terms of current conversations about barriers and border walls, to encounter and engage with “Impenetrable,” an installation made up of hundreds of hanging strands of barbed wire that first appear as an impenetrable cube. Like barriers and border fences that restrain and limit movement, so does this mass of wire. When viewed from the side, you can see that the strands are placed in evenly spaced straight lines,perhaps an illusion to the personal barriers that we have to confront in our lives.

A video installation at the beginning of the exhibition entitled “So Much I Want to Say”shows a series of images of the artist’s face repeating the title of the work as a pair of male hands repeatedly try to cover her mouth. Conceived in 1983, it was intended to be a statement about censorship, but in the #MeToo era, it takes on an additional dimension as a statement of how far women have come in fighting male efforts to control or to limit them.

In the installation “Misbah,”the artist begins with a traditional lantern associated with the Middle East. But instead of the usual perforated designs associated with such lanterns, “Misbah” features perforations of soldiers and explosions. As the lantern rotates on an electric motor, the repeated images cast by the light of the lantern seem to allude to the apparently endless conflict and war to which humankind is subject at any time.

“Homebound” is made up of furniture and household utensils that are linked by electrified wires, which preclude you from entering the home depicted. On the one hand, it might be perceived as a political statement about returning to a place characterized as a home or homeland. On another level, it is possible to be a forced reminder of the folly of trying to return to an idealized place, which either does not, or never really did exist, in the way we might think we remember it.

I was particularly struck by the work “The Grater Divide,” a 7-foot-high representation of a hand-held grater that could be a screen or room divider. As the audio tour of the show so succinctly explains, the perforations of the grater render it functionally useless as a screen, and its barbed surface undercuts assumptions of protection by threatening to inflict harm on contact. It appears from the audio commentary that the artist’s intention was to draw a comparison between a mundane culinary implement and the daily grating reality of the urban environment.

Be prepared for the mundane and the ordinary to be challenged on many levels by this exhibition, which runs through August in the architecturally stunning Tadao Ando designed Pulitzer building.

Stephen Cohen is vice president of special projects at Jewish Federation of St. Louis, but his avocation and passion is art.