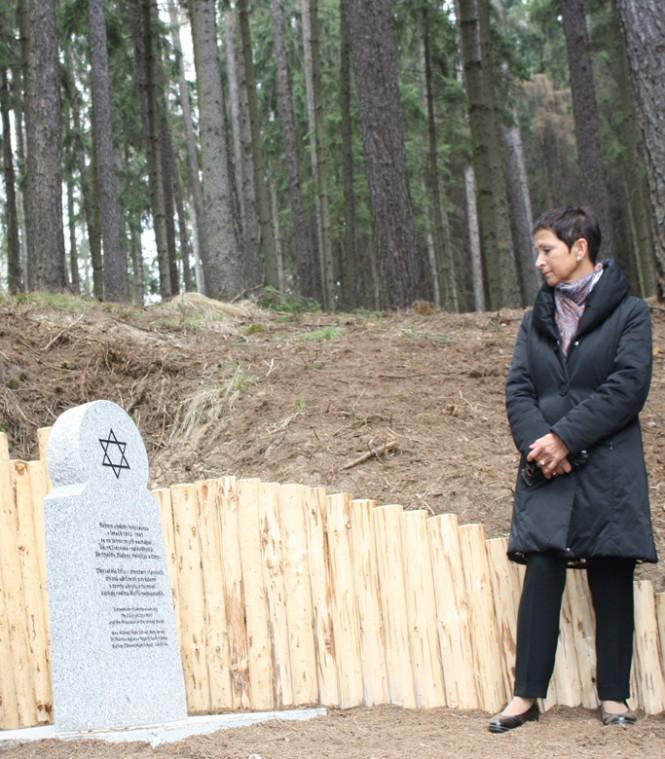 Eva Vavrecka contemplating the horrific living conditions that her mother and grandparents endured in the forest to survive World War II.

TRSICE, Czech Republic — Nearly 70 years after a Czech Jewish family sought refuge from the Nazis by retreating into a nearby forest and relying on non-Jewish locals for help, an American high school teacher has helped erect a permanent monument to their memory.

Last week, several dozen people went to the wooded site where the Wolf family had hid to unveil a modest stone monument that commemorates their struggle to survive and the locals who helped them.

For three nightmarish years during World War II, the Wolf family survived by intermittently hiding in the woods, a friend’s shed and people’s homes — all the while depending on others to provide them with food, fuel and other supplies.

The details of the family’s ordeal were recorded in a detailed diary by son Otto, who was 15 when they went into hiding in June 1942. The villagers of Trsice, which is about 150 miles east of Prague, knew the story. But it was only after Colleen Tambuscio, a New Jersey teacher, brought a group of students to the wooded hideout four years ago as part of a Holocaust study tour that the wheels were set in motion for a proper memorial.

Tambuscio, who teaches a course on the Holocaust, genocide and human behavior at New Milford High School, leads an annual Holocaust study tour to Germany, the Czech Republic and Poland. One of the books she uses in class, “Salvaged Pages,” is a compilation of wartime diaries by young writers that includes an abridged version of Otto Wolf’s accounting of the family’s harrowing plight.

Four years ago Tambuscio realized during the group’s stop in Olomouc that they would be very close to the Wolf family’s forested hideout. With the help of the local Jewish community, they trekked into the woods and managed to identify the family’s cave-like shelter.

Tambuscio said she was deeply moved by their discovery and wondered why it was not marked.

“We asked the mayor why isn’t this marked as a historical marker,” she said. “And they really didn’t have an answer other than they just never really thought about marking it.”

Tambuscio said she started a fundraising effort to collect the necessary $3,000 while also working through the Czech bureaucracy to acquire the necessary approvals for a memorial. Local villagers had no objections, according to Tambuscio, and four years later she and the village had their memorial.

One reason the locals never sought to memorialize the Wolfs’ story is that the aid to them did not come purely out of altruism.

The family’s initial benefactor, Jaroslav Zdaril, known as Slavek in the diary, set up the Wolf family in the forest, brought them food and supplies, and later provided them shelter in a primitive shed. He did so in part because he was in love with Otto’s 22-year-old sister, Felicitas. As his love went unrequited, his delivery of food and supplies gradually became erratic.

After two years, the relationship had become so frayed and the delivery of food so unreliable that the Wolfs were desperate for an alternative benefactor. They found a lifeline in their former housekeeper, Maria Zborilova, who hid them in the attic of her home. The new accommodations were a tremendous improvement in quality of life for the Wolf family – Otto and Felicitas, and their parents, Berthold and Ruzena — but almost immediately Maria’s husband wanted them out, fearing the repercussions if the Nazis found them hiding Jews.

While Maria’s desire to shelter the family initially prevailed, the Wolf family lived in constant fear for nearly a year that her husband would force them out. He eventually did in March 1945.

A dentist the Wolfs knew then helped them find shelter in a farmhouse of the Ohera family — complete strangers to the Wolfs. By now the war was in its final throes, yet there was still plenty of violence and fear. Less than a month before the end of the war, the family was captured by Nazi-sympathizing Kazakhs looking for partisans. Not knowing they had a Jewish family, they kept only Otto, who was then 18 and of fighting age. A few days after being captured, he and others were shot and then put into a barn that was set alight.

With violence and tensions rising, the rest of the Wolf family fled back into the forest for the final three weeks of the war. As fate would have it, the weather that April was miserable: cold and windswept rain left the family muddied, wet and shivering.

Fittingly, the memorial’s unveiling last week took place on a raw, gray morning with temperatures in the low 40s. For Eva Vavrecka, Felicitas’ daughter, it was the first time she had ever visited the wooded site.

Even though she knew the story, Vavrecka told JTA that she nonetheless was astounded by the conditions under which her mother and family were forced to survive.

“It was a difficult feeling, and I was trying to push it away so I don’t get too emotional,” said Vavrecka, 62, of Prague.

Petr Papousek, who is head of the Jewish community in Olomouc, the nearby city, says the villagers deserve recognition for not informing on the Wolf family, even if their silence wasn’t always for altruistic purposes.

“On the memorial it says that the Wolf family was able to hide because the people who lived in the village kept the secret,” he said. “Now when they see the memorial they can be proud of their ancestors who were so brave.”

During the 1990s, the five individuals who actively sheltered the Wolfs were designated Righteous Among the Nations by the Yad Vashem Holocaust Memorial Museum in Jerusalem.

Alexandra Zapruder, author of “Salvaged Pages,” the compilation of young writers’ diaries from the Holocaust, says non-altruistic motives do not diminish the end result. The important thing is that three of the four Wolf family members survived.

Click to login and write a letter to the editor or sign up for the Daily Briefing.