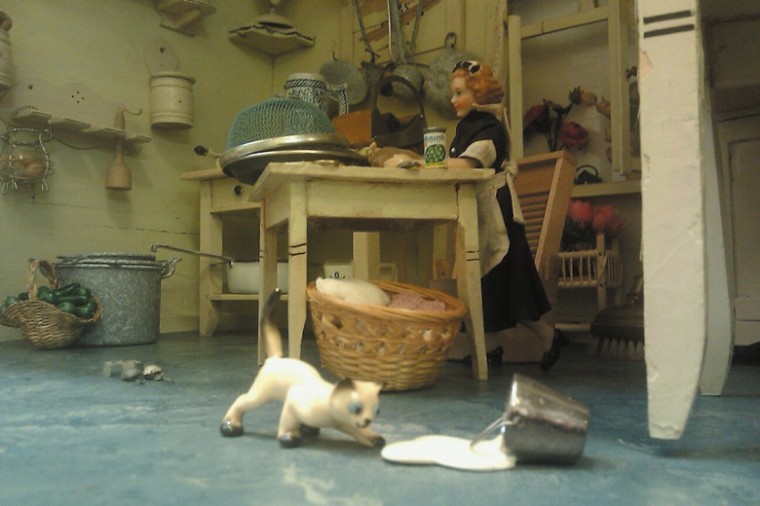 A room inside Lilo Waxman's dollhouse

MORE THAN 40 YEARS AGO I wrote a story about Lilo Waxman’s charming five-room dollhouse, which had not long before arrived from its hiding place in Germany. These miniature dollhouse rooms were handed down starting with Lilo’s great-grandmother in 1852, to her grandmother, to her mother and finally to Lilo, when she was a little girl in Germany.

When Lilo’s family left Germany in 1936, her mother left the dollhouse rooms with a good Gentile friend for safekeeping. Frau Geyer hid the rooms with their complete contents in her house without telling anyone in her family about it. Ten years later, a cousin from New Mexico who was stationed in Frankfurt had the rooms shipped to Lilo’s St. Louis home with all the contents still wrapped in German newspapers. Lilo calls them “Hidden Treasures.”

Lilo created a St. Louis home for these interesting treasures in a specially constructed closet, and used these treasures to help raise funds for various organizations, including Temple Israel. For several years, Lilo has looked for a permanent museum home for the rooms and finally found the right space in the Holocaust and Intolerance Museum of Albuquerque, N.M. where the dollhouse exhibition opened recently.

“I felt like the treasures were really going home as when my family and I came to this country our first stop was Albuquerque, N.M. We moved on to Las Vegas, New Mexico where (my husband) Arnold and I were married in 1936,” said Lilo, truly a girl of the Golden West who has contributed significantly to the Jewish experience in New Mexico.

EVERY FIVE OR SIX YEARS I get to tell you the same corny but appropriate joke.  It always concerns a worthy fundraiser for an important organization. This year it is Hadassah, which is selling the new 2012 Mah Jongg cards in support of its magnificent organization.

Mah Jongg is a game invented and played by the Chinese for 4,000 years with four rules. The Jews, on the other hand, have played Mah Jongg for four years with 4,000 rules.

SUNDAY IN THE PARK WITH GEORGE, Steven Sondheim’s Pulitzer Prize winning musical, opens tonight at the Repertory Theatre of St. Louis, where it will run through Jan. 29.  If you have never seen this gem of a show, do take advantage of its appearance at the Loretto-Hilton. With a large, talented cast, it will appeal to both your eyes and your ears, with some of Sondheim’s best music and words.  It is based on the career of Impressionist painter George Seurat’s work and the Pointillism technique incorporating small dots of color to create beautiful art. For tickets, call 314-968-4925 or visit www.repstl.org.

WHILE I WAS IN HIGH SCHOOL I met an interesting, tall, blonde guy who had moved to St. Louis from Winnipeg, Canada with his family. He was Gideon Schiller, a recent law school graduate, a punster and a fun loving man who remained pretty much that way until his death at the age of 95 on Dec. 25.

In the stacks at Washington University is a one-act play by Lois Baer (that’s me) named “Special Legislation” based on Gid’s struggle to become an American citizen and to be allowed to take and pass the bar exam, which he did.  Now you don’t have to read the play – you know the plot. Gideon was a brilliant thinker who shared his thoughts generously. He was unique and will be sorely missed.