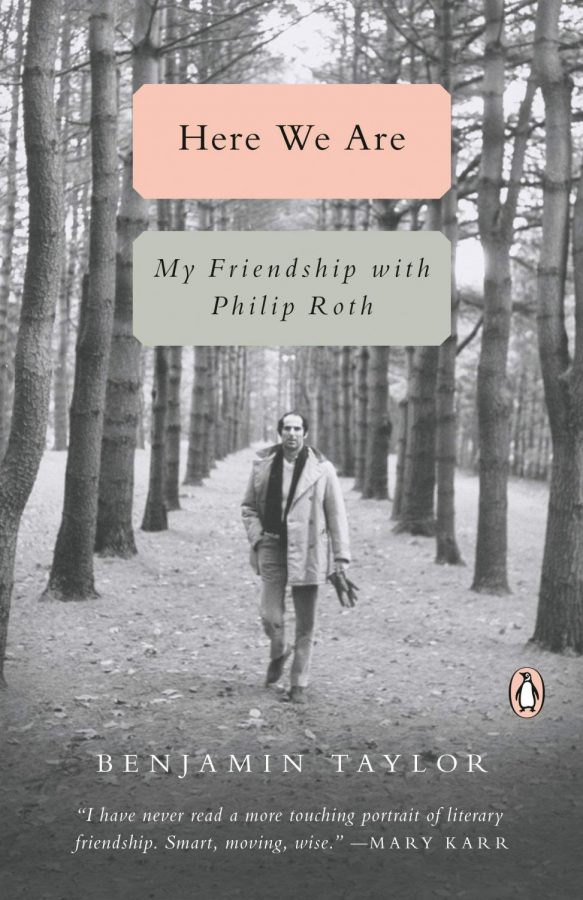 By Dale Singer, Special to the Jewish Light

Not far from where Philip Roth lived on the Upper West Side of Manhattan, near the Museum of Natural History, stands a monument that lists the names of all Americans who have won a Nobel Prize.

One fall day, according to this poignant memoir by Benjamin Taylor about his long relationship with the celebrated author, he and Roth were examining the monument when what Taylor calls a “gnarled woman” approached and called out:

“Looking for your name? It’s not there!”

Of course, though he was often mentioned as a top candidate for the prestigious literary honor, Roth never won a Nobel before he died in 2017, and every autumn he was disappointed time and again. Taylor says it “gnawed Philip to be denied that particular laurel. He took to calling it the Anybody-but-Roth Prize. October was the cruelest month.”

That kind of insight into the personal life of a very public artist makes “Here We Are” a particularly special remembrance. Taylor, a respected writer who once taught at Washington University, quotes a lot from Roth’s 31 books, but this is far from a compendium of the author’s greatest hits.

Instead, it is a keenly felt trip into his psyche and the background and memories that made him one of the best writers of the 20th century, Nobel or no.

How does Taylor justify his opinion? Here is how he defines “the particular thing called ‘Rothian’: Alongside the tough-mindedness of the man’s way forward – through independence, sex, love, hatred, doubt, creativity, understanding, bewilderment, guilt, shame fear, grief – alongside this well-known tough-mindedness there is the Rothian tender-heartedness, the momentary way back out of all complexity back to when he’d just been Bess and Herman’s boy, not yet also Franz Kafka’s and Fyodor Dostoyevsky’s and Louis-Ferdinand Celine’s boy, too.”

Not that Roth himself would paint his talent in such exalted, academic terms. Taylor recalls that early in their friendship, the author told him this:

“What I care about is individuals enmeshed in some nexus of particulars. Philosophical generalization is completely alien to me – some other writer’s work. I’m a philosophical illiterate. All my brain power has to do with specificity, life’s proliferating minutiae.”

But “Here We Are” isn’t primarily a literary analysis. What comes through primarily is a rich humanity, a deep bond between two men who have no problem sharing thoughts and feelings and experiences. Throughout the book, Taylor shows this intimacy by always referring to his subject as Philip, never Roth.

Taylor also passes along Roth’s personal techniques for getting the writing just right. Discussing “The Plot Against America,” a masterwork that takes on added richness in these tough times, Roth relates that he spent four years on the book, trying to re-create his native Newark in the days of FDR, “and every night before drifting off I’d say to myself, ‘Don’t invent. Remember.’ ”

As for the Judaism that enriches and permeates almost all of Roth’s work, Taylor quotes “the taxonomy of American Jews” as related in “I Married a Communist.”

“There are the affable Jews – the inappropriate laughing Jews, the I-love-everyone-deeply Jews, the I-was-never-so-moved Jews, the Momma-and-Poppa-were-saints Jews, the I-do-it-all-for-my-gifted-children Jews, the I’m-sitting-here-listening-to-Itzhak-Perlman-and-I’m-crying Jews” and so on.

But one evening, when Taylor starts a conversation with “What this country has given the Jews,” Roth cuts him off and immediately replies:

“It’s what the Jews have given this country. In the sciences, the arts, in medicine, in philanthropy. And do you know why? Because night after night, year after year, decade after decade, we’ve gone to bed sober. It’s as simple as that.”

Above all, it is Taylor’s admiration, respect and love for Roth that come through in “Here We Are,” on every single page.

Recalling his visit to a Manhattan funeral parlor after Roth’s death, he writes:

“To talk daily with someone of such gifts had been a salvation. I’m not who I’d have been without him.”