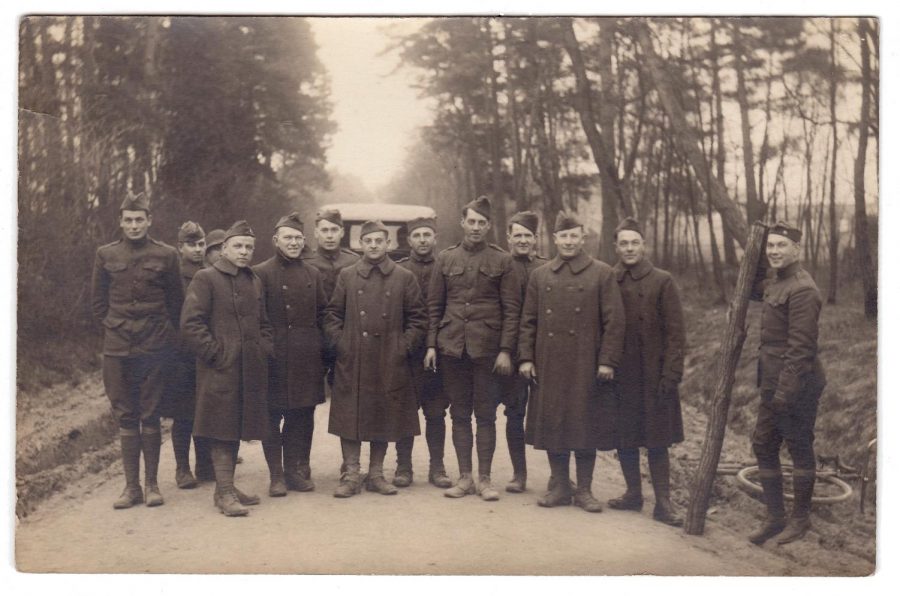 Jacob Lavin (center) with group of American Expeditionary Forces in France. Lavin was one of the American Jews who fought in World War I.

In August 1918, Sgt. William Shemin’s platoon was caught under heavy fire at the Vesle River in Bazoches, France. All officers above Shemin were injured or killed, and evacuation was the platoon’s best chance of survival.

Instead, Shemin, only 19 years old, ran alone across 150 yards of open battlefield three times in broad daylight to save the wounded, including his best friend Jim Pritchard. Then Shemin led his fellow soldiers to safety, but not before machine gun fire pierced his helmet, hitting his left ear and leaving him partially deaf.

Shemin is a war hero and, thanks to his daughter Elsie Shemin-Roth, his story is told through items such as his Medal of Honor and combat helmet in “For Liberty: American Jewish Experience in WWI,” a new exhibit at the National World War I Museum and Memorial in Kansas City.

The exhibit, which runs through Nov. 11, tells the stories of American Jews on the battlefield and at home during the Great War.

More than 250,000 Jews like Shemin served in the American Expeditionary Forces during the war, the museum says. Shemin-Roth said the exhibit is immensely important because it highlights an untold era of American Jews’ heroic legacy.

“This is a gift to society to physically show what the contribution of the Jewish people is to our country that we love so much,” she said. “It’s always sad that anti-Semites say all over the world, not only in the United States, that Jews don’t fight. … That’s not true at all.”

Shemin-Roth witnessed this anti-Semitism when she learned that her father, who died in 1973, was never awarded the Medal of Honor for his actions in WWI.

“He was told that no [Jew] would ever receive the Medal of Honor,” she said.

For 13 years, she fought to have her father recognized, and she finally succeeded in 2015 when he became the 17th  Jewish American soldier to receive the Medal of Honor, according to the Jewish War Veterans of the USA. The medal was awarded to Shemin-Roth by President Barack Obama at the White House. She said “the award was 100 years late.”

“There’s a Yiddish word, ‘kvell,’ which means you feel very proud of something,” she said “When I had seen the whole exhibition was coming to Kansas City, all I could do was kvell.”

Shemin’s Medal of Honor, Distinguished Service Cross, Purple Heart and uniform are showcased at the museum.

Shemin was a child of Russian immigrants, and his daughter said she hopes the exhibit shows how important immigrants are to the United States in today’s climate.

“[So many] of those that served in World War I were immigrants, very often fighting against their own native country,” she said. “Our country was built and continues to be built with the input of immigrants. … This display goes much further than just looking at artifacts. You have to dig underneath and really take a look and come to your own conclusions.”

Doran Cart, senior curator of the National World War I Museum and Memorial, said immigration is a theme of the exhibit.

“In 1917, there are documents and letters that are talking about how Jewish immigrants are not being allowed in the country and being mistreated,” he said. “There’s a cartoon of what appears to be a wall that is keeping refugees and immigrants out of the United States. In that aspect, it really makes the exhibit prescient to today.”

Cart said the exhibit is worth attending to see the stories of soldiers often lost in the crowd of history. He said other notable items on display include a handwritten 1917 draft of the Balfour Declaration, which was the basis for the creation of a Jewish State in Palestine, and the draft card of the famous composer Irving Berlin.

The exhibit items “give a better understanding of the Jewish American experience” in WWI,” Cart said.

Shemin-Roth said she hopes the exhibit shows people what the Jewish community has contributed to the country.

“This is what we have done,” she said. “We have had hardship. We have resiliency. We have creativity. We have incredible bravery, generosity, and most of all we have love of our country. That’s what I would say this exhibition shows.”