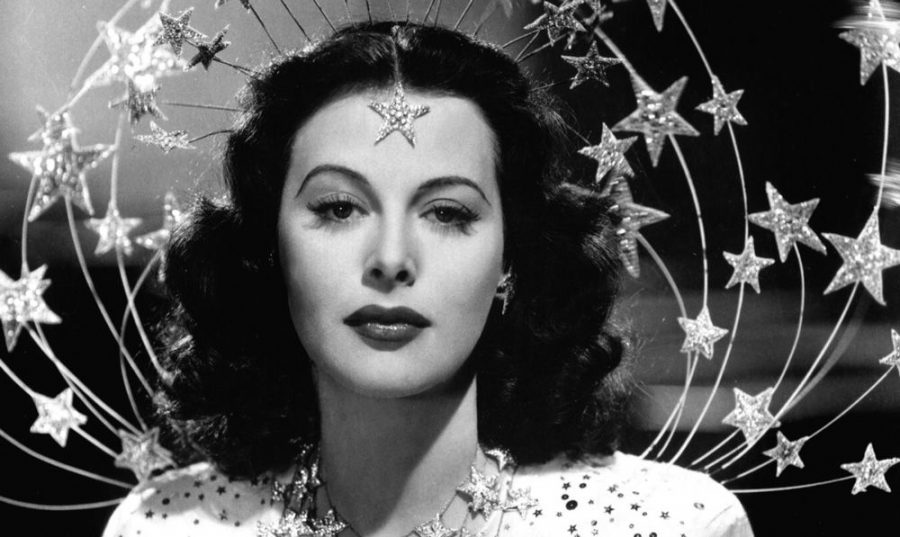 ‘Bombshell,’ a documentary on Hedy Lamarr that was part of the recent St. Louis Jewish Film Festival, is now available on Netflix.

At the Movies and on Netflix:

“Jurassic Park: Fallen Kingdom” is the fourth sequel since “Jurassic Park,” the 1993 STEVEN SPIELBERG blockbuster, posited that dinosaurs could be brought back from extinction by using their ancient DNA.  The premise was interesting, but what knocked everyone’s socks off was the tremendous computer generated (“CGI”) special effects, which made the dinosaurs come alive on the big screen. Reviews for “Fallen” are mixed at best, but many mirror this BBC review: “The plot might be ludicrous and the CGI below par, but the latest dinosaur blockbuster is good old-fashioned summer entertainment.”

As the last sequel ended, the island theme park where the dinosaurs live has been destroyed so the dinos now fend for themselves in the jungle. As the new film opens June 22, a long-dormant volcano on the island comes to life, threatening to make dinos extinct again. The supporting cast includes TED LEVINE, 61 (“Monk”). JEFF GOLDBLUM, 65, who co-starred in the first two “Jurassic” films, has a small, but important cameo. The script was co-written by COLIN TREVOR-ROW, 41.

Reviews are great for “Won’t You Be My Neighbor?,” a documentary now playing at Plaza Frontenac Landmark Theatres about beloved children’s program host Fred Rogers (1928-2003). Rogers, an ordained Presbyterian minister, was always sensitive about other faiths, including Judaism. Just one example: His 2000 book, “The Giving Box: Create a Tradition of Giving with Your Children,” openly credited as its inspiration the Jewish tzedakah box, which promotes savings and charity.

Now streaming on Netflix is “Bombshell,” a documentary about the life of actress and inventor HEDY LAMARR (1914-2000). Few persons under 50 have even heard of Lamarr, but in her heyday, circa 1940, she was widely considered the most beautiful Hollywood actress alive. In the last 25 years, another side of the actress has become known—her talent for high-tech invention. Lamarr, the child of affluent, assimilated Viennese Jews, led an extraordinary, improbable life. Via interviews with her three children, and many others (including MEL BROOKS, 91), a full portrait of Lamarr emerges. Even though it is not a happy life story, this well-crafted film is really worth your time.

Much more contemporary is the new Netflix comedy rom-com film “Set It Up.” It began streaming on June 15. ZOEY DEUTCH, 23, and Glen Powell co-star as assistants to two high-powered executives (Taye Diggs and Lucy Liu) who run them ragged. They decide to orchestrate a romance between their bosses in the hope that will calm them down.

Now available via video-on-demand is the feature film “The Year of Spectacular Men.” It was written by Zoey’s sister MADELYN DEUTCH, 27, and directed by their mother, actress Lea Thompson (perhaps best remembered for playing the young version of Michael Fox’s mother in “Back to the Future”). Deutch, who describes the film as semi-autobiographical, plays lead character Izzy Klein. We follow Klein as the recent college grad suffers through a series of bad romantic relationships and leans on her younger sister and her mother for support (played respectively, by sister Zoey and Thompson). The Deutch sisters, with their mother’s total support, were raised Jewish and had bat mitzvahs. Their father is producer/director HOWARD DEUTCH, 67.

Comedian HOWIE MANDEL, 62, hosts the new Nat Geo Wild series “Animals Doing Things” (it premiered on June 16; new episodes Saturdays at 8 p.m.). The show features the best, never-before-seen animal videos submitted to the popular Instagram account “@AnimalsDoingThings.” Each video is hosted by Mandel, who provides funny narration and witty commentary before and/or after the videos.