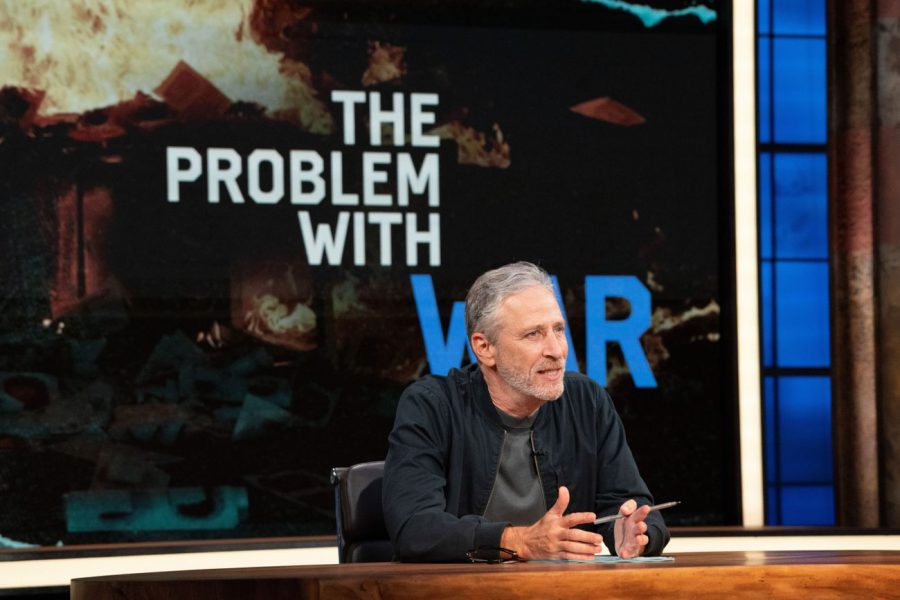 The title of Jon Stewart’s new show might have had a double-meaning for almost anyone else.

“The Problem with Jon Stewart” sounds like the beginning of a rant by your conservative uncle, or maybe a gripe from a pedantic comedy critic. In its current usage, there is little publicly problematic about the diminutive host, beloved for shepherding viewers through the Bush years and highway goats to safety.

To be sure there are some problems, both involving former “Daily Show” writer Wyatt Cenac, who recently and not-so-subtly accused Stewart of stealing the premise of his HBO show, and in 2015, said that Stewart screamed at him when he questioned the white host’s plan to do a Herman Cain impression.

In the main, though, Stewart has only grown more esteemed since the end of his “Daily Show” tenure. He continues to advocate for 9/11 first responders. He directed a tedious drama about an Iranian political prisoner and a ponderous comedy about the noxious elitism of campaign consultants.

Even if he’s not always funny, he’s lived up to the promise of a famous viral clip, in which he called out a young Tucker Carlson on “Crossfire” for doing damage to our democracy. Earlier this month, when many re-watched his first monologue after September 11, it was recalled as one of the few pieces of media from the time that has aged pretty well. Because Stewart has aged well.

I mean, he would argue otherwise. “This is how I look now,” Stewart, looking considerably more grizzled — and casual — says at the top of his first show, which debuted Thursday on Apple TV+. “I’m not happy about it either. Very few people would be happy looking like an anti-smoking poster.”

It’s a C+ joke, and that, if one were to nitpick, may be the problem. The comic in winter has refined a moral clarity that often occludes humor. There aren’t too many yucks in the debut episode, about veterans living with — and failing to get V.A. treatment for — chronic and terminal illnesses developed from exposure to “burn pits” containing human and medical waste and lit on fire by jet fuel.

Stewart has changed his format to allow more time to his topic, establishing the problem of the day before moving on to a panel of people affected by it. Intercut throughout are chats with his writer’s room. In the debut episode Stewart does his first remote interview, where he grills the secretary of Veterans Affairs.

It’s hard not to think of John Oliver’s “Last Week Tonight” while watching Stewart’s new show, but, to my taste, it is far more palatable than the latter show’s endless simpering and battery of ridiculous analogies. (One can imagine the Oliver riff running something like this: “The V.A. and Department of Defense are using their own researchers to determine what causes cancer in wars? That’s like Willy Wonka saying an internal audit found that Oompa Loompas love singing and dancing for children — and only asking the children! You’re a monster, Wonka!”)

Stewart manages to split the difference. His delivery has stayed sharp — his introduction of an archival clip from “Pert Plus model Dan Rather” cracked a smile — and has gained something in the interim.

At one point he jokes about showing up to the Comedy Cellar where he expects his fellow comics to call him “Mother Teresa.” We’d be wrong to think that Stewart is singularly virtuous, but it’s even more misguided to think he’s just virtue signaling.

Given latitude by a subscription streaming service, he is choosing to devote his 40-plus minutes every two weeks to something we should know about. Like Larry Wilmore did on his short-lived “Nightly Show,” he is ceding the floor to a panel of people with authority. Like Oliver’s “Last Week” and Cenac’s similarly titled “Problem Areas,” he’s drilling down on one topic plaguing our country. But in a way that only he can — and a way we’ve missed — he indicts in monologues that would leave Sorkin-written lawyers stammering.

“Veterans are dying and going bankrupt because the D.O.D. and the V.A. are forcing them to indisputably prove a connection that they already internally admit exists,” Stewart said. “And what makes it so incredibly demoralizing is they are holding veterans to a standard of proof far beyond the one our own government used to send them to war in the first place.”

He then cut to the perfect clip — Bush saying America can’t wait for a smoking gun in the “form of a mushroom cloud” to go to war in Iraq.

“They couldn’t wait for the final proof in their effort to defend us all from being exposed to the terrible health effects of a toxic cloud. We went there to find weapons of mass destruction, and when they weren’t there, we made our own.”

Stewart’s gift for finding the perfect piece of video evidence is later deployed in his interview with the head of the V.A, Denis McDonough. When McDonough says he only cares about what veterans think of the job he’s doing, Stewart shows him a clip from his show, where a retired Army Sergeant named Isiah James condemns the military’s neglect of men like him after their service. Stewart’s platform elevated the testimony of a veteran all the way up to the top after years of being ignored by the V.A. — achieving something he couldn’t do alone — and even got McDonough to agree with him.

If the new show can accomplish this, any laughs are just a bonus.