Jews in the show on Opening Day 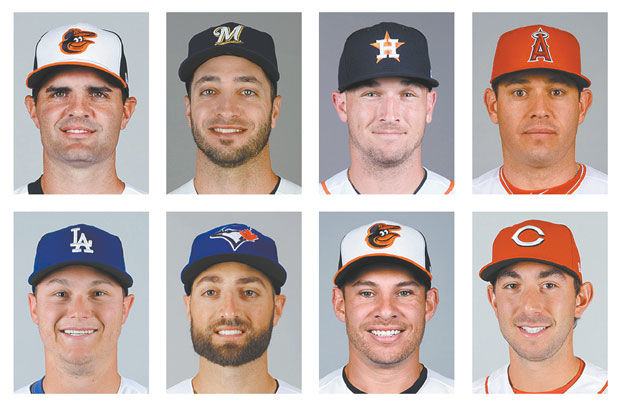 The following Jewish players were on a major league roster as of opening day:

RYAN BRAUN, 34, Milwaukee, outfielder/first base. This six-time All-Star and National League MVP (2011) had a decent 2017 season, during which he hit his 300th home run.

ALEX BREGMAN, 24, Houston, shortstop. Bregman had a very good 2017 season, hitting especially well in the second half. He turned in a stellar performance in the World Series, which the Astros won.

IAN KINSLER, 35, Los Angeles Angels, second base. Kinsler, a four-time All-Star, had a weak bat in 2017 and was traded from Detroit to the Angels in the off-season.

KEVIN PILLAR, 29, outfielder, Toronto. Pillar had a very good season with the bat in 2017, hitting a career-high 16 home runs.

DANNY VALENCIA, 33, Baltimore, first base/outfield. The much-traveled Valencia had an OK 2017 season with Seattle. A free agent, he was signed by Baltimore and earned a spot with the club in spring training.

ZACK WEISS, 25, Cincinnati, relief pitcher. This rookie came back from surgery on his elbow late in 2016.

All of these players have at least one Jewish parent and identify as Jewish or secular. I know the following players had a bar mitzvah: Bregman, Pillar, Valencia and Weiss. The others did not, with the exception of Bleier, whom I am unsure about. Pederson did play for Israel in the World Baseball Classic.

Two important footnotes: Former major league player GABE KAPLER, 42, is the rookie manager of the Philadelphia Phillies. Kapler managed the Israeli team in the 2013 World Baseball Classic. And RYAN SHERRIFF, 27, a relief pitcher who was called up by the Cardinals last August after pitching in more 200 minor league games, was back in the minors on opening day despite pitching pretty well last year. But he was called up the next day to replace an injured pitcher. As I write this, he’s still with the Cardinals, but he’s likely to shuttle between the minors and the big club. Sherriff’s maternal grandparents were Holocaust survivors, and he pitched for Team Israel in the World Baseball Classic last year.

SCARLETT JOHANSSON, 33, reportedly has signed to co-star in the film “Jo Jo Rabbit,” playing a non-Jewish German woman who hides a Jewish girl in her home. Things turn dicey when her 10-year-old son, a Hitler Youth member, discovers her secret. The film is directed and written by New Zealander TAIKA WAITITI (pronounced Tie-Co Why-Tee-Tee). The son of a Jewish mother and a Maori (native Polynesian) father, Waititi has the “juice” now to make any film he wants. First, he made several comedies and dramas in New Zealand that had one thing in common: they made money and were critical hits. So, he was tapped to direct “Thor Raganorok” (2017), a big-budget Hollywood flick. It was a monster box-office and critical hit.

The “Jo Jo” plot is weird, but Waititi has made weird work before. The young boy invents an imaginary friend (played by Waititi), who is a combination of his missing father and Adolf Hitler (!). The boy’s sense of Hitler is informed by Nazi propaganda so that this imaginary Hitler is gentle and semicomical. My guess is that the dramatic climax of the film will come when events force the boy to finally realize that his fantasy Hitler was a monster in real life.

“Super Troopers 2,” which opens April 20, is a sequel to a 2011 film about five wacky Vermont State Troopers. This light comedy co-stars EMMANUELLE CHRIQUI, 42 (“Entourage”). She’s a Canadian of Moroccan Jewish background. Rob Lowe and Lynda “Wonder Woman” Carter also appear in the comedy. Coincidentally, both have Jewish spouses, and their respective children were raised Jewish.