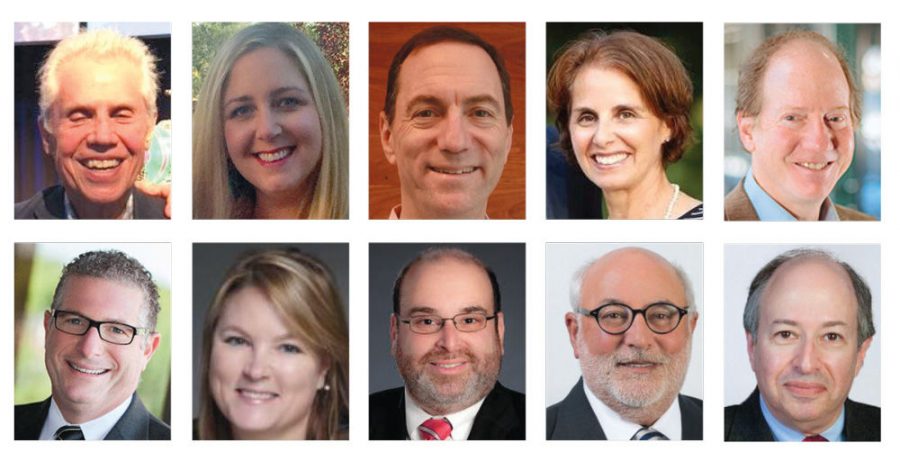 Former St. Louis resident Aaron Lubin has been  recognized by the Little Rock (Ark.) School District as Outstanding Mentor of the Year for the Volunteers in Public Schools Program. He was also awarded the Mission Possible Award for his work with high school students through the Junior Achievement Program. Currently living  in Little Rock, Lubin has been mentoring students and coaching principals for the past 20 years. He is founder and president of Executive Recruiters Agency Inc. and continues to consult with businesses, executive recruiting  and executive coaching.

Erin Slutzky recently played in the USA Racquetball National Junior Olympic Championships in Des Moines, Iowa. Juniors from across the country  competed in 30 divisions for boys and girls in singles and doubles. Erin won two silver medals and, by making the finals, received a one-year appointment for the U.S. Junior National Team. In the 16-and-under division, she placed second. Erin trained with the team at the Olympic Training Center in Colorado Springs last month and will be playing in the Junior World Championships in San Luis Potosi, Mexico, on Nov. 11-18. Daughter of Steve Slutzky and Elizabeth Stroot of Chesterfield, Erin is a junior at Parkway West High School and attends Congregation Shaare Emeth. She plays for the 2017 and 2018 national champion Parkway West Racquetball team. She also plays for the Missouri State High School Racquetball Association.

Former Clayton resident Amy Berger, 36, has been named to the seventh annual “Double Chai in the Chi: 36 Under 36” list of young Jewish movers and shakers in Chicago. The list spotlights the faces of Chicago’s Jewish future and recognizes the contributions of this generation. Berger is one of the professionals noted for making a difference through her work, giving back in her free time and earning distinction in the Jewish community and beyond. She is the senior development manager of WITS (Working in the Schools).

Jenny Wolkowitz is senior associate director for Parent Engagement and Philanthropy for Washington University’s Alumni and Development and a past president of the St. Louis Jewish Light Board of Trustees.

Psychological Associates, a firm focused on the performance and potential of leaders in organizations of all industries, has named Jeff Lefton chief operating officer. He will oversee the business end of human resources, information technology, legal, operations and marketing.

Douglas Kolker has been promoted to partner of Mueller Prost CPAs + Business Advisors. A member of Shaare Emeth, he is the firm’s director of research and experimentation tax credit services.

Julie Berkowitz, Thomas Glick and the Capes Sokol law firm will be recognized by Legal Services of Eastern Missouri as For the Common Good award winners Aug. 23. They are being honored for their dedication and commitment to legal services. Berkowitz, who is receiving the F. Wm. McCalprin Pro Bono Award, is an elder-law lawyer at her namesake firm. Glick, who is receiving the Robert Walston Chubb Award, is in practice at his own firm. He is the immediate past president of Legal Services’ board of directors. Capes Sokol has been a key pro bono partner with Legal Services and is receiving the Gerald R. Ortbals Law Practice Award. The firm staffs a legal clinic at the Grace Hill Women’s Business Center and supports Legal Services by providing annual funding, event sponsorship and other key support.

• Hirshberg (Central 1990) is a global entrepreneur committed to philanthropy and giving back to others.

• Kokesh (Central 1968) has had a career in running and biathlon. He is an editor, writer and video producer for Biathlonworld magazine and Biathlonworld.com.

• Lasky (Central 1993) has spent 20 years as a cinematographer for Pixar Animation Studios in the San Francisco area.

• Merschen (North 1974) is the founder of Myriad/MMGY Global, an international firm that specializes in providing strategic direction and tactical solutions for the travel and tourism industry.

• Schiff (West 1988) is a stop-motion animation supervisor at Laika Entertainment. Among the films he has worked on are “ParaNorman,” “The Boxtrolls” and “Kubo and the Two Strings.” He has received a primetime Emmy Award for outstanding individual achievement in animation.

• Solomon (North 1974) is a versatile voiceover artist on network and cable television. In the past year, she has worked with “Jimmy Kimmel Live” and “Late Late Show with James Corden.” She also narrates documentaries for National Geographic, Discovery and Smithsonian Channel.

• Vermont (North 1987), a former Jewish Light Unsung Hero, is a pediatrician at Mercy Clinic in Hazelwood and a physician provider at the newly opened Washington University Transgender Center at St. Louis Children’s Hospital. She has dedicated herself to lobby for the needs and rights of the transgender community.

Michelle Nobbe is the event sales manager at Topgolf St. Louis. A member of United Hebrew, she is responsible for selling the Topgolf experience and working  with guests to build custom events. Nobbe’s primary focus is to work with corporate clients and build the relationships through community networking.